I Attended A Whipping Ceremony In Ethiopia 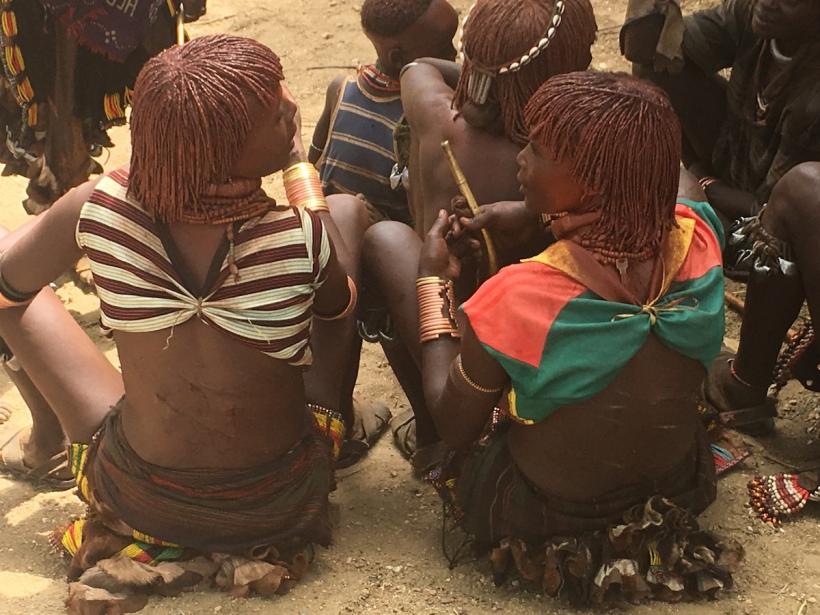 The crack of the whip on flesh is a sound I won’t easily forget. (image courtesy of the author)

A few weeks ago, my husband and I traveled to the southern Ethiopia as part of an extended trip we are taking around the world. We spent six days in the Omo Valley, a part of the country composed mostly of small villages where different tribes live and work on their farms. Tourism is just starting to move into this area of the country, but most of the Omo Valley remains untouched by Western influence and is one of the few parts of the world where African tribes still exist.

As part of our tour, my husband and I had the chance to witness a “bull jumping ceremony,” which is a rite of passage for tribal boys before they marry. The boys must run across the backs of bulls naked four times without falling to be successful, and once they pass this test, they go from being boys to men, ready for marriage.

Though the ceremony may sound strange to Westerners, the substance of it seems innocuous enough — sure, the boy could fall during the jump, but is unlikely to sustain serious injuries (save for a bruised ego). However, before the kid jumps, women and girls in his family must partake in what is known as a “whipping ceremony.” Other men in the village who have recently completed their bull jumps take on the roles of “whippers,” and use sticks fashioned into makeshift whips to hit the women and girls. The whipping is supposed to signify women’s strength and their commitment to the boy who is jumping. The more whipping, the better, because scars from the wounds are also considered beautiful and desirable in this tribe’s culture.

The crack of the whip on flesh is a sound I won’t easily forget. The men doling out the whips didn’t hold back either — they walloped these women, enough to draw blood that dripped all the way down some of the women’s backs. As I watched, I concentrated on the women’s faces, for any sign of distress, pain, or reluctance, but I saw none. They looked proud, defiant even, not so much as flinching as the sharp stick cut into their backs.

As a feminist, violence against women is an issue I care about deeply, and one I have worked to raise awareness of in my professional career as a writer and communications strategist. I have written extensively about rape culture in military institutions, about sexual assault on college campuses, and about populations particularly vulnerable to intimate partner violence, like immigrants. In college, I volunteered at a domestic violence organization outside of Providence, Rhode Island, and spent time as a court advocate for survivors of domestic abuse.

Part of what has shielded me from violence is my privilege.

Even though violence against women occurs in every stratum, including the white upper-middle-class community that surrounded me, it was underground, safe from the earshot or eyesight of neighbors.

So it was in this context that I walked with my husband and our guide into the whipping ceremony. I knew what I was about to see, but I was woefully unprepared for how I would feel. The first woman I saw get whipped already had deep scars all over her back, from previous ceremonies. Part of the tradition calls for women and girls to beg the men to whip them. They are supposed to ask to get whipped and antagonize men to hit them harder. Deeper scars show higher intensities of commitment to the men in these women’s families.

The crack of the whip on flesh is a sound I won’t easily forget. The men doling out the whips didn’t hold back either — they walloped these women, enough to draw blood that dripped all the way down some of the women’s backs. As I watched, I concentrated on the women’s faces, for any sign of distress, pain, or reluctance, but I saw none. They looked proud, defiant even, not so much as flinching as the sharp stick cut into their backs.

I walked into the ceremony with a commitment to very consciously avoid imposing my own judgments on the women and men participating in the whipping ceremony.

My guide had told me that the women and girls were extremely happy to participate in the ceremony, because of the reasons mentioned above; enduring the whipping showed their commitment to their families, and the scars were considered beautiful. Also, the women related to the boys jumping over the bulls were happy to celebrate his initiation into manhood and his intention to marry. It was a joyous occasion for all, I was told.

And yes, the women did seem happy, as they danced and sang in between taking turns getting whipped on their chests, stomachs, and backs. But all I felt watching them was pure terror and anxiety. I had to hold myself back from following my gut instinct to run out there and put myself between the stick and the woman. I cried when I watched a pregnant woman get whipped on her chest and back, and I sobbed when a woman, who had to be at least 70, stepped into the ring, offering her back to the boy with the stick.

As an American feminist, I know how dangerous it can be for Western feminists to critically analyze the practices and behaviors of other cultures, and I was keenly aware of how my Western sensibilities could affect the way I was perceiving and interpreting the whipping ceremony. Western feminists have been criticized for regarding some cultures’ treatment of women as backward, the products of ignorance and a lack of education, a barbarism that emerges in the isolation of tribes from civilization.

The whipping part of the ceremony happens intermittently throughout the day, so there are breaks in between the whippings. But even during these breaks, my anxiety levels remained high. I couldn’t concentrate on what my guide was saying and kept nervously looking around, never turning my back to any man or boy I saw carrying a stick. I felt that at any moment, someone was going hit me with a whip. I know that sounds illogical, but I felt a profound sense of being unsafe — like violence could strike me at any second.

After posting my account of the whipping ceremony on Facebook, a former professor of mine shared her own experience of witnessing a female circumcision ceremony in Kenya, also known as female genital mutilation. According to my professor, the girls participating in these ceremonies were jubilant, overjoyed to get their clitorises cut off because it would signify they were finally “real” women. The cost of foregoing circumcision is high and often means being shunned by the community, with little to no chance of marriage.

While whipping carries far fewer physical consequences than circumcision, the symbolic consequences are similar: both practices send the message that violence against women is not only acceptable, it is necessary for them to be considered real and proper women by society’s standard.

Part of what allows communities to justify these instances of violence is that the women and girls ostensibly want to participate in these ceremonies and are happy to get whipped or circumcised. Women begging to be beaten and antagonizing men to hit them harder is a way to exonerate men from perpetrating the violence — how can they be blamed for hitting these women and girls when they literally asked for it?

The Ethiopian government has made attempts to abolish whipping ceremonies, as well as other violent traditions practiced in the Omo Valley, but with very little success. According to the guides I talked with, the tribes have resisted attempts to stop these ceremonies, which they deem critical to the preservation of their culture and way of life; they resent the government intrusion.

As an American feminist, I know how dangerous it can be for Western feminists to critically analyze the practices and behaviors of other cultures, and I was keenly aware of how my Western sensibilities could affect the way I was perceiving and interpreting the whipping ceremony. Western feminists have been criticized for regarding some cultures’ treatment of women as backward, the products of ignorance and a lack of education, a barbarism that emerges in the isolation of tribes from civilization. 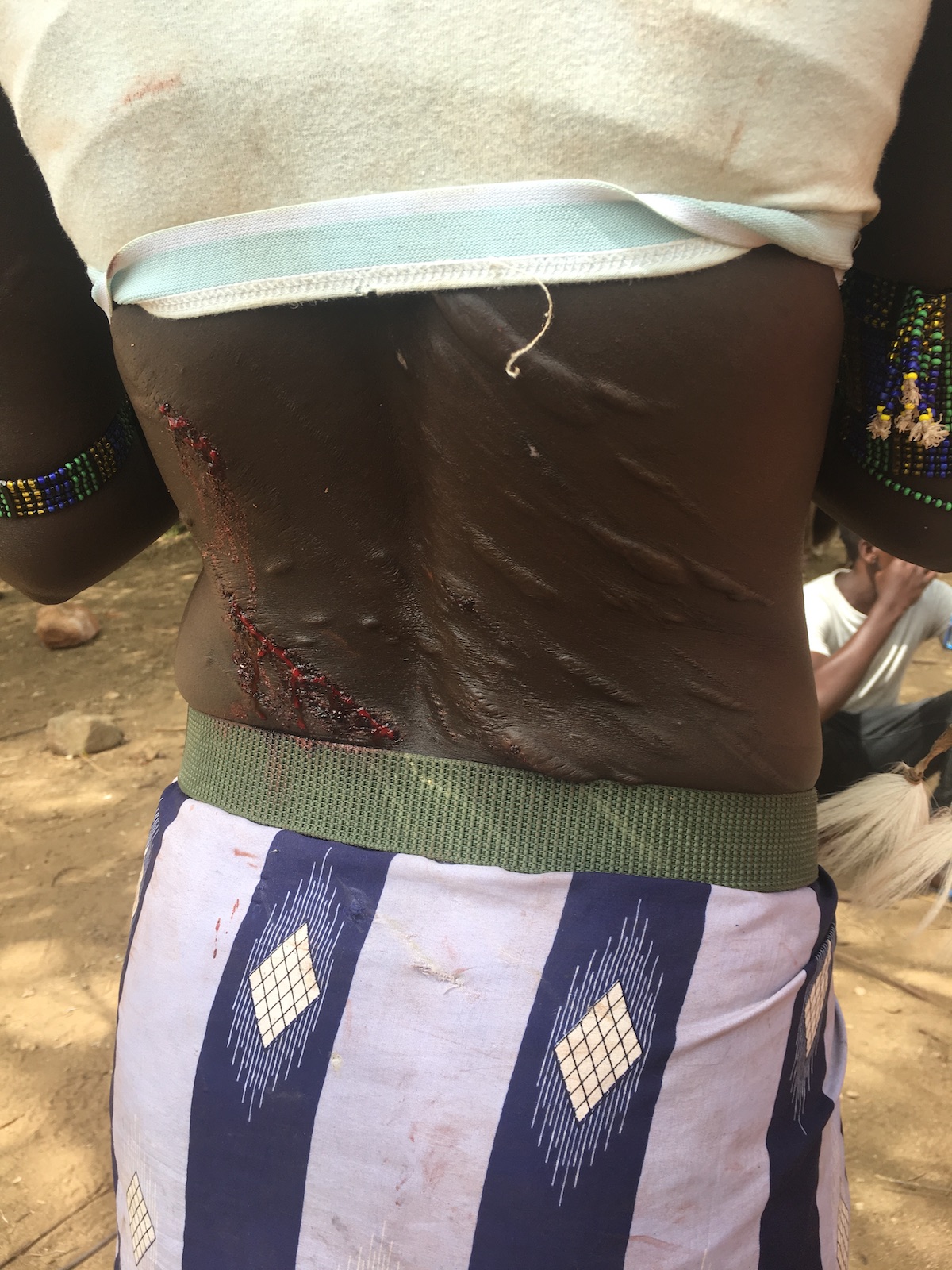 Western feminists have also been accused of taking a paternalistic, patronizing approach to women in third world countries, attempting to “save them” from practices considered uncivilized or barbaric. Unsurprisingly, women in these countries have not been so keen to engage with Western feminists under these terms, which they perceive as disrespectful.

For these reasons, I attempted to suspend any judgment or critical thinking about what I saw until after the ceremony, when I had the time and space to process my feelings. What emerged were not so many judgments, but connections to ways in which other societies — including my own in the United States — encourage women’s submission to violence.

Observing the whipping ceremony in Ethiopia made me reflect on parallel practices in U.S. culture. How often do women submit to violence — either at the hands of others or from themselves, to prove that they are real, desirable women? How many women starve themselves or undergo medically unnecessary, risky, and painful plastic surgery to achieve societal standards of beauty? How many women get ripped apart by police officers, defense attorneys, and judges for wearing short skirts, getting too drunk, or walking home alone? They were asking to be raped or sexually assaulted, weren’t they? How many women tell themselves that submitting to their husband or boyfriend’s fists is a way to prove their love? That a broken jaw or a bruised face is the sacrifice they make for their marriage or relationship to survive?

But if we look deeper into these stories about ourselves and our worlds, we may find a common theme — that women are complicit in violence against themselves not because the “choice” is a real one, but because the consequences of abstaining are far too high.

It is much easier, and the rewards are greater, to submit to violence than to defy it — in Ethiopia and other societies. Continuing to define womanhood in ways that demand or support violence against women will only ensure the continuation of such practices.

If you like this article, please share it! Your clicks keep us alive!
Tags
violence against women
Ethiopia
ceremony
female genital mutilation
domestic violence
feminism

What It’s Like To Be An Abortion Doula​
Brittany L. Stalsburg

What It's Like To Be Shamed While Pregnant
Brittany L. Stalsburg

I Attended A Whipping Ceremony In Ethiopia
Brittany L. Stalsburg