I Have OCPD: Here's Why You've Probably Never Heard Of It Before 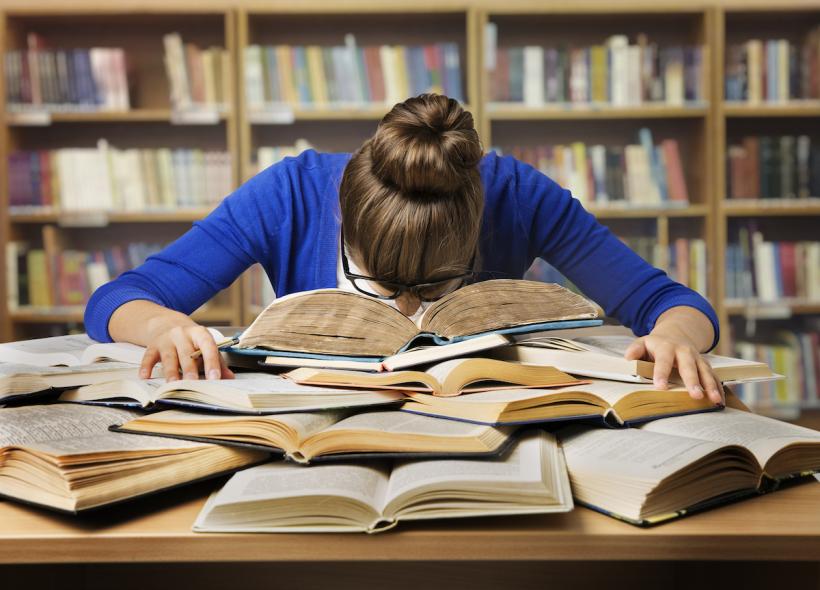 "I no longer get a sense of pride from being and proclaiming to be busy, and I don’t take part in pro-burnout culture talk with others."

I am just so busy.

For a long time, I repeated this complaint with a slight sense of pride. It’s a part of our society — we love talking about how busy and overworked we are, how we only run on coffee and very little sleep, how we’re all about having an overfull schedule.

But this ‘burn-out culture’ is harmful, and it invisibilizes people like me — people with OCPD.

Having busy days with plenty of work and errands to run seems like a very normal thing to do. It was by no means just me buckling down at university, and it was satisfying to complain about how much I had to do. “I am just so busy” was a genuine complaint, but it also contained a sense of pride and boastfulness on my part about how productive I was. Fellow students, lecturers and others, would also regale these slightly boastful and pained stories about how snowed under they were. It’s a study and work environment cultural norm.

I thought I was doing everything right, so I was surprised when my mental illness got so bad that I could no longer get out of bed, let alone study. I was burnt out and terribly depressed.

Even though I was too unwell to move, it was difficult for me to accept that I was pushing myself too much; if anything, I ought to have been doing more! And doing it better! Eventually I was diagnosed with Major Depression and Obsessive Compulsive Personality Disorder (OCPD) — not to be confused with the generally better-known Obsessive Compulsive disorder (OCD).

The MSD Manual defines OCPD as a condition where a person is “preoccupied with order, perfectionism, and control of themselves and situations interfering with flexibility, effectiveness, and openness.”

My problem wasn’t really that I overworked. In fact, I knew many people who worked longer hours and even had additional responsibilities, such as children and community engagement. The problem was rather about my inner approach to my studies and life in general. That is, an approach characterized by a tight perfectionistic grip. OCPD causes inflexibility and paralysis driven by the pursuit of perfection. It can make completing tasks difficult or sometimes impossible.

In my mind, I was putting in a decent effort to just "making it," which is what everyone else was doing and what was expected of me. This makes OCPD sneaky and hard to detect, especially in oneself.

You would be forgiven for mistaking OCPD for its relative, Obsessive-Compulsive Disorder. But unlike OCD, OCPD does not include unwanted obsessive thoughts and rituals. OCPD is a personality disorder where the focus is on order and control in one’s life and work, rather than rituals. Another major distinction is that OCPD sufferers view their symptoms as being rational and even desirable, whereas those with OCD battle with unwanted thoughts and rituals.

Not only do OCPD sufferers think of their symptoms as "correct," they can become tyrannical and resentful at times when they feel that others are not measuring up. They also find it difficult to express anger which is thought of being an inappropriate emotion, at odds with the capable image those with OCPD want to show. Anger is swapped for anxiety and frustration, which are experienced frequently or predominantly.

And as you can imagine, being grumpy in this way puts strain on relationships.

I thought that my drive to perfectionism was warranted and desirable. I am just doing what I have to do — the mantra I used to motivate myself to continue to be productive, especially when I was feeling tired and tense. After all, I was an undergraduate university student so it was my duty to do everything a student would: attend all lectures, take good notes, read to understand the work, and put in a decent amount of thought into assignments. I also was a part-time tutor and wanted my students to really grasp their work so I needed to know their work well.

But the thing with personality disorders is that they apply to every area of our life. After all, one’s personality affects everything from how you work to how you relate to others. This was definitely true for me.

I went to gym and put in a good effort to compensate for how physically lazy I thought I was. At some point, I also had to see my friends and be entertaining so that we could all have a good time and that I could be a well-rounded person. I cleaned my room and planned my meals, but I never could do it well or often enough to have my room as clean and my meals as healthy and tasty as I would’ve liked. In my mind, I was putting in a decent effort to just "making it," which is what everyone else was doing and what was expected of me. This makes OCPD sneaky and hard to detect, especially in oneself.

Almost all the people I have told about my OCPD can relate to some, if not all, of my symptoms. So why is it that OCPD is seldom discussed, even in mental health communities?  Psychologist Ellen Hendriksen writes that OCPD is the most common personality disorder, with 3 – 8 % of the population affected.

Yet it gets overlooked as it is not a dramatic disorder. One of the reasons is because of the nature of the disorder itself. OCPD behavior is difficult to detect in oneself as the symptoms feel so justified and "right." It tends to take a suffering relationship (or as in my case, a breakdown) that causes the sufferer to seek help and get diagnosed. It also doesn’t help with OCPD awareness that OCPD is easily confused with OCD.

We don’t recognize or discuss OCPD enough because the disorder is in line with our collective values regarding work and excellence. When dealing with OCPD, and even other disorders, we need to remember that behaving in even admirable ways can still be disordered. Doing what is expected is not necessarily healthy.

A big reason why OCPD is overlooked is because many of its notable symptoms are encouraged in our society. From elementary school on, we are told to do our best and to work hard to secure our futures, lest we become hedonistically idle and unemployed. With so much emphasis on work and productivity in society, OCPD’s symptoms of over-conscientiousness and over-working are not out of place. OCPD sufferers are often admired for overworking themselves, which reinforces their harmful perfectionism.

According to the American Psychiatric Association, one of the criteria for being diagnosed with a personality disorder is having symptoms which “deviate markedly from the expectations of the individual's culture from the social norm.” The other criterion for having a personality disorder is a marked disruption in several key areas of the person’s life. As OCPD symptoms fit in well with society’s norms, the first diagnostic criteria is not easily met, ultimately casting OCPD as an invisible illness until it’s created a lot of upheaval in the sufferer’s life and ability to function.

We don’t recognize or discuss OCPD enough because the disorder is in line with our collective values regarding work and excellence. When dealing with OCPD, and even other disorders, we need to remember that behaving in even admirable ways can still be disordered. Doing what is expected is not necessarily healthy.

I had a lot going for me and wondered from to time as to why I was so unhappy — and a lot of people do. Examining our approach to work, rather than just on how much work we do, is something that most of us can benefit from given the weight of expectations we all face.

A good place to start examining our approach is when we are boast-complaining to each other about how busy we are. Are we generally thrilled and engaged by all that we have to do, or is it all actually just a little bit too much?

My OCPD is definitely still part of me, but I have learned how to manage it. I no longer get a sense of pride from being and proclaiming to be busy, and I don’t take part in pro-burnout culture talk with others. I have had to be taught from my psychologist (who I am super grateful for) and friends to relax and focus a little more on my needs and experiences, rather than how much work I can do. When I am stressed or anxious my desire for control flare up a bit and I am usually able to spot it and slow down instead of speed up my activities.

Getting good grades is nice but enjoying the flow, richness and surprises life brings — that is better still.

I Have OCPD: Here's Why You've Probably Never Heard Of It Before
Nadia Schmidtke