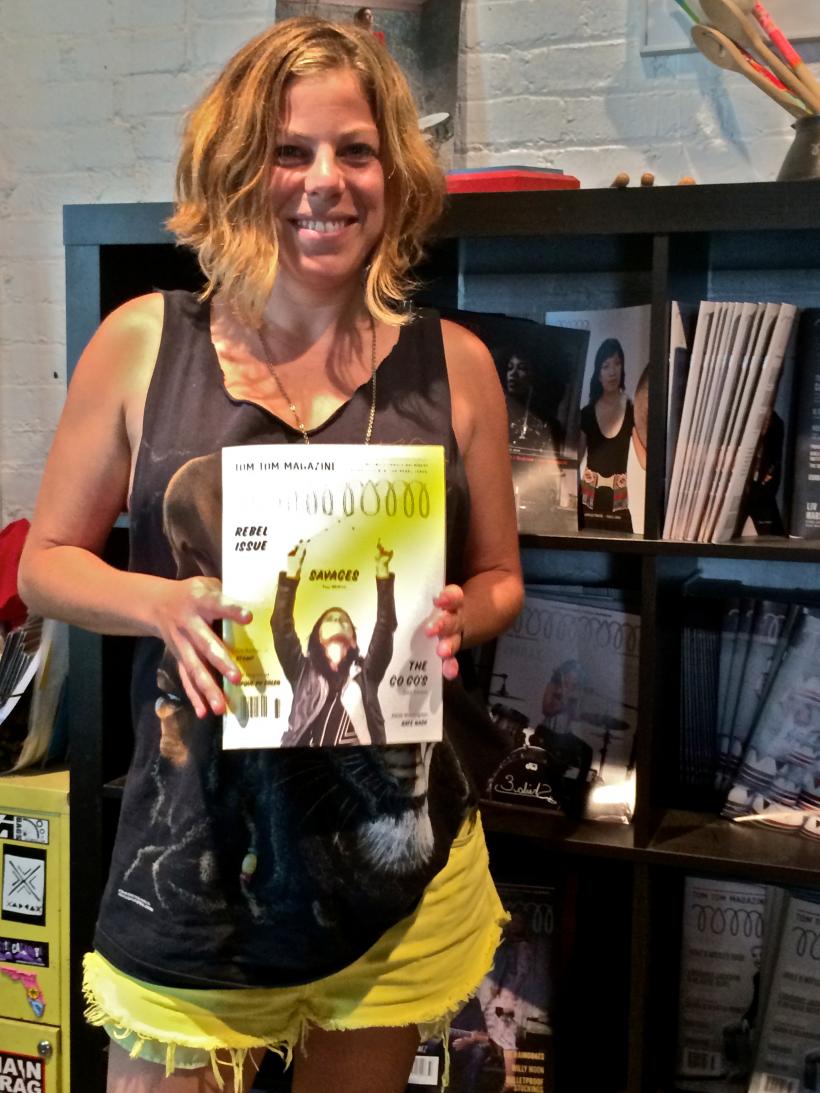 Mindy Abovitz is the sort of woman where you wonder, "does she ever sleep?" Founder of Tom Tom magazine—a drippingly juicy, full-color quarterly magazine dedicated entirely to female drummers—Abovitz has built a niche empire, a gleaming castle caught in the cross-hairs of feminism, media and music.

First launched in 2009, Abovitz built Tom Tom as a means to meet other female musicians and serve as a countering force to what she perceived as a shocking dearth of female drummer representation. "I set out to change the Google search results for 'female drummer.' If you typed in any of those things you'd get results saying things like, "can girls play the drums "really?" "Are girls allowed to drum?" There were all these insecurity-based questions."

Saying her efforts have "worked" would be an understatement. Since beginning a fledgling Wordpress site in which she first interviewed herself (more on that in a minute) Tom Tom has evolved into a juggernaut of media; it's not only a print magazine, a website, and a social media community, but Tom Tom also hosts feminist panels at colleges throughout the country, throws events that promote female musicians (including Hit Like a Girl) and even serves as a consultant to companies looking to better represent women in advertising.

She boasts more than 250,000 readers across all of Tom Tom's mediums—both men and women—hailing from the U.S., Europe, South America, Japan and Australia and runs the show with a staff of four. (In addition to a killer squad of freelance photographers, artists, designers and writers.)

On a blistering New York City summer day, we climbed the three-floor walk-up to Tom Tom's warehouse-cum-loft-cum office in Bushwick, Brooklyn. There we found Abovitz, her brilliant brain and a shit-load of inspiration.

So give me the lowdown. How did this all start?

I was born in Ohio, grew up in Florida and moved to Bushwick about 12 years ago. My whole intention was to meet other ladies that played music and I couldn't find any! I started throwing shows in my house and I started to be in a band with myself—More Teeth—I fell over my bike and busted my front teeth. I was fascinated with teeth for a while.

After a little while I started Taihgaa, which is defunct now. I was working at Main Drag Music, East Village Radio, I taught at Rock Camp for girls. When hot and cold air come together there's this storm; the hot air was this radical feminist music volunteer work and the cold air was where I was getting my paychecks in the music world, working sound for films and shows. Things colliding made me want to create a for profit media monster where women were viewed as valid consumers and a profitable market that would be taken seriously for the first time.

What was the very first step once the storm started?

A poorly drawn logo. And a Wordpress which is ironically the backend of our existing website for Tom Tom.  My first interview was with myself. Tom Tom magazine interviews Mindy Abovitz. I wrote down a bunch of questions, waited three of four days and then acted like I had never seen or sent them. [laughs.]

Being in Brooklyn, being in this scene helped a lot. I was able to speak to and write about friends that other people cared about too: Frankie Rose and the Outs, the Vivian Girls, Kim of Matt and Kim, Light Asylum; I was after them at Day 1. But I've boot-strapped the whole thing—it's been a torturous experience. It's been so hard. I would give myself an MBA right now.

What's your relationship to feminism?

First and foremost—I'm defined as a feminist from other people. But I also 100% happily accept that label and call myself a raging feminist. But I'm also a social change activist. My priority is women and girls gaining confidence to do whatever they want; right now my focus is drumming. I'm feminist in that I'm pushing a female agenda.

I want to push how people are seen in the media—age, race, ability levels, class, notoriety. We're all humans. But those that make into mass media tend to be a certain kind of human. So I'm after Vogue, I'm after Elle, Urban Outfitters . . . eventually I will make my way to their ears and get them to feature real women in their advertising, to recognize the general public instead of the 1% that they show and quit inserting insecurities into 99% of women.

It's like, fuck you for all of the times that we were never advertised to. How many skateboards and drum sets and backpack ads did I never see myself in? They could have shown me that I wasn't a freak for playing the drums.

Why drums? And what is it about women and drums that have so resonated with people?

I'm a drummer . . . though I didn't start until I was 21. My best friend bought my first drum set. I think through exploring women and drums we've learned that we're the smallest statistic of women—we're the minority within the minority and that's fascinating. And personally, I like drummers' personality better than anyone else's because they have built in humility. They're never expecting any glamor; it's an unsung hero role. You simply support your band.

Drum lessons can transform a girl's life in a matter of five lessons; in terms of feminism and confidence it's number one on my list.

As for the magazine itself, I mean, people have thought forever that female drummers are hot and that's worked to our advantage. [laughs.] I feel really lucky because things got muted and wet-toweled for a while. But I think drummers feel like potential leaders and people want to get behind it. There's humility in it and a lot of discipline.

And honestly, in the end, Tom Tom is really a drum magazine with a focus on women. The rest is technique and gear and is rather gender-neutral.

What's been the biggest challenge you've come up against?

Money. But then I realized that not having any money was the best thing in the world because everything was naturally building upon itself. I used to dream about investors and stuff and didn't know how to get it—now that I know more I don't want them. I'd rather just sell more ads or do an event—I try to sell ads every day. Figuring that out was a major learning curve. Right now my goal is to increase the number of female girl drummers by 50% and I need the staying power in order to do that. So I think about sustainability all the time. How to maintain energy, sustain staff and the project. How do I grow it? How do I affect the subconscious of the United States? My brain has to stay sharp—exercise and sleep and brain food.

When the common cry is 'Print is Dead!' why did you decide to pursue print?

I believed it was the only way the drummers would get the respect they need; print costs a lot of money. That's recognized—if you make a beautiful print magazine and distribute it as widely as possible who can deny that? Respect is the one thing I keep coming back to. Most of the time my eyeballs want to fall out looking at the computer. In 2009 I knew that was only going to grow more and the hurdle I often have is marketing directors saying they don't believe in print but at the same time, 75% of them want to make a serious change and I can help them do that. I have to prove myself and really want this to work. Right now for example, I'm finding a female drummer for a Fox TV series. I'm like the only person who has access.

I've been doing some research into meditation. I want to be able to clear the proverbial slate again. I'll be on the verge of an epiphany but will be bogged down by a deadline or some lingering thought. I [clean the slate] when I sleep, but I'd like to do that during the day too.

What would you be doing if you weren't heading up a music magazine?

Drumming, on tour. Actually, I'm having band practice with someone tonight to see if we can be in a band together. For about two and half, three years I kind of went underground, I was just surviving with the magazine. In the last year or so I've crawled out and have had a social life and will start playing drums again. But now I'm like, where'd everyone go?!

What are you listening to right now?

Kraut rock and prog rock—that's my favorite in general. I also listens to an inordinate amount of whatever we're working on in the issue. Indie rock. Industrial house. Punk and hip-hop.

What are you reading right now?

[laughs.] Of course I'm reading Lean In. And I read The New Yorker like its going out of print. Also Fast Company and Ink. I just finished Wild by Cheryl Strayed and Women Drummers by Angela Smith.

What's next on Tom Tom's horizon?

I want to start a marketing firm to help people reach women, girls, blacks, Hispanics, people with disabilities—all the people that are left out—and reach them through advertising. We've developed all these relationships with marketing directors—we're not just running a magazine, we're talking to a niche that no one has ever spoken to before. We can help companies regularly find women to endorse. It's ethical and moral and you can make money while doing so!