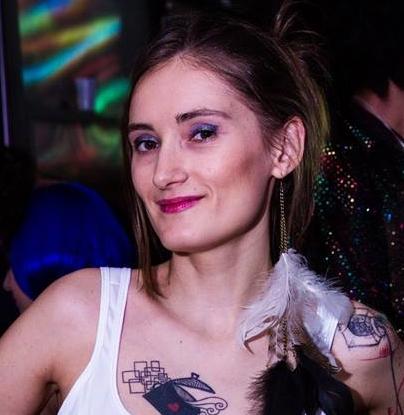 Millennials have been accused of everything from laziness to general ineptitude. Most jarringly, this generation has been accused of propagating “hook-up culture.” Research has disproved this, but questions still linger. Most importantly: why would anyone care? In a culture plagued by economic injustice and violence, why are the sexual appetites of young adults so intriguing?

We sought out Dr. Zhana Vrangalova to illuminate a fresh perspective on promiscuity. In addition to her academic work on casual sex, promiscuity and nonmonogamy, Dr. Zhana is currently conducting a public project to learn more about, well, hooking up. The Casual Sex Project asks participants to submit tales of their experiences with sexual encounters of the non-committed variety.

For the love of anti-slut shaming and femininity in general, we just had to chat with Dr. Zhana!

You have a PhD in Developmental Psychology from Cornell. What attracted you to study sexuality? When did this interest begin?

I’ve always been fascinated by this subject—especially about things like the double sexual standard and sexual orientation. I did my BA in psychology in Macedonia and during that time I also did a couple of research projects about sexuality. I got involved in gay rights groups—completely taboo in Macedonia at the time—and also did some research on stigma. My honors thesis was on lesbian and gay development. So, I was already doing sex related research. When I finished my degree, I had to decide where to do my PhD. I specifically sought universities with sexuality programs. Cornell offered a great program. I started in 2006. I had traveled around Europe and the US before moving here, so it wasn’t a complete culture shock. And there was nothing comparable back home to the intellectual atmosphere of Cornell.

I've always been the kind of person who likes to question social norms, challenge the moral status quo and fight against blind conformity, both in my personal and my professional life. So, my interest in studying casual sex and promiscuity is a natural extension of my desire to ask questions that most shy away from, to push people to think outside of the little boxes they've been socialized into, even if that might be a bit uncomfortable.

Initially when I came to Cornell, I applied to work with a professor on bisexuality–I was interested in the gray area: not completely gay or straight. He said, “I know you want to study this, but why don’t you read more broadly for your first year?” He gave me freedom to read more and explore questions that were unanswered.

So I developed this other line of research: I started becoming interested in the topic of casual sex and mental health. It’s a big part of many people’s lives, yet at the time, there were few papers on the topic, and to me, they seemed black and white. I wanted to bring in a more complex perspective. This can’t be “good” or “bad” for everyone—there have to be other factors. An individual's personality as well as social, environmental and partner needs should be considered.

You quote a study about “hook ups” and emphasize that most participants were not in college. Why do you feel that distinction is important?

Only 40% of the US population goes to college and college is a unique environment, especially in the US. In other countries, colleges are more integrated with their geographic surroundings, but in the US, colleges create their own set of rules and regulations. There are class and race issues that get glossed over in homogenous college populations. I’m interested in people who live outside that bubble, too.

When you began “The Casual Sex Project,” what were you expecting? How has this changed? Why?

When I started it, I didn’t know what to expect. I was hoping that it would be useful, that there would be people who are interested in sharing and reading each others stories. We can learn from each other. We know, from prior research, that writing about an experience helps you understand it. And reading other's stories can contribute to awareness. What did an experience look and feel like? I wanted to dispel the black and white, good or bad myth that surrounds casual sex.

When it started, the first month or so, it was just a story or two a day. When the media picked it up, the amount of stories increased significantly. It really is about connecting with people. There was no other forum out there of this kind and I’m really glad it’s opened up a conversation. Seeing the huge media interest that it generated is great—we’re all talking about it a lot more now. Casual sex should be talked about. Up to 80% of college students will have a casual sex experience. Around 50% of people (not necessarily in college) will engage in a casual sex encounter so this work is relevant to the lives of many people.

Do you feel that your gender impacts your perception when researching these topics?

Sure, I don’t think it’s possible not to be affected by one’s own personal characteristics. Especially gender. There’s no doubt that women are judged more for being more sexual. There are more issues that they have to deal with. Being a woman, I see this happening. I try to stay neutral, but I’m sure people will make assumptions. Things would be different if I were a man. I like it though, it allows more room for me to challenge assumptions. It may be a harder fight, but it’s also more rewarding.

How has sexuality changed in the past few decades?

Thirty years ago the predominant framework for acceptable sexuality was “sex is for marriage.” Today it is “sex is for a serious relationship.” Slowly, however, attitudes are changing to accompany a variety of sexual behaviors. I think we’re coming to a point where we’re learning that there is no “right” and “wrong” that works for everyone. There are all sorts of different views of sexuality and these days, more people are trying on different things. Young people are still dating and still having long term relationships and they're also experimenting with different forms of sexuality.

If you like this article, please share it! Your clicks keep us alive!
Tags
casual sex
promiscuity
sexuality
Sex
Love
cheating
sexual partners

Am I Afraid To Be Alone?: Why I Took A Month Off Dating
Giana Ciapponi