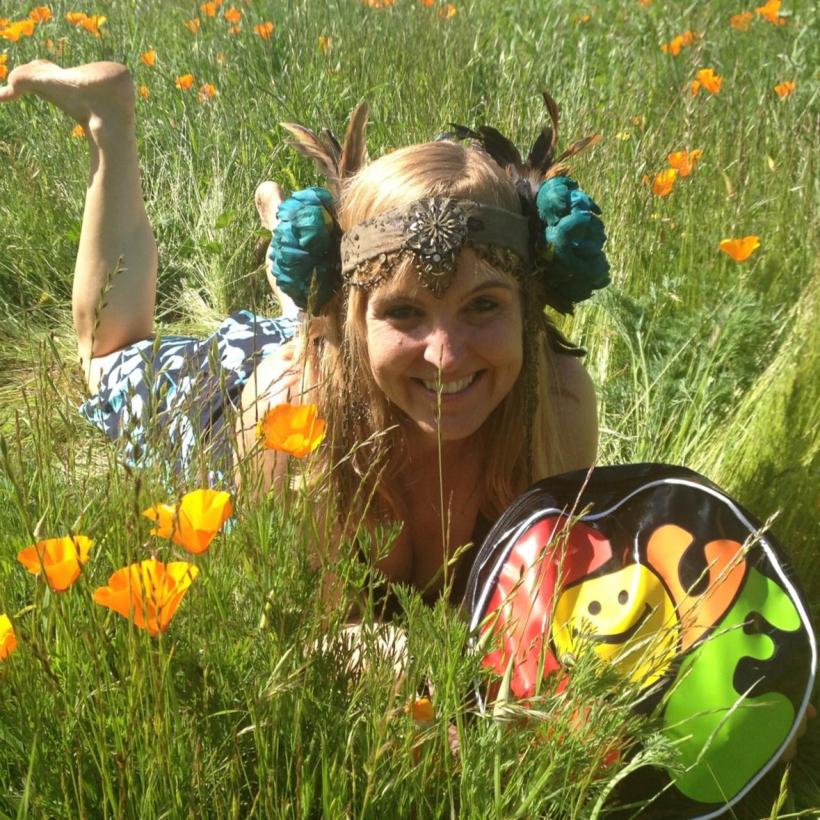 I met Kim Corbin at an Ocean Beach party in San Francisco on a sunny June afternoon. The event: Silent Frisco, an electronic dance music gathering where participants wear headphones so the music isn’t audible to the outside world. The crowd: EDM lovers, beach goers and Burning Man attendees alike.

I spotted Corbin skipping across the beach toward the water and felt compelled to talk to her about what she was doing. Little did I know, skipping was an integral part of “Skipper’s” life. On the surface, skipping may seem like child’s play—remember learning how to skip in kindergarten?—but for Corbin, it’s a style of movement that she’s built her life around. While that may sound silly, there are benefits to skipping. For starters, it’s good exercise and easy on your joints. On a deeper level it’s a joy-based activity that lifts your spirit and the spirit of those around you. Have you ever seen a sad person skip? I don’t think so.

Corbin's site iSkip just celebrated its 15th anniversary and her dedication to all things skipping has yet to wane. I recently caught up with the skipping advocate to learn more about her skipping mission. And yes, the other day I chose skipping over running and was instantly gratified. Give it a try and see what the hype is about.

You’ve been skipping for over a decade and your site, "Home of the Worldwide Skipping Movement" recently celebrated a major anniversary. How did it all start?

One day in 1997, I was in the Castro district in San Francisco and my friend said, “let’s skip.” And so I did. And as soon as I skipped this joy filled my body and I thought, “Oh my gosh, I can totally get my Burning Man friends into this!” I had just come back from my first Burning Man, and having worked on the media team, I instantly thought about getting the team and all of my Burner friends to skip with me . . . and then do publicity around it . . . and make people think it’s cool . . . and then everyone would start skipping! With just one skip, I had this whole vision.

At the time, however, I just wasn’t ready to complete the vision. I was in “party girl” mode and not ready to focus on much of anything except having a good time. It took two years before I found my calling. Like Joseph Campbell's Hero’s Journey, sometimes it takes a couple of times—in this case years—to answer the call.

When I finally answered that call, in 1999, it was right when the whole dot com world was getting going. It was like the gold rush. At the time, everyone was trying to figure out how to make money on the web. For me it wasn’t about making money, it was about having an opportunity to share my Burning Man experience and a positive message with the world. Skipping is free, so I put myself out there!

In the beginning, I was picked up all over the place: The Wall Street Journal, Newsweek, CNN. There was no Facebook to spread the word, so I recruited “Head Skippers” to be spokespersons in their hometowns. We started doing multi-city skipping days. In San Francisco, dozens of people would get together twice a month and skip! It was very, very exciting.

Would you describe skipping as a movement? What’s the most important thing about it to you?

It really is a movement. Spreading the positive energy and cheer and seeing how far I can take this is what’s important. It’s a journey. It’s my Hero’s Journey of being called to do something. It’s taken me to some really exhilarating places and some really challenging places. All the while, I’ve known that I’ve found this unique contribution that I can make in this lifetime. I love how my own story proves that you can be called to do anything in life. I was called to skip! It’s very unusual . . .

Skipping is quite non-conventional. How is it received on the street day to day?

It is generally received extremely well. We have this apprehension that we can’t just skip down the street. I still have that in my head after 15 years, depending on where I am. If it’s just me somewhere, it’s not a big deal. If it’s a public place, it raises concerns about looking like an idiot or people judging you. At the same time, that’s what I love about it. It helps strengthen a part of your mind. Like, “I love my spirit and I can do this!” I want my internal mindset to be the same if I’m at Burning Man or in the real world. The more I do it, the more it has translated into other areas of my life. I’m achieving an overall integration of that freedom that I first found in Burning Man in 1997.

You talk about recruiting other skippers, which means you’re not the only one doing this out there. Even recently, skipping was written up in the New York Times, so it’s still happening! Who are your fellow skippers?

When I was doing this full time I lead the “Head Skipper” program. There was no social media or anything so it was old school. It took a lot of time! Susan Reineck skipped 100 miles in Atlanta to raise awareness for a wildlife sanctuary where she worked. There was Ashrita Furman, a guy in New York who is still skipping, who set the Guinness world record for skipping the fastest 5K and also skipping a marathon. Now, there’s Michelle Joni in New York City who has an amazing skipping club. There are generations of skippers! Michelle is 15 years younger than me, and I recently found a video of a male skipper that went viral on YouTube from the 1980’s.

What has been the biggest challenge in this endeavor?

When I was caught up in all of the initial excitement and publicity, I naively left my job thinking that the financial net would follow. Instead, I went into financial ruin. My dad would always say, “How is the cash register going to ring, Kim?” and I would answer, “It’s my calling!” I was very naive then; well-intentioned, but naive to think that that was the way the world really works.

If there’s one thing I would do over again, I would have kept my day job longer and just appreciated skipping for what it is, which is spontaneous and free. If you try to put too many boundaries or structures around it, it loses the magic. I have finally come to a place where I have a day job that I absolutely love and feeds me, so that skipping gets to be what it is. I am glad about that now.

It seems like you’re in a really good place now. Did your name, Skipper, come before or after you set out on this journey?

Well, it’s not my actual name. I was deemed Skipper on the Playa after iSkip was created and am known by the Burning Man world as such. Kim is also kind of a boring name.

You’ve been to Burning Man 15 times! Is skipping intrinsic to that culture?

Totally. When I first had the idea, some of my friends in my hometown of Indiana, couldn’t understand what I was even talking about. On the other hand, my family and my Burning Man friends thought starting a skipping movement was a great idea. Skipping captures the energy and spirit of Burning Man. Out in the regular world it brings a piece of the playa home.

People who have been to Burning Man know what the vibe is like there, but it’s really easy to only have that vibe exist at the event itself. I don’t want to do that. I don’t mind any judgments that come from outside the culture. I decided early on not to let anyone dictate how I look at the world because they don't understand what's possible when we live in a collaborative, non-judgmental, open-hearted way.

So, are you headed back to Burning Man this year to spread your good cheer or are you going to skip it? (Zing!)

It’s funny. I don't really bring skipping to the playa. Skipping happens so naturally there! It’s become such a big part of my life in the regular world that I don’t want to worry about it too much when I’m there. I’m not going to make it this year, so yes, I’m skipping it!

Do you have any favorite skipping memories?

Definitely skipping with Donny Osmond from the Donny and Marie Show. Another was in New York City in 2000. I was there for the Million Marijuana March. I was dressed in a bunny suit and made a sign that said “Skipping is a Natural High.” A friend of mine picked me up on her motorcycle, but a cop pulled us over for not having a helmet on. Here I am promoting an alternative to marijuana use and the cop has the nerve to pull me over! I was an irate bunny. As the cop is writing a ticket, all of the people in the parade start yelling, “Let the bunny go! Let the bunny go!” That’s one of my favorites.

So, what’s next for skipping?

I feel like I’ve only just begun! There’s a documentary in the works called Skipping Joy about the benefits of skipping. Michelle Joni and I are both in there! It’s not really about us, but about skipping as a whole, which is very exciting.

I’m also writing a book, called Skipping the Life Fantastic. I started 15 years ago, so I have been writing the book for some time, but I’ve learned so much! I put it away for awhile, but now I am fully enjoying writing instead of being so frustrated. I’ve come back with fresh eye and a fresh spirit and am enjoying it again.

If you like this article, please share it! Your clicks keep us alive!
Tags
Burning Man
skipping
skipper
peace
Love
Joseph Campbell