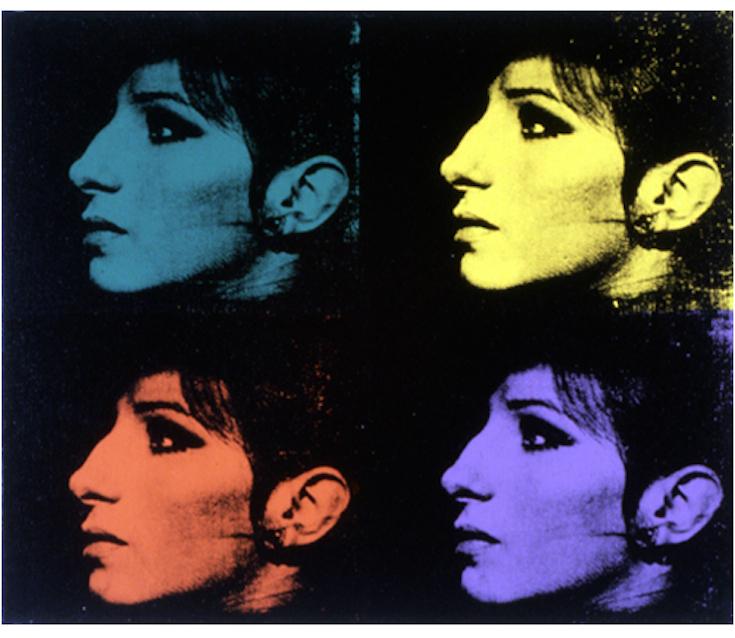 Deborah Kass is one of the most important female artists today. Her incredible talent has been widely recognized and her work has been shown at some of the most preeminent museums and galleries in the world (including the Whitney Museum, the Brooklyn Museum, the Jewish Museum of New York, the Museum of Modern Art, the Guggenheim Museum, the Warhol Museum, and the Smithsonian, in addition to pages of others places). In fact, Kass hasn’t stopped working since she was fired from her last day job — waiting tables in 1981.

But Kass is so much more than the sum of her work or her talent. A warrior for women, she uses art to express her point of view — whether it’s about female empowerment, Judaism, or finding the humor in difficult times. Her series of Barbra Streisand portraits called “The Jewish Jackies” is just one example of this.

Kass is also inspired by her wildly talented wife, artist Patricia Cronin, who is perhaps best known for her three ton marble sculpture of herself and Kass, Memorial to a Marriage.

I recently had the privilege of sitting down with Kass to discuss the origins of her career (spoiler alert: it involves crayons), her struggles as a female in the art world, Barbra Streisand as a feminist icon, and her very practical advice to aspiring artists.

Why and how did you decide to become an artist?

I wanted to be an artist since before I can remember. My parents sent me to nursery school before I could talk. One of my most vivid memories was stealing the big crayons they had there, my first act of artistic appropriation. Another memory is "decorating" the walls of the house, drawing all over the wallpaper, for which I was punished. I think you actually don't "want to be" an artist. You are born one. There is no reason in the world I would even know what art even meant, since no one in my family was a visual artist or had any interest in it or why I had to have those big fat crayons.

So no clue where I got the idea, other than being born that way.

Why do you refer to Barbra Streisand as “The Jewish Jackie?” Other than her talent, why do you think she resonates with so many people?

Streisand's public rise matched the Kennedys', the early '60s. Jackie was a revolutionary first lady, very young (early 30s) gorgeous, elegant, and oh-so-chic. Barbra was another kind of glamorous, another kind of radical. Barbra was simply the first star who looked anything like the people I knew, every one a Jewish New Yorker, first or second generation, ambivalent about most of those things that marked them as Jewish: their looks, their accents. They had lived through WWII, and many of their immediate and extended families in the old country did not. They were understandably scared/ambivalent/reticent about claiming their ethnicity outside of the communities where they felt safe. Barbra was a new generation of assimilating Jew: proud, unapologetic and the first famous woman with whom I could actively identify. She wouldn't change her name or her nose, previously the first things you would lose as a Jewish woman in showbiz. She knew the power of difference before "difference" became a theoretical category. And she reveled in it, she celebrated it. That is why she resonated with so many who felt "different." I can't tell you how completely radical and liberating Barbara Streisand's self love and confidence (which stood in stark contrast to almost every other female star Jewish or not) was for this Jewish girl from Long Island in the '60s with artistic and public aspirations. And obviously for many others.

Has being a woman been a positive or negative for your career?

Best thing in the world for my work. Worst thing for my career.

Have you experienced discrimination in the art world?

Do you think the humor in your work, such as the “Feel Good Paintings For Bad Times” series can make a stronger statement than something darker or more serious?

We all know humor is a survival tool. It's my heritage, can't get away from it, nor would I want to. That said, the next show is shaping up to be pretty damn dark.

How does your wife Patricia Cronin inspire you?

No question — living with an artist with the intelligence and integrity of Patricia Cronin has made me a better artist. To say we "keep it real" is an understatement. We share the same values. Since those values are somewhat resistant and oppositional to prevailing cultural norms, we really support each other. It's almost like having another set of legs to stand on, very grounding. We are each others’ biggest fans.

Very few artists truly “make it” and show their work regularly. How does it feel to be so accomplished?

"Accomplished" is a relative term. I will say though that I can't believe I got to this age without having a day job since I got fired from my waitress gig at Broome Street Bar in 1981. That said, there are many more mountains to climb, many more walls to break through or find a way around, and way too many more ceilings to crack. And I am as impatient as I have always been.

Do you have any advice for aspiring artists?

Move to a city other than NYC; find your community and support each other. Lose those negative friends who are not supportive of your work. Always go towards the warmth. Don't underestimate anyone, especially the nerd next to you in art school or out. They will end up being the star and will never forgive you for being a dick. So just don't be one. Ever.

What is your next project?

A show at the Lower East Side gallery Sargeant's Daughters in May of a series from 1998 that was never shown in NYC, "America's Most Wanteds." Then a show of new paintings at Paul Kasmin Gallery in December: "Black and Blue" and "Inherent Vice."