Living Together, Separately: On Not Sharing A Room With Your Partner 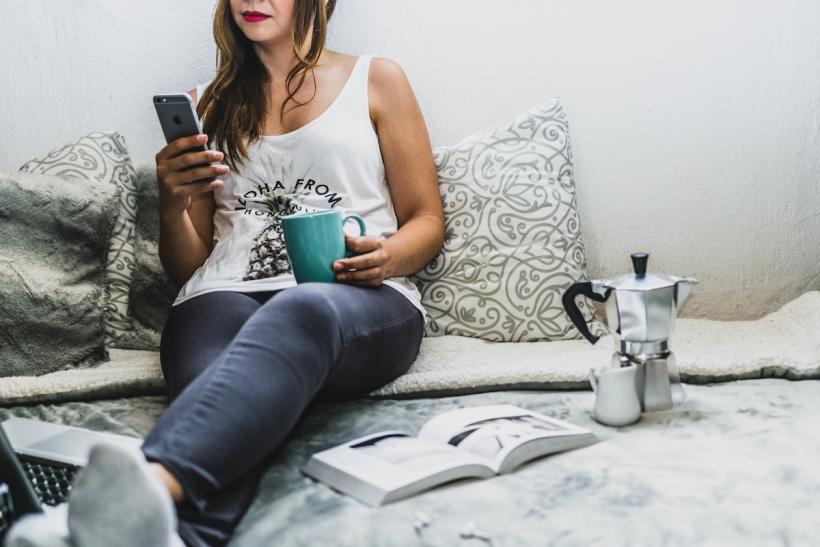 Photo by BRUNO CERVERA on Unsplash

My friends used to laugh when I’d talk about my idea of the “perfect relationship.” It involved living next door to my husband — each of us with our own space, and our independence, yet near enough to be together often.

So much has been written about polygamy, polyamory, and open relationships. Parties in either camp stand staunchly to their guns, advocating that one or the other is the Promised Land in terms of the joy and happiness that one can find if only they take it up as an alternative to monogamy.

I choose to ask the question: What if we’re simply doing monogamy wrong?

Having lived with several boyfriends in the past and garnered a wealth of knowledge in what living together does to a relationship, both positively and negatively, I set out to attempt an experiment in my current relationship — with my boyfriend game for the challenge. We would attempt to define everything about cohabitating in a relationship on our terms.

We went apartment shopping, specifically seeking a two-bedroom, two-bathroom apartment. While the second bedroom would allow guests to stay over, its main purpose would be as a bedroom for one of us. The bathrooms would also be permanently his and hers — one of us adapting when guests came over.

He and I have very different levels of cleanliness, so it was decided that I would live in the second bedroom and bathroom, furnishing and decorating it in my style. As I’m something of a neat freak, this also ensured that it would be ready at a moment’s notice for any guests that might stop by.

He, on the other hand, gets the master and is free to mess it up to his heart’s content. Jeans still bunched up on the floor where he stepped out of them, the bed rumpled and unmade, the remote still missing from two weeks ago, and his towel — damp, of course — tossed onto the bed.

This would have driven me crazy in previous relationships. In fact, it did. Now, I stand at the doorway to his room peering in, grinning at the mad-genius-style chaos and say, “I have to pick up a few things at the store…would you like me to get a new remote?”

In the bathrooms, our things don’t compete for counter or drawer space, and in the mornings, our routines can be as intertwined or separate as we wish. We often shower together, but he’ll trim his beard listening to morning talk radio, while I prefer music in the morning while I straighten my hair. Sometimes we’ll use his bathroom, sometimes mine. While we call them “his” and “mine” they are not off limits to the other person. Our one rule is simple: Be respectful of the other person’s space as it is.

This means that while I might make a tongue-in-cheek joke about the missing remote, I refrain from pestering him about the mess, hanging up the damp towel, or folding his jeans over the back of a chair. These things come automatically to me, so in the beginning I had to concentrate on notdoing them. I use it as practice in accepting him for who he is, and I constantly marvel that he accepts and adapts to me as well.

When he runs out of contact lens solution and needs to borrow mine, he knows to return it — and not just to the counter, but to the bottom drawer where it lives in my bathroom. Not because I “make him” but respecting my space means putting something he used back where it goes even though that doesn’t come naturally to him.

Related: Why Are We So Obsessed With Monogamy?

When friends learn about our living situation they’re naturally brimming with questions and opinions.

“But what about intimacy?”

“Whose bed do you sleep in?”

“I could never sleep without my husband next to me!”

“Well that works since you guys don’t have kids!”

We’re both happy to discuss the details of our relationship — to a certain extent, of course. Some things are best left private. But most often we encourage and enjoy having intelligent dialogue on the situation. And our happiness and general good cheer have gone a long way toward dispelling the initial reactions (spoken or unspoken) of, “they must be breaking up” or “they must not love each other like we love each other.” Over time, the novelty has worn off and our friends have accepted the way we live and function. It’s still fun when they introduce us to new acquaintances: “This is the couple I was telling you about…” and we never fail to get a slew of predictable questions.

Where Do You Sleep?

Wherever we feel like it. I don’t watch much TV so I don’t have one in my room but he does. He likes to fall asleep watching TV while I hate it and rarely can unless extremely tired. Therefore I’ll often end up in my room and he ends up in his once we say our goodnights. I’ve found that even though I think of myself as a “cuddler,” I get really uncomfortable after five to 10 minutes. My arm falls asleep or my boob is crushed up against my arm awkwardly and I just want to stretch out. He falls asleep in five minutes so then there’s the slow, tense, easing out of the embrace and then to my side of the bed. I also flail around during the night a lot while he falls asleep on his back, wakes up once per night to go to the bathroom, and then face plants on his stomach. I often sleep poorly in the same bed because I worry that my tossing and turning bothers him.

Separate rooms have solved this for us. We often move in and out of them during the night. I might wake up at 5am and go into his room for an hour or two of dozing before the alarm blasts us awake. I typically sleep much sounder at this time than when trying to fall asleep initially. He might stumble into my room and face plant after his middle of the night trip to the restroom. Oddly, perhaps even subconsciously, the face plant into my bed must be gentler than the one into his own, because he rarely wakes me. For two people with separate beds, we spend a lot of time in bed together. It’s very freeing in a way. Knowing that we aren’t obligated to spend every night in bed together allows us to choose when we want to…and we often do.

Somewhere along the way in monogamy, people got the idea that you should be having most of your sex at bedtime. We disagree. In fact, 90% of the time we do not have sex as a part of the “going to bed” process. Sex is sex and sleep is sleep. A lot of times, sex at bedtime can feel transactional, “Oh dear, we haven’t had sex in a bit. I’m tired, you’re tired, but we should do it anyway because we don’t want to be ‘those people’ not getting any.” We prefer morning sex, shower sex, afternoon sex, dinner is in the oven and we’ve got 20 minutes sex. Anything and everything but the “yawning, can barely keep our eyes open, doing-it-just-to-do-it sex.”

Plus, with two separate bedrooms there are plenty of opportunities for spicing things up. (Sometimes there’s quite a thrill in seeing just how messy we can make my otherwise tidy bedroom.)

I will say this: You’ll never ever get ahead by thinking that you can mitigate risk and hurt by simply being around your partner all the time and therefore always watching what they do. That’s a recipe for disaster. If your partner wants to sneak around, to lie, to cheat, they will find a way to do so no matter what. We give each other space and we give each other independence and trust.

What about the common spaces?

We have a living room, kitchen, loft space, and balcony that are common areas for both of us. In these areas we mish-mashedly combine our worlds into one. He doesn’t care much about decorating so I picked out a few pieces of art — and hung two of his that he’s had for years but always left on the floor, propped up against the wall. We shopped for the furniture together. A large comfy sofa was important to me for my Saturday afternoon naps, a large comfy recliner for him and his ESPN, a couple of small IKEA end tables — each by our respective lounge areas to rest my wine glass and his beer cans.

We live comfortably in these spaces with a decent amount of mess. I love tipsily heading off to bed, leaving my wine glass where it is, knowing that I don’t have to clean it up at that very moment and he’ll never notice. He loves that if I do put my wine glass in the kitchen I’ll swoop a few of his beer cans on my way — and I’m not doing it to judge, but simply because that’s automatic for me.

We tend to let things pile up in the common areas and jointly clean once a week. For me, a week’s worth of mess is about all I can tolerate. Meanwhile, he appreciates my conceding to the mess and is more than willing to spend a quick hour helping me straighten and tidy up. It works for us. The overarching feeling is one of comfort and togetherness.

I asked him about our balance once and he said it was “real.” He said he never feels harped on to clean up or be different, and because of that he’ll find himself wanting to offer me that same opportunity to be myself. Unlike past relationships where he felt he had to be someone else, I accept him for who he is. That makes him want to accept me as I am and find greater ways to show his appreciation and acceptance. (Like the time he scrubbed and cleaned his entire bedroom and bathroom and treated me to a surprise romantic evening in his “suite”…complete with bubble bath, wine, candles, a picnic dinner, and breakfast in bed the following morning.)

Truth be told, I couldn’t help anyone else determine if this type of independent yet interdependent relationship would be right for them. We are simply doing what works for us and what feels right for us. We decided to question the “rules” of monogamy, like “Who says we have to sleep in the same room?” or “Who says we have to do this because it’s ‘always been done’?” and instead created our own rules. I would never ask you to live by these. Instead I would ask you to come up with your own. You chose your partner. Now choose to bravely create your own rules of life together.

If you like this article, please share it! Your clicks keep us alive!
Tags
Relationships
cohabitating
living arrangements
monogamy
separate bedrooms
separate beds

Living Together, Separately: On Not Sharing A Room With Your Partner
April Thomas