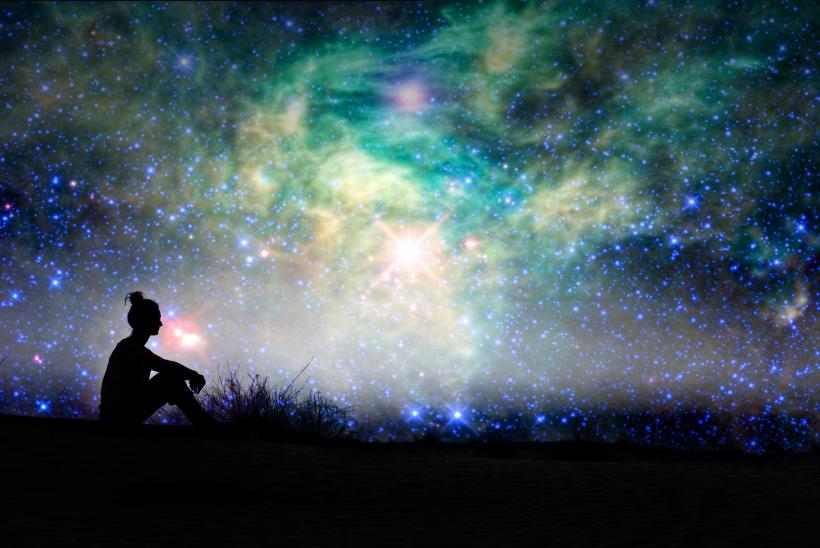 Astrology helps me make sense of the parts of life that science has no answers for.

Growing up, I was taught to believe that astrology was evil.

Well, not at home. I was mostly taught that at church. I lived in the sort of Mormon household that was cocooned in Orthodoxy but still always contained its own off-kilter lilt to it — for better and for worse, but mostly for better. When I asked my mom if horoscopes were “a place where Satan waited for you” (a real thing that I was really taught in primary), she laughed, saying, “No, the devil has a lot of other things to be worried about. The ladies at church were probably trying to say they’d rather you focus on reading your scriptures.”

She then paused, quietly wavering at the edge of tradition with a conspiratorial smirk, as she so often did. “But I don’t see the harm in reading them if you like it.”

Still, I avoided them — just to be safe. You never knew how Jesus felt about this sort of thing! By the time I was old enough to to have shrugged off my Jesus-oriented neuroses, I was pretty convinced that astrology was a total waste of my time. In a culture that exalts logic and reason, taking anything astrological seriously was downright transgressive. Blasphemous, but like, against Carl Sagan.

Plus, astrology involved feelings. It was unmistakably feminine (since when have you heard any man right-of-center to Ron Swanson disclose his rising sign?), and I’d long ago learned that feminine = bad. I was NOT a girly girl. I was a cool girl, and cool girls knew astrology was bullshit. I was far too busy Not Hanging Out With Girls Because Of The Drama to bother with my horoscope.

Feelings were a hassle, anyway. They curled up inside the darkest parts of my life and hissed at me when I got anywhere near them.

Logic was safer, less volatile. I leaned into my brain and let the muscle that connected it to my heart atrophy (ok, it’s actually a spinal cord, but roll with me down this metaphorical hill), and the world congratulated me for it. Men especially — and most importantly — liked me best when I was staring down my nose at anything remotely intuitive — or worse: “illogical.”

Ironically, it was my logic-and-reason obsession that led me to the art of telling stories with the stars — which, at its most basic level, is what I believe astrology to be. You see, try as I may, I couldn’t shake the imaginative spirit that had conjured up the rich (though definitely also harmful) theology of my childhood. The core of me craved something that I could take part in creating.

Astrology helps me make sense of the parts of life that science has no answers for.

Despite my best efforts to be the Coolest of Cool Girls, I was deeply empathetic and aching for my brain and my heart to connect once again. So when I found Carl Jung, I didn’t so much dive in as finally come up for air.

Carl Jung was my type of dude. He was a prolific intellectual weirdo who helped found and develop modern psychology. I know Freud is sort of the classic red lipstick of twentieth century psychoanalysts, but finding Carl Jung is like when you finally discover that liquid lipstick lasts longer and comes in any color you could think of.

Jung was known to have a penchant for the mystical and occult, a fascination that eventually led him to develop the ideas of synchronicity and a collective unconscious. Before Dan Harmon’s story wheel and even Joseph Campbell’s Hero’s Journey, we had Carl Jung’s human archetypes and publicly voracious imagination.

He sidled up next to the unknowable and then talked about how it all made him feel.

In short: he was a smart guy who saw intrinsic value in myth-making, and I was here for it. Because myths aren’t lies — quite the opposite, actually. They’re bits of truth we decorate so we can feel them more deeply.

It was through Jung that I found the Myers-Briggs Type Indicator, then tarot, then (finally!) astrology. They didn’t replace my skeptical tendencies, they just moved in with them. Life feels more complete — and, yes, more real — with a dash of magic in it. And I find a great deal of magic when I tip my head skyward and ask the stars for help.

Astrology helps me make sense of the parts of life that science has no answers for. Things like: How do I figure out what I want? What are the things that I need to work on right now? What parts of myself am I hiding or avoiding? It gives me clarity. It helps me take part in creating myself when I spent so much of my life thinking that job belonged entirely to something else.

It’s also pretty intellectually involved. Astrology requires me to draw from all the sorts of knowledge that I feel most energized and engaged by: anthropology, astronomy, history, literature, art, mythology. It’s a place where I can use critical thinking to evaluate and categorize different principles and interpretations. I don’t think I’ll ever be finished learning about astrology, and that helps to remind me that I’m also never finished learning about myself.

There’s this misconception that to believe in astrology is to believe in fate, but in my experience, I’ve found astrology to be less like etched-in-stone destiny and more like a really helpful framework that I use along with a whole bunch of other tools to build my own house.

I am a Taurus Sun and Mercury, after all: the practical bull ruled by Venus, the planet of beauty and creativity. Intellectual, but make it fashion. It’s served me well so far. And as for giving up my Cool Girl cred? It’s SO NICE not to feel like I have to pretend to like Chuck Palahniuk anymore.

I like to think of my astrological knowledge as a reflection pool. I use it to look at the parts of my life I can’t see from my default vantage point. It flexes that muscle between my heart and my brain — a connection I need in order to be a good thinker. I don’t think Carl Sagan would be too mad about it — he did write Contact, after all.

If you like this article, please share it! Your clicks keep us alive!
Tags
astrology
psychology
self-love
self-care