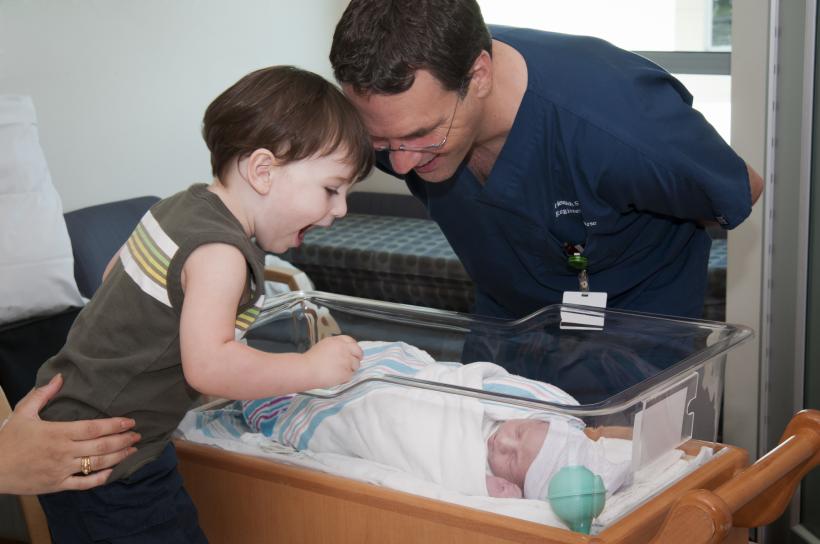 Did you know that male midwives are a thing? Would you choose a male midwife?

Did you know that male midwives are a thing? Call The Midwife — every birth junkie’s favorite show — never depicts a dude doing the work, but alas, they do exist, and in increasing numbers. In the US, men comprise 2% of the midwifery population. In the UK that number is lower, at .4% — clearly not a typical profession choice for men, but a profession just the same. Would you choose a male midwife? Would you refuse one if he were assigned to you?

I picked my first OB from a telephone book. It was 1993, back when telephone books were actually useful and people still carried pagers. I picked him, first because I didn’t have insurance and he took medi-cal, and second because his name was Thomas. My dad’s name is also Thomas. Thomas is the name of a solid person.

I had never had a female provider. The first pap I ever had was performed by a gay man who was seen as pretty radical in my small town. I didn’t think about seeking a female provider because they just weren’t widely available and I didn’t have a good grasp of midwifery care when I was a whole 19-years-old.

Male midwives aren’t a new concept. In the 17th century doctors still weren’t allowed at the bedside of the laboring woman. I guess you could say that men found a work-around? It was in the 19th century, when we gained a better understanding of the infectious process and surgical intervention, that royalty began to opt for a physician as birth attendants. And not surprisingly, it was around then that men started criminalizing midwifery and pushing women out of the practice.

But what about now? Why would a man choose midwifery (or obstetrics, for that matter) when there are so many other specialties that could make a surgeon rich? The only answer that makes sense is they must want to.

You Might Also Like: My Labor And Birth Didn't Go As Planned — And No, I'm Not 'Over' It

I loved my first OB. He was kind and gentle. He had two children of his own. He never challenged my complaints. He responded to my concerns with genuine interest. He said things like, “I’d get an epidural, because why hurt if you don’t have to?” But it wasn’t until my first baby died that I’d see his truest nature.

It was my first pregnancy. When he couldn’t find the baby’s heartbeat on the Doppler, he reassured me that babies hide, and swiftly grabbed the ultrasound machine. And when he found her dead inside me, he sat on his stool with the weight of profound sadness. He sent me for another ultrasound to confirm his findings. He hugged me and gave me heartfelt advice. When I was frightened that I’d lose my baby girl at home, he gave me his personal phone number.

After it was all said and done, it was Dr. M who called me at home to ask me if I’d had my first cycle. It was Dr. M who took a paper calendar and put a big black X on every day that I should have sex for the best possible chance of conception. It was Dr. M who was there to catch my Rainbow Baby.

I could not have asked for a better provider.

But does this mean that men belong in the midwifery model of care?

After Kelsey was born and I was struggling to learn to breastfeed, it was a male nurse that was at my bedside. It was that nurse who showed me how to compress my nipple to fit it in my tiny baby’s mouth, how to nurse lying on my side. His gender was a non-issue for me. He cared for me with absolute kindness and grace.

It never mattered to me.

When it came time to choose a provider for my last two children, I knew I wanted a homebirth, so I called a certified professional midwife. She came to my home for our initial meeting. I opened the door and we embraced. She had long grey hair. She wore Birkenstocks. She’d been catching babies since before I was born. She was every bit the hippie I hoped she’d be. She was perfect.

She attended the birth of both Ella and Max. She held me and encouraged me. And when it was time for me to abandon the homebirth and head to the hospital, she came along and stayed by my side while the hospital midwife sat at the end of my bed.

Did I prefer female care? I preferred homebirth. The attendant was less important.

There are a variety of reasons someone might choose a female care provider, sexual trauma and/or religion being particularly compelling ones, but does a woman make a better care provider? Does our abundance of estrogen make us more compassionate, kinder, more loving? Does testosterone make men more logical or calculated?

Does suggesting that either of those things might be true mean we aren’t seeing the individual nature of human beings as a whole? Aren’t generalizations like this a core part of what women have been fighting against for hundreds and thousands of years?

Can a male midwife be an excellent care provider? I’d say yes.

Here’s what the Ravishly community has to say:

Are you unsure of how to pick a provider? Here are some things to consider:

If you like this article, please share it! Your clicks keep us alive!
Tags
midwife
male midwife
midwifery
birth
pregnancy
loss
miscarriage