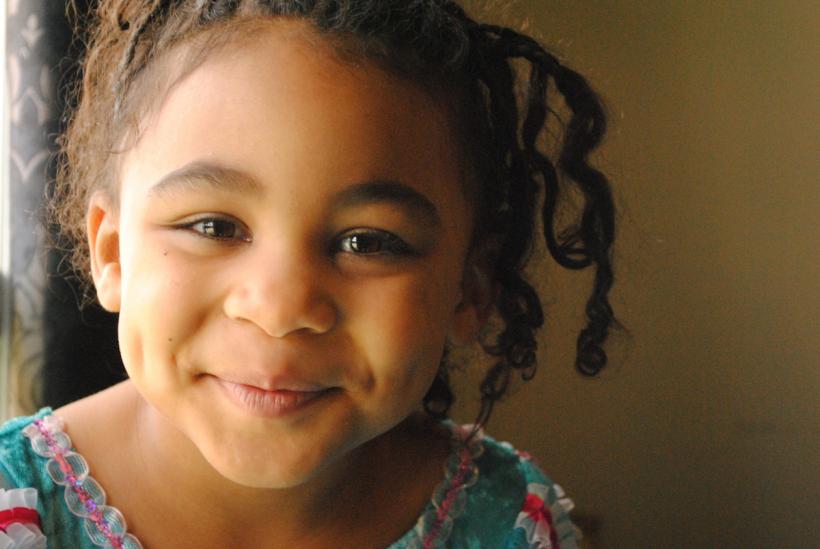 To my daughter: Keep broadcasting to the world, little girl.

I call her “The Towne Crier” as she blurts out random facts. She will talk to strangers in the supermarket, at Target, at Toys "R" Us, at the park, at the bank, and the post office. If she sees a neighbor leaving their house or going to their car, she will yell to them “Hi!! I like your purple shirt!” or “I love your green car!”

It is disarming. It is innocent and sincere. It is the thing that makes the world go around. These connections.

Every single person in Target tonight knows that my daughter, Miriam, was on her way to the bathroom in the front of the store to make poopy. The lady that came into the bathroom as we came out of the stall was informed that she “just made poopy and now we’re going back to the toys!” Oh, and the toilet “didn’t flush too loud” and that “she wasn’t scared anymore.”

Sometimes I worry that her desire to talk to strangers is because I’m doing something wrong.

Am I not giving her enough time or attention? Is she looking for something else she needs in these random strangers? But I know that’s not true. She just loves to talk. Plain and simple. She wants to share her every thought. Her excitement over her play date with Lily and Jude’s birthday party on Saturday is contagious.

So what is it that keeps us grownups from spilling our guts to total strangers?

I would love to pass the time in line at Shoprite by venting about my latest work drama to that lady with the cart full of cat food. I bet that lady with the awesome pink hair wants to hear about the weird rash I suddenly have on my inner arm. And I am positive that the ebbing and flowing bouts of depression I’ve been having lately would be of interest to that guy putting milk in his coffee next to me at Starbucks.

When Miriam has these bursts of truthfulness, I feel strangely proud. Nine times out of ten the stranger she has sweetly accosted loves it. And if they are the one who is bothered or not interested in conversation with this four-year-old tornado, she does not get discouraged. She is persistent. Of course, I am always right next to her (usually with a protective hand on her head) as if to say, “people can be cruel, my little girl,” and I am ready to whisk her away from anyone who has no time for this purest form of entertainment.

Back when I was dating, before I married my husband, I was almost childlike in my blurting out of trivial facts about myself. I would also pose silly little questions to my date to see how open he was and how true to himself he was being. You can’t make up answers to “what was the stupidest thing you did as a child” or “do you like beets?” I would launch into my story of why I like beets (because it was the first thing my mother put on the table for dinner before anything else was ready). Or why I named my retired racing greyhound “Loretta." (Because she was bred for five litters after she finished racing and I adopted her when she was nine years old. I wanted a name that sounded like a lady unknowingly past her prime sitting at the end of the bar.) The best reply to that story was a guy who simply said: “My mother’s name is Loretta.” And he wasn’t kidding.

After all, we are all strangers.

My husband was initially a stranger. (But I do have an equally embarrassing story regarding his mother.) My best friend was a stranger. My favorite coworker was a stranger, too.  So maybe if we would cut to the chase of getting to know each other without façade or pretense, we’d know a lot sooner who we want in our lives and who we don’t.

A little girl approached Miriam while we were shopping at Target. Her mother was right there. This little girl walked up to Miriam and showed her the Shimmer ‘n Shine toy she’d picked out.

The other mother and I were beaming with pride at our girls as they chatted as four-year-olds do. This gorgeous display of human connection. So pure and sweet. It was so much more than what we were seeing.

To my daughter: Keep broadcasting to the world, little girl.

Keep giving out random compliments. Brag about overcoming fears of loud toilets. And everybody makes poopy. Shout it out, lady! I will keep writing about my best and worst days and thoughts. I will keep connecting. I learned from you, Miriam.

If you like this article, please share it! Your clicks keep us alive!
Tags
parenting
Kids
talking
social
strangers

To The Doctor Who Said "God Bless You"
Erica Landis