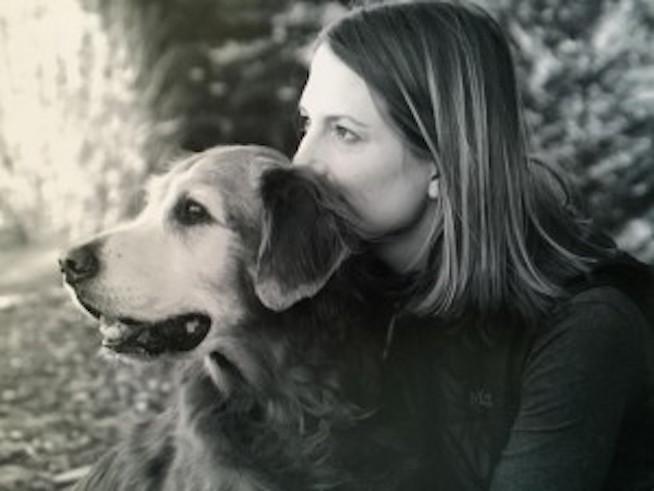 Julie Hill Barton's Dog Medicine is probably one of the toughest reads I've encountered, and I mean that in the very best way possible. I saw myself so clearly in Julie's memoir of mental illness and the road to recovery she found through her golden retriever, Bunker, that it would probably be easiest for me to tell you about how often I didn't cry. This book is real — real hurt, real healing, and real love. That love being between a woman and her dog.

We don't give enough credit to the animals in our lives, despite how much they mean to us. Connecting with them creates a relationship so simple and unconditional that we often forget to regard it, but not Julie. Seeing that relationship articulated so beautifully in Dog Medicine made me want to scoop up all the important pups in my life (eternal gratitude to Dodger, Reno, and Lila) and hold them forever. We all have a Bunker in our lives, and I'm so grateful to Julie for telling us about hers.

As a fellow mentally ill person, this book was a hard but important read. How did you get through reliving these very dark moments, and knowing that you'd be sharing them with the world?

I’ve always had a deep emotional curiosity. I want to understand what happened, what went wrong, and why. So reliving the dark moments was not hard for me. I think this curiosity stems from a kind of self-preservation, because maybe if I understand what happened, I can prevent it from happening again (news flash: it doesn’t work that way). Knowing that I’d be sharing these difficult memories with the world wasn’t hard. I long ago let go of worrying what people think, because I truly feel that when you let yourself be vulnerable, beautiful things will happen.

Sometimes giving our experiences a narrative helps us better understand them. Did you reach any new insights about the experiences you discuss in the memoir?

Yes, absolutely. Writing this book took many years and countless hours, and when I first sat down to write it, you can be sure that I wasn’t as empathetic and kind about particular situations. But as I wrote deeper into each scene, I began to see the situation from others’ perspectives. When you’re writing memoir, you can't only ask yourself, “What was I going through at that moment?” You also must consider everything going on in other people's lives, particularly those who may have wronged or failed you. I’m a firm believer that in most relationships and families, and definitely in my family, love was the foundation of everything, even if things went askew at times.

The book draws beautiful parallels between your life and Bunker's. In the first half, it's quite literal. You're in the middle of a major depressive episode and Bunker is similarly helpless as a young puppy. But as the book progresses, the connection becomes more complex. Did you feel that development in your relationship with Bunker, too?

Well, my connection to him was always unworldly. I have always had such intense and deep connections to the animals in my life. I think it’s because they have no language, no judgment, so I can go to a place where I can turn off those things in myself, and the connection is pure and real and so very honest. My relationship with Bunker was so incredible. I still don’t know if I’ve really encapsulated how profoundly connected I felt to him. Still, to this day, almost nine years after his death, I feel our connection as if he were sitting right beside me. I’m with Elizabeth Gilbert in that I think there's magic in all of our lives. And I think it does us great service not to question that magic. Just honor those gifts and bow in gratitude.

Running is something important to both you and Bunker. Do you still run? What about that activity is so meaningful to you?

I got Bunker hoping that I would have a running partner. As you can probably imagine, considering what happened to him at such a young age, that didn’t work out so well. So with him, I mostly walked. And that was OK. Walking can be like a deep meditation. Of course, running is as well. Now, I get many of my best ideas when I’m running. I take my phone with me and pause and dictate notes into it. I’m not running nearly as much as I wish I was right now, but it’s just a particularly busy time.

Your honesty about the ways your illness hurt those you love is something that really impacted me. It is so hard to recognize that mental illness can lead us to do unlikable things, but that it doesn't make us inherently unlikable. Was that a decision you consciously made, or was it just a natural part of the story you were telling?

I’m a firm believer in the truth, especially when it comes to writing. And the truth was that, when I was suffering from such deep self-hate and sorrow, I hurt a lot of people around me. I was careless with them because, I eventually learned, I was being careless with myself. Two wonderful people showed up in my life and I nearly lost them because of self-sabotage. I salvaged those relationships, but just barely. Also, I was terrible to my mother. Not just in those early-20s years, but in my teens as well. This scenario is not uncommon: Mothers approach their daughters with love and care, but the hurt is so deep in the daughter, that all she can return is rage. I’m extraordinarily lucky because my mother never gave up on me or left me. She kept showing up for me, and I am forever grateful to her for that.

You also discuss the abuse you suffered by your older brother. What would you tell a person experiencing sibling abuse right now?

Oh, wow. I would say, your sibling’s abuse has nothing to do with you. That’s first and foremost. Then I would say, seek outside help. If your parents can’t grasp the devastating effect that the abuse is having on you, find a counselor at school or through a friend, and seek help. But remember, the reason this is happening is that your sibling is in pain, and you’re the closest smaller/weaker/kinder person upon whom they can unleash their wrath. Have empathy and love first and foremost for yourself, and then, when you can, for them. And get help. Say something. It’s important.

At one point in the memoir, you mention worrying that your boyfriend (turned husband!) saw you as a "crazy dog lady," but I think why this book resonates with people is because we all feel that way about our pets. I mean, Dog Movies are a legitimate film genre. Still, we often discuss it as if it's something abnormal that only we experience — why do you think that is?

I love this question. I think it’s because we’re so totally “Westernized” that we’ve forgotten how deeply we used to be connected to our land and to animals. We’re so science/proof/data-driven now that we don’t see unmeasurable connections as real. But what about love? We can’t measure love, can we? But we know it exists. We know it’s real. Our deep connections to our animals are just as real as human love, and maybe even a bit more valuable because they’re so uncomplicated.

Part of industrialization included a demotion of animals in our culture. We deemed them worthy only as food or how they can service us (labor, hunting, etc.). There’s so much more to an animal, and it’s time we took a closer look. Organizations like Farm Sanctuary and Moomah are making great strides toward helping us remember that animals are sentient beings, worthy of so much more than just serving and feeding us. The emotional connection we make with an animal is real, worthy, and, as I knew before publishing Dog Medicine, widely understood to be life-saving.

You find so much meaning in your life with Bunker and in your life's story in general. There are scenes in the memoir that almost seem to have been lifted out of a novel, particularly that ending. Do you find that looking at life in a way that identifies those beautiful meanings and motifs has helped you when remembering the difficult parts of your life?

To write a good memoir, you have to shape meaning out of your life. If I just told you the facts devoid of the meaning they had for me, it would be a pretty boring read. So I did shape a lot of the story because of the meaning, but the most beautiful and magical thing was — it was all already there. The meaning, the love, the joy…they were there and it was up to me to tie all of those strings together. The ending truly was one of those magical moments when I knew there was more to my connection to Bunker than just owner and dog; dog and owner. I know I’ll see him again some day. He was and always will remain my forever dog.