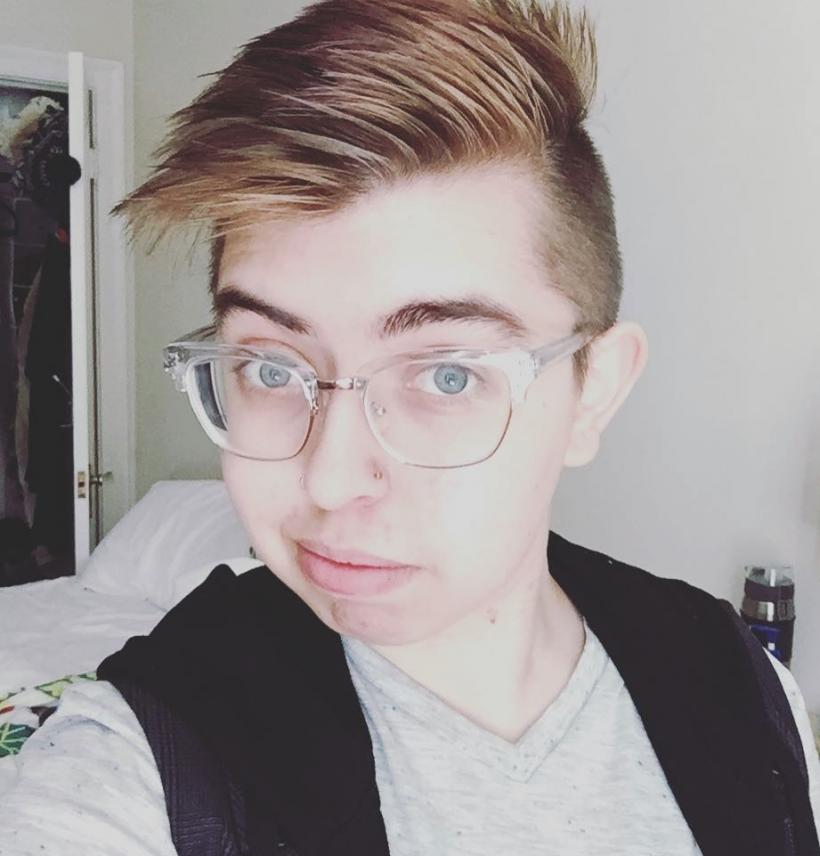 Gender isn't necessarily about certainty. Sometimes it's about reveling in the  uncertainty of it all.

Sam Dylan Finch doesn't need much of an introduction here at Ravishly. But I'll give you one anyway: Sam is the founder of Let's Queer Things Up, a staff writer at Ravishly, and an editor for the lucky folks over at Everyday Feminism.

He also happens to be one of my best friends. Secret-Facebook-group official and everything.

I don't really know most of the people I interview for this feature, so my love for them is in most ways a deep admiration. There's a word for it in American Sign Language, a word for loving someone or something for what they create, or do, or make you feel. And then there's a word for deep, unconditional, heartfelt love. We don't have them in English, but believe me when I tell you I feel both of those types of love for Sam, the latter especially.

He is a ray of light. Not sunshine — Sam's light is more complicated than that. It comes from somewhere else, somewhere that is delicate and ferocious and vulnerable and courageous all at once. We don't have a word for it in English either. I think the closest we can get is transcendent. That's Sam, and the light he shines on his little corner of the world — a corner that is getting bigger and bigger everyday.

He's just... He's awesome, OK? His soul is pretty dope, and he is definitely a Person We Love, forever and ever.

You've mentioned that this career wasn't your “plan” at first. How did this party end up getting started?

I think the most accurate description of my career is something like, “I tripped and fell into this.” It started with my blog, Let's Queer Things Up, which I only started because I had just moved across the country and had a lot of time on my hands, since I didn't know anyone yet.

The blog went viral in October of 2014, and the world was like, “Whoa, who is this Sam Dylan Finch kid?” It generated a lot of interest in my work, which eventually led to opportunities to write for other magazines, travel and speak at universities, and eventually get published in an actual book.

Don't ask how I went viral, because it was honestly an accident and totally unplanned. It had something to do with Facebook, but beyond that, I have no clue.

The party is hopping now. And the path here was totally random and bumpy at times, but I wouldn't change it one bit.

You are a pro at Dealing With Shitty People Online. How do you know when to not feed the trolls and when to use negative comments to start a conversation?

“Pro” is such a generous word, haha. I really do try. I think it's about assessing intention, my own mental state, and deciding when the other person has the capacity to do better — and when I have the capacity to help them do better.

It's ultimately about meeting people where they're at, while being respectful of the boundaries I need to set for myself in order to stay sane.

And if all else fails, screenshot those fuckers and blast them — you know, in an educational way — on your media platforms for other folks to learn from. There's always a learning opportunity in there, a teachable moment... It's just a matter of figuring out the most effective way to leverage those conversations.

What does being a “non-binary alien boy” mean to you? What advice do you have for our readers who don't feel comfortable in the gender binary but still have definite masculine/feminine leanings?

Non-binary, to me, means not identifying exclusively as 100% masculine or 100% feminine. It's kind of like the “build your own pizza” of gender. (I really like pizza. But I digress.)

I've been calling myself an “alien boy” pretty often now just because it really speaks to my fraught relationship with masculinity — how I feel like there is a masculine component to my gender (hence “boy”), but gender norms around masculinity make me feel alienated from actually inhabiting that masculinity.

I could talk for daaaays about my alien boy feels...

As for advice, I think people put too much pressure on themselves to know exactly what they are. Take all the anxious energy about needing to be so sure about it and invest it in just exploring instead.

Drop all expectations — disregard every “should” or “shouldn't” — and dive in, because gender isn't necessarily about certainty. Sometimes it's about reveling in the uncertainty of it all.

Top 5 requirements for being a good ally: Go.

Know how to apologize — like, really apologize. I learned this from Franchesca Ramsey's phenomenal video on apologizing that I think is required viewing for any and all allies on planet earth.

Understand that you don't know what you don't know. Be curious and be open to what others have to say. Never assume that you've learned all there is to know about a particular community or issue.

Don't get angry about what individuals do to cope with an oppressive system — get angry at the system. Like, as a trans guy who is seen as a man by some people who walk by, I'm not upset if a woman crosses the street at night because she feels unsafe. I'm pissed about rape culture and misogyny that has made her feel unsafe in the first place.

And lastly, check your entitlement. Oppressed folks don't owe you anything, not even if you're an A+ Ally with the best intentions. Not an education, not their time, not access to their spaces. Nothing.

Top 5 things to eat when you're having a bad day: Go!

Ethiopian food at a restaurant.

Ethiopian food delivered to my apartment.

Ethiopian food with my friends.

Ethiopian food by myself.

Top 5 things you love most about yourself: GO!

I love my willingness to be honest as fuck, even when it means getting vulnerable and a little too real.

I love my recklessness, in a way, because without it, I wouldn't have taken so many risks these last two years, and I wouldn't be here now.

I love the courage that I have to live my life authentically, regardless of whether or not I have the approval of other people.

I love that even though it's a bummer to get something wrong, I always do my best to make it right.

And let's be real, I just love how queer I am.

...That was six things, but like, they were six really great things, amirite??

How do you juggle living with agoraphobia and having a job that leads to speaking engagements, interviews, book readings, etc?

It involves a lot of panic attacks? It involves feeling like the world is going to end? It involves doing things that I hate in order to be able to do what I love.

The best moment of my career by far was giving a keynote address at the 2015 Active Minds National Mental Health on Campus Conference. And the night before I got on that plane? I was throwing up, hyperventilating, and crying on my partner's shoulder.

There are two silver linings here: The first is that it gets a little bit easier every time. The second is that it's always worth it.

How do you find a balance between sharing your experiences with transition and mental illness (and living at the intersection of both!) and allowing yourself privacy? I often struggle separating shame from privacy with regards to mental health — what helps you engage in healthy “alone” time?

I think the first thing to remember is that privacy and healthy boundaries are different for each and every person. I certainly don't expect everyone to go start a blog tomorrow and reveal every detail about their traumas or struggles.

One of the challenges we all deal with in the age of social media is feeling out our personal boundaries — for my mom, for example, that's being as close to “off the grid” as possible. For me, it's what most people would deem “oversharing.”

At the end of the day, determining what to share and what to keep for yourself is about testing the waters. It's about inching a little bit outside of your comfort zone and seeing how it feels. It's figuring out what our own unique forms of empowerment might look like.

Empowerment for one person could be opening up to a friend for the first time and asking for help. Empowerment for me has looked like telling six million people that I'm mentally ill. You know, haha, to each their own.

As for alone time, I'm terrible at unplugging. Pilates has been helpful for me because I can't really get sucked into my phone when I'm focusing on my body. It's good to try to set aside intentional time to just exist with yourself — even if that time is only a few hours out of your week.

Finally, who are some people you love? What folks should we be looking to?

I will admit that I am totally biased in this regard, but I think anyone with a passion for social justice content creators should familiarize themselves with the contributors at Everyday Feminism. EF has assembled such an amazing crew of diverse thinkers and artists, representing so many different communities and identities. They're brilliant and give me so much hope for the future.

If you like this article, please share it! Your clicks keep us alive!
Tags
Sam Dylan Finch
let's queer things up
mental health
LGBTQ
Transgender
nonbinary