Kanye Hangs Out With Trump, World Prays For Miracle 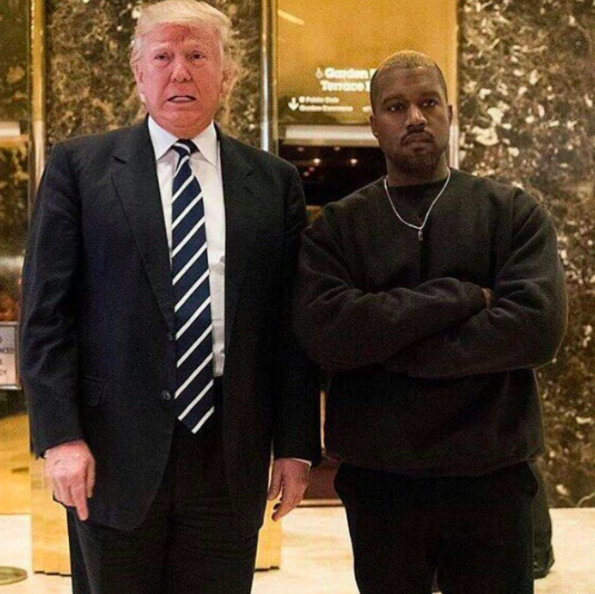 Yep that’s right. These two dudes got together to hang out. Why? No one knows. But does anyone really understand either of these guys? Enigmas, both of them.

It’s no secret that Kanye has had more than his fair share of mental health issues lately. Right around Thanksgiving, Kanye lost his shit and ended up in the hospital. His tours are on hold indefinitely and it’s reported that Kim is pretty pissed about it all.

Speculating about his mental health (or lack thereof) isn’t helpful or fair, but he looks a lot like me before mood stabilizers. Also, he bleached his hair blonde which isn’t commentary on his mental health, but a little odd nonetheless. I’m just saying. He was admitted to UCLA Medical Center to adjust his meds, or something like that. But he’s out now, and what better time to see Trump than while you’re trying to settle into a new med regimen!

I’m hoping this means one of two things, either:

A. He’s going to sing a song he composed about Lamictal. The chorus of which goes something like, “I highly recommend you seek psychiatric evaluaaaaation, Donalllllllllld. Please.” This will move Donald to tears, and to the office of the highly qualified Dr. Fieve, who is an expert on bipolar disorder and just right up the way on Fifth Ave.

B. Second option is The Don fired Mike Pence and Kanye is being nominated as the new VP. #kanye2020. There is literally no choice more awful than Pence. Even Kanye.
I’m not saying Donald Trump is crazy, I’m just saying Donald Trump is probably crazy.
Hey I have a great idea! Let’s elect a narcissistic moron to lead the free world.

I’m holding out hope that some sort of miracle is going to occur before the inauguration in January. And should Donald Trump be ousted, even if it’s Kanye that ends up in the Oval, I hereby swear to the one and only God in heaven (that I don’t believe in), that I will pray every day, keep the Sabbath holy, obey all 10 Commandments (probably), buy only fair trade organic, wear only clothing made from a women’s collective in Nepal, and stop using Amazon Prime.

If you like this article, please share it! Your clicks keep us alive!
Tags
Trump
President
Election
Kanye
meeting
Trump Tower
#kanye2020