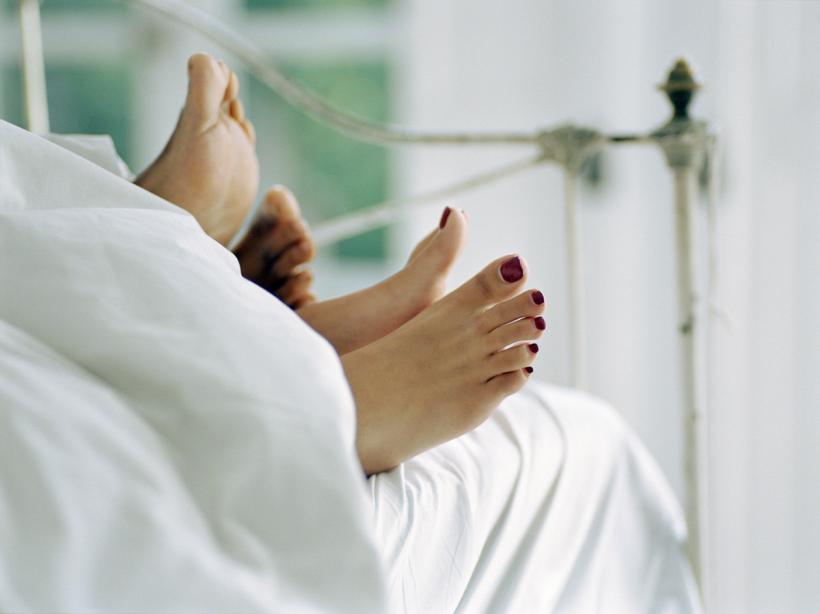 I’m here to tell you that sometimes, you just need to climax...

When one thinks about what a healthy sex life looks like, we often envision passion and spontaneity. While both of those things certainly can be an integral part of an intimate relationship, I don’t happen to think they are as necessary as the movies would have us believe. It’s true, we’ve been conditioned since a young age to believe that sex should look like can’t wait another second to tear your clothes off so we’re doin’ it in the apartment building elevator after a sexy, romantic dinner at the fancy new restaurant that features an aphrodisiac menu.

In reality, and especially once children are in the mix, making sex part of your routine, like a scheduled chore you check off your list each week, can be the best thing for you… at least, it was for me.

After we had our first kid, we decided it would be a good idea to have a weekly standing sex date.

This meant that we would for sure orgasm and have a moment of intimacy with one another at least weekly. In terms of what research tells us about lasting relationships, having sex on average one time per week felt right. We decided that naptime on Saturdays would be our go-to for our weekly sex date. Why a mid-day rendezvous? Why would I decide to display my postpartum body in all its stretched out, mammary gland leaking glory during daylight hours? If we’re being honest, it was because we were just too tired to do it at night.

Because our kid was a terrible sleeper, we were both up a lot all night, every night for years. This meant that, by the time the children (yes, we had a second quite quickly after the first — thanks scheduled sex!) were in bed for the night, we were both too fried to do more than sit next to each other on the couch and watch junk TV for an hour before passing out. We could pretty much guarantee, however, that, with both of us home on Saturdays mid-day, we could manage to get both kids down for a nap around the same time. This became our sexy time – usually followed by a nap for both of us as well!

Now, you may be wondering, what about spontaneity? What about passion?

I’m here to tell you that sometimes, you just need to climax, preferably with your partner, preferably on a weekly basis. When you’re all caught up in maintaining the household and managing the baby and meeting work deadlines and getting the car in the shop after the engine light has been on for months (just me?), you (gasp!) forget that you need intimacy with yourself and your partner. For me, the best way to get that need met on a very regular, consistent, predictable basis, was to schedule it for naptime on Saturdays.

You Might Also Like: A Mom’s Guide To Wicked Sex (Or Regular Sex, Take Whatever You Can Get)

Why must we orgasm? Why do we need to sometimes force intimacy in our relationship? Well, oxytocin, for one thing. While we may have heaps of it gushing toward our baby, if we’re not getting pleasure from our partner, we can often begin to feel resentful and angry toward them. Especially as parents, the tendency to neglect the relationship in order to care for the children is just too tempting. We feel as though there will be time for that later but, for so many, later never comes and the relationship just fizzles out. Before you know it, you feel like roommates or ships who pass in the night on the way to heat up formula or change diapers or let the dog out before he pukes on the new area rug.

When sex is scheduled, predictable, and part of your routine, even if it’s not rip-your-clothes-off spontaneous and sexy, it’s still doing what it’s supposed to do. You experience a moment of coital connectedness with your partner. You catch a glimpse of yourself as a sexual being. Your brain is forced to take a break from prioritizing work issues and lunch packing and area rug cleaning (again!). This is all really valuable stuff! And it gets even better!

As our kids have gotten older (and are sleeping through the night now, woot!), we’ve found the time, space and stamina to add more spontaneous sexual encounters to our relationship. Now, we still most definitely have sex on Saturdays (whether we get the kids to nap or just plop them in front of a television show for 20 minutes) but we also find ourselves initiating intimacy on other days of the week as well. I firmly believe that there is room for that in large part due to the fact that our sex life didn’t die after we had a baby. Certainly, there were times when our Saturday sex date felt like just another chore on my to do list but, honestly, once we were naked and orgasms were imminent, there were no regrets.

If you like this article, please share it! Your clicks keep us alive!
Tags
Sex
marriage
Schedule
couples
intimacy
parenting