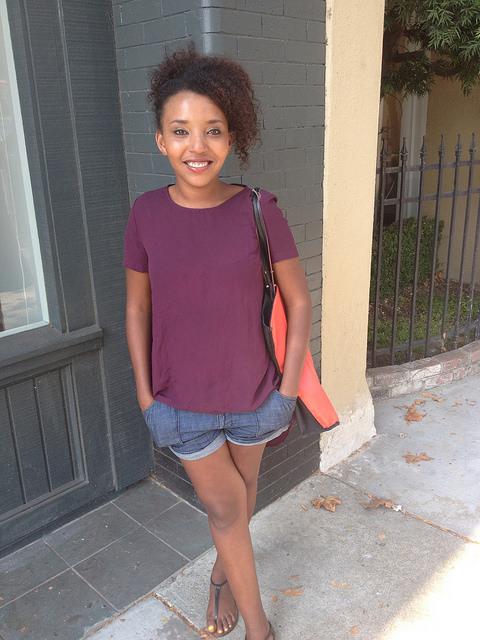 Where do you go to school?

I go to Laney, the city community college, and I’m working at Club Monaco—one of the top fashion stores; I’m one of the stylists there.

Is that your goal, to be in fashion?

Actually, no. Club Monaco is in New York Fashion Week and London Fashion Week, but I took this job because my sister did it before me. She’s not a fashion person either, she majored in International Relations and African Studies and I’m doing Sociology and African Studies. I would like to work with juvenile delinquents or in social work. I do like fashion, I like to dress up and look good. I like to empower myself as a woman, but I’m not a fashion person.

Is social work what you’re working on at Laney?

Where did you get your shirt, bag and sandals?

I actually stole my sandals from my sister. I needed to borrow them for work—I usually wear high heels but my feet were hurting that day, and I never gave them back, it’s been like three months.

I got this from my mom, I usually never carry a bag but my mom got it for Christmas last year. It’s my first purse.

Where are you from?

I’m originally from Ethiopia, but I was adopted and I grew up in Vermont with 10 other siblings. Seven of us are from all over the world.

I was an only child growing up, until I was 12. So coming to a family where I didn’t speak the language and where there were people from all over the world from countries with names I had never heard—like Kazakhstan or Mexico—it was all pretty shocking. We have a town called “Mexico” in Ethiopia where I live so I was extra-shocked when I learned my dad was from Mexico and his mom is part of the Hispanic community. And this was all within all-white community, so it helped me out to learn English really quickly. I've been here 8 years now.

What was the process like, moving from Ethiopia to the States?

I wasn’t young like most other kids who get adopted. My grandma was the one who was raising me, so she thought it would be helpful. My grandma’s dream was for me to have a better future, better education, so she decided to send me out here. I wasn’t really happy, but I didn’t really have the option to say no—it’s America and in Ethiopia when you hear about America, it’s like, money-grows-on-a-tree kind of thing. It’s a huge, huge, huge deal for anybody to even talk to a white person, let alone come to the country.

Do you still talk to your grandma?

I do. She is my biggest inspiration. I always talk to her, I actually missed her a few days ago so I stayed up late writing these huge comments on Instagram and posting on Facebook. I was kind of shocked with myself this morning when I read it because it was like 1 am when I wrote it and I had found an old photo that I had with her. She’s definitely the person that I would talk to most.

That’s wonderful, how do you talk to each other?

Well, we can't online; she would have to go to a computer session—like a little store in Ethiopia to go to a computer—but she doesn’t do that, she’s old and she was never educated. But she has a cell phone. Actually, my birth mom bought it for her a few months ago and I’m actually nervous to call her on that cell phone because I don’t know if she can actually pick it up and talk to me—so I call her on the house phone still—but everybody's been telling me to call her cell phone.

And I go visit. My parents out here, my adopted parents, are extremely nice and generous people.

[The train goes by and honks the horn the whole time]:

My mom loves to hear that. She actually just bought a boat right there so she can hear the train. She lives in Vermont but she comes here to spend most of her time in the winter.

Is that how you discovered the Bay?

Well, both my adopted parents grew up in California. My mom was born in Oakland and my dad was from LA but now his parents live in Walnut Creek so we always came here for Christmas or to visit grandparents.

Do you love it here?

I do! Like I said, I grew up in Vermont in an all-white community. My family was the most diverse.

You have nine siblings?

I do. My parents have three of their own, and seven of us are adopted.

Where are the seven kids adopted from?

Four are from Ethiopia, three are from Kazakhstan, and one is from Russia. My dad is half Spanish and half white, and my mom is half Irish and half American so we’re pretty much the most diverse family you could ever meet. And we did it before Angelina Jolie, so yeah [laughs].

Why do you think your parents wanted such a huge, diverse family?

Well, my dad has two female siblings. His dad is white, very educated, the very small family thing. He has always had, on his mom’s side, the whole Hispanic community, and he loved that he was never “that guy”—that was so family-oriented—until he met my mom. My mom has two sisters and brother, she grew up in a family that she didn’t enjoy that much. It was a hard life so she wanted to have her own kids and have a big family and raise them in her own way and give them things that she never had. So it’s a weird match between them but it's one of the best families ever.

That’s wonderful. You seem so happy!

I’m definitely happy. I have met a lot of adopted kids that have had a pretty horrible experience compared to mine. I was surprised that people would pay that much money to get a kid out here and they would treat them poorly, but with my parents I think I got really lucky. I think all my siblings did too. We’re proud of that.

What are you doing now?

I actually just came to visit my mom. I just got out of class and my brother and I were just having a beer with her. She’s a cool one.

She has an organization called Selamta, based in Ethiopia. A lot of her kids are from orphanages (aside from me, that is). She saw a lot of children get adopted from countries and how the parents treated them later on; it wasn’t all bad but it's difficult when you have a kid that has had a very different lifestyle before being adopted by foreign parents. She worked with a family a while back and decided to open up her own organization called The Selamta Family Project. In Ethiopia “selamta” means “peace.”

She asked us, her own kids, if we would want the kids from the project to be adopted abroad or if we think they should be raised in their home countries—we all decided that it’s not worth it. As long as they can get the best education they could ever get, and opportunities that they would never have, they should grow up in their own country. It’s not always a piece of cake.

So you think education is the key?

I learned from my grandma, education is the best key—even though she never went to school. She always told me, “Education is for you.” Knowledge is power.

Not all of us go to college. My dad never went to college and though he’s a successful business man, I definitely believe, for myself, education is the best way.