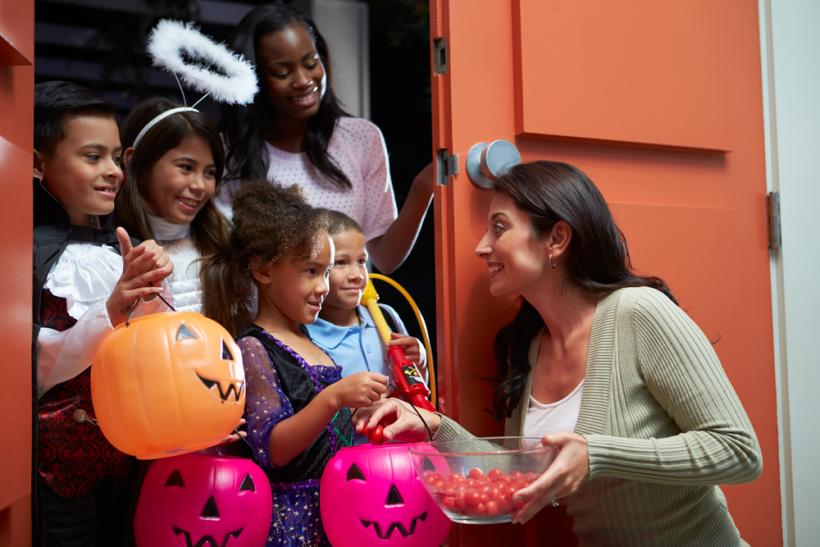 I love trick-or-treating, and I’m here to preach its gospel.

Of all the spaces I occupy online, parenting groups are one of my least favorite. This time of year, they’re filled with conversations about Halloween. As a holiday, Halloween is perfectly positioned to activate multiple parenting anxieties. After all, it occupies a weird space between religion and secularism and involves costumes, candy, and strangers — so a lot of hot-button issues for parents.

That’s why I wasn’t surprised to see parents discussing their anxiety about kids trick-or-treating in one of my parenting group, but one phrase did surprise me. A father, nervous about the idea of kids going door-to-door, said, “I’d rather them go to the mall."

I like that my child goes door-to-door, and I like that he does it in his own neighborhood. It gives my kid a chance to practice social skills like knocking on someone’s door and being polite, and it gives him an opportunity to meet neighbors he would otherwise pass right by.​

Excuse me? The mall?

While non-traditional trick-or-treating events, like trunk-or-treat or yes, even events at the mall, offer comfort to some parents, I am not one of them.

I’m not here to call anyone out, and I don’t want to be too hard on “I’d rather them go to the mall” guy or any parent who is nervous about the idea of kids going door to door. I understand that the idea of the ritual of trick-or-treating happening in a contained and controlled environment is comforting — especially for those of us who grew up doing “candy inspections” and being fed horror stories about poisoned kids.

But even as I relate to the parental anxiety around the holiday, I don’t see the mall, or any other insulated event, as a solution. I think kids and parents need old school trick-or-treating. I think it has a value far greater than the sum of its candy.

I love trick-or-treating, and I’m here to preach its gospel.

I first learned about trunk-or-treating when my child was a baby, back in 2015. But I was able to find a New York Times article that aptly referred to it as “Halloween Tailgating” from 2006. In that piece, the reporter primarily focused on trunk-or-treat events as a good alternative in rural communities where houses are often so spaced out as to make traditional candy gathering nearly impossible.

Many trunk-or-treat events take place in church parking lots, and many churches see them as a great way to reach out to families that might not otherwise end up at church. An NPR article placed the genesis of the trunk-or-treat sometime in the late nineties and was much more explicit about the Christian influence. Halloween historian Lesley Bannatyne explains that in addition to physical safety concerns, trunk-or-treat events allow churches to “control it and keep away the imagery that [they] don't like.”

Nowadays, such events are widespread. Other controlled trick-or-treating events in my area happen at the zoo and even the historical museum, where children collect modern candy in an old-timey fake town.

My childhood trick-or-treating was far from idyllic. We moved to a country road when I was still in elementary school, and our house across the street from a soybean field didn’t offer great options for going door-to-door. This was before the era of trunk-or-treating, so I usually went over to a friend’s house on Halloween night, and one friend’s mother would even drive us around to more affluent neighborhoods, the kind of places where they give out king-size candy bars. Effectively, we were the kids from that classic Dear Prudence letter, the one with the rich lady bitching that poor kids came to her neighborhood on Halloween.

My kid started trick-or-treating when he was a year old, which incidentally was the year we moved to our current neighborhood. Now we take him out every year, staying close to home and covering an area of only three or so blocks. We live in a fairly tight-knit community, so we know almost everyone else who is out and about. Sometimes one family will host a small get-together before or after the actual trick-or-treating begins, which is always cozy. It’s made me think a lot about the cultural idea of Halloween, what my own Halloweens were like as a kid, and why any of this matters.

What I’ve settled on is this: I like that my child goes door-to-door, and I like that he does it in his own neighborhood. It gives my kid a chance to practice social skills like knocking on someone’s door and being polite, and it gives him an opportunity to meet neighbors he would otherwise pass right by.

Trick-or-treating gives you an excuse to explore your neighborhood in a different way.

This summer, a dad on my block and I were discussing the ice cream trucks that zoom down our street all summer long. He’s more of a hippie than I am, and his kids eat exceptionally well and say things like, “I love spinach and spinach loves me.” I mentioned that when an older boy had offered to buy my toddler an ice cream cone, I let him, despite my misgivings about the ice cream itself. He nodding knowingly and said, “you have to, so much of food is about community, and I feel like in those cases the community benefit outweighs whatever the junk food is.”

That stuck with me, and it so perfectly highlights why I’m not taking my kid to the mall, or a parking lot, to gather candy this Halloween. It’s because the candy is not the point. Candy is nice, but candy can be bought at the store. The real value is in the community building.

If you like this article, please share it! Your clicks keep us alive!
Tags
trick-or-treating
Halloween
moms
parents