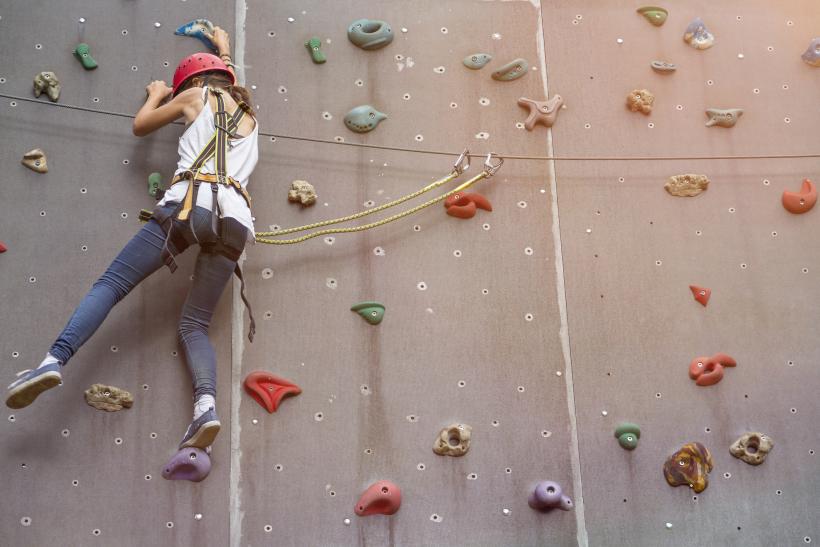 We could go to the gym and achieve huge physical feats together as we started climbing the rock walls.

My whole life I’ve been thin, skinny-fat, slender — even frail. Being on the small end never once made me athletic or particularly good at anything physical. It did get me off the hook for having to do any exercise, though. For the Presidential Physical Fitness Test, I ran three laps instead of the full four. But it took me so long, and I’m so little that no one noticed.

Yes, I’ve gone my entire life without running a mile.

My diet is awesome, I don’t smoke, and I rarely drink. So sure, I’m healthy, but I never felt like my body was capable of much. And like many women, I’ve struggled to like my body for all kinds of reasons. It was always missing something that someone else had.

But when I got married and wanted to start a family, I truly hated my body.

I already knew just about everything you would ever want to know about conception, fertility, and hormones. After all, I’m a nurse and health writer by trade. I know the science. I know what's real and what's a myth.

I began avoiding mirrors, refusing to look at the reflection of a body that couldn’t do anything. A body that was failing me.

When my husband suggested a New Year’s vacation, I quickly agreed — mostly because of stories I’d heard about people getting pregnant when they were “just not worrying about it” on relaxing trips. New Year’s Eve in Chattanooga was shockingly cold, so we decided to check out an enormous rock climbing gym in the center of downtown.

We were both in jeans as we walked passed the wild-looking die-hards decked out in ropes, clips, chalk bags and appropriately flexible clothing. But we found the beginners section with large, easy hold and an auto belay that slowly lowers you without another person. Touching the faux rocks, I panicked a little. What if I can’t even hold myself on the wall? What if I can’t pull myself to the next rock?

But as I hiked my foot up to the first hold, I found myself being easily lifted up the wall. Each hold took me a few feet higher. Then I was at the peak.

Two hours later I was exhausted, my hands blistered and ripped, and I was sweating — which I don’t do often. I got on my phone checking the membership rates of our local climbing gym. I wanted to feel this sensation again.

You Might Also Like: My Infertility Struggle Opened Me Up To A Sisterhood I Never Knew Existed

I spent the next several months hanging from my fingertips, reaching for impossible holds, and climbing a little bit higher or a little bit harder. Rock climbing is very different from other sports in one major way. It’s not about strength, endurance, technique or body type — it’s a puzzle you solve with your body. I can’t pull up with one arm or reach high holds like my husband. But he can’t flex his hips to use high foot hold or crunch into a little ball between large jugs like I can.

I’ve always been afraid of heights, and suddenly I was 3-stories high, right foot crunched up near my belly button, left foot extended out like a kung-fu master, trying to inch my fingers towards a 1x2 inch flake of rock a foot above my head. My husband below was yelling “just push straight up on that leg. Push!”

He wanted me to jump. I jumped. And I got it. Like Spiderwoman.

No two people climb a route the same way. That’s why sections of a climb are called ‘problems.’ You’ve got to solve them mentally and physically. And you have to do it while working with another person. That beginner automatic belay systems only get you so far. So my husband and I learned to belay each other.

Climbing made us partners again.

Spending a few of hours tied together, holding your partner 70 feet in the air, is quite the bonding experience. You have to communicate with and trust your belay partner. Trying to conceive puts enormous stress on couples, and we were no exception. But now, we could go to the gym and achieve huge physical feats together, over and over again, which strengthened our connection.

Many women continue to climb through their pregnancy. But when we finally got that plus sign, I decided to take a break. Now, years later, our daughter has logged quite a few hours in the climbing gym. The first day of preschool we were told: “she really likes to climb things.”

Yeah, she gets that from her mom.

If you like this article, please share it! Your clicks keep us alive!
Tags
pregnancy
fertility
fertility struggles
rock climbing

When I Couldn’t Get Pregnant, I Started Climbing The (Rock) Walls
Megan Whitaker