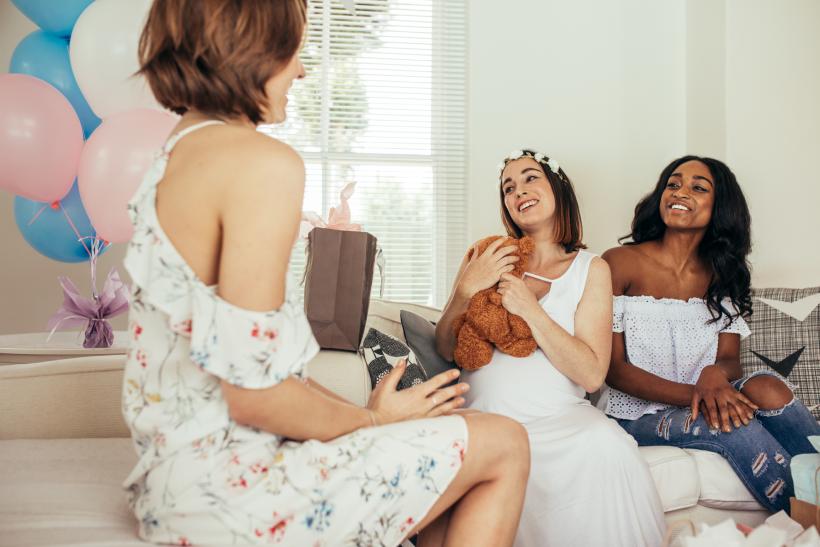 A couple of years ago, I used to brag that all of my friends were engaged. I’d remind those friends that the only time they called me was to talk about their wedding plans, ask me to be their bridesmaid, or tell me about the kind of wedding gifts they received that they’ll absolutely never use.

I was okay with those phone calls because we were in our early twenties, and even though I wasn’t seriously dating anyone, ever, I was happy that all of my friends found the loves of their lives. But now, a lot has changed.

I recently started getting phone calls from my friends that are a bit more serious and a bit more frightening to hear. They call — once or twice a month — to tell me that they are pregnant.

That they are having a baby. A real, live baby, who will cry, scream, keep them up at night, and probably give them a reason to use all those odd wedding gifts from before (a sound machine will come in handy now, and so will an ice cream maker).

I’m no longer over-the-moon happy for them; I’ve become jealous. The other day, after receiving the third pregnant friend phone call of 2018, I turned to my boyfriend, who I’ve been dating for close to two years and isn’t planning on popping the question anytime soon, and said, “Let’s have a baby.”

I didn’t really mean it, but I said it because I felt like it was what everyone else I knew was doing and I wanted, in that moment, to be more like them. I’ve felt like ever since all of my pals got married, and got mortgages, and became moms, our friendships have grown apart. We have less things in common now, and because of that, sometimes we have nothing to talk about.

Sometimes, I even feel embarrassed to talk to those friends, because their life seems like organized chaos, and mine just seems chaotic.

I’m working on my career and trying to keep my two-year relationship with my boyfriend out of the couple’s therapist’s office. I’m not even sure if the mosh-posh of food I mush together and call dinner some nights is healthy enough for me to eat, let alone a child. I’m not ready to be mom material, and for that, I sometimes feel intimidated by my friends.

You Might Also Like: Why I Get So Frustrated With My Pregnant Friends And Friends With Kids

Over pizza, wine, and bottles of freshly pumped breast milk, I finally came clean and told one of my friends how I felt.

“I just feel like we aren’t the same,” I told her, as she burped her baby and I stuffed another slice of pizza into my mouth.

“We aren’t the same,” she said, without a second thought. “But we’re still friends. We just have different things going on, and that’s cool. It makes it more exciting to hang out with a person who isn’t doing the same exact thing as me.”

She was right. Our friendship still existed, and while she had a baby — a boy — and a big house of her own, at the core, we were still two people with years of history as good friends, trekking through life on our own different paths. I was the one who felt weird around my friends; they never once told me that they felt weird around me because I wasn’t married, pregnant, or nearly close to either of those two things.

What I have learned, through almost a decade of watching most of my friends live one way, and myself another, is that comparing and contrasting where you are in life with where other people are is a complete recipe for disaster. If you are using a point system, rewarding others for doing what you’re not ready to do in life, you are only going to make yourself feel like you’re not enough, when really there’s so much to celebrate in your own life.

So I’m finishing my twenties without an engagement ring, or a stack of wedding photos, or a baby — but that’s okay.

If you like this article, please share it! Your clicks keep us alive!
Tags
pregnancy
child-free
Kids
Friends