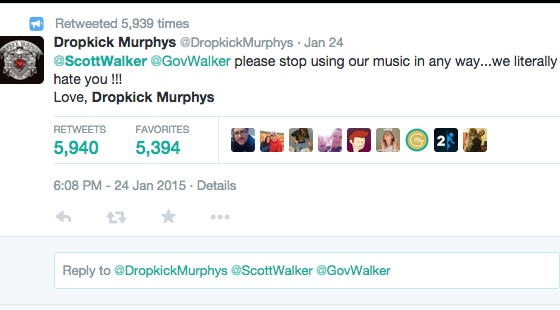 Scott Walker, governor of Wisconsin, is on the path to becoming a presidential candidate in 2016. Just don't expect the Dropkick Murphys to vote for him.

Recently, Walker used a snippet of the Celtic punk-ska band's jam "I'm Shipping Up to Boston" at an Iowa GOP summit. (Because Republicans have such a great track record with blasting music during summits.)

And, well . . . Dropkick Murphys were not happy. On Saturday, the band tweeted: "Please stop using our music in any way...we literally hate you!!! Love, Dropkick Murphys."

Why do they hate Walker? Possibly because . . .

1. He is against gay marriage, but won't admit it publicly. (He blames it on his oath to follow the Constitution.)

2. He is opposed to abortion (even in cases of rape and incest), but supports abstinence-only sex education. (Is it worth pointing out the irony . . . ?)

3. Though the Supreme Court overruled it, Walker signed a law requiring voters to show government-issued IDs.

4. Walker raised teachers' (and other state workers') health insurance costs in Wisconisn, cut the education budget, favors private and parochial education over public schooling, and relies heavily on standardized testing in the classroom. Not surprisingly, many in the education system disdain him.

5. That whole union blood-letting thing that almost got him recalled.

So, yeah. If you need me, I'll be listening to the Dropkick Murphys.