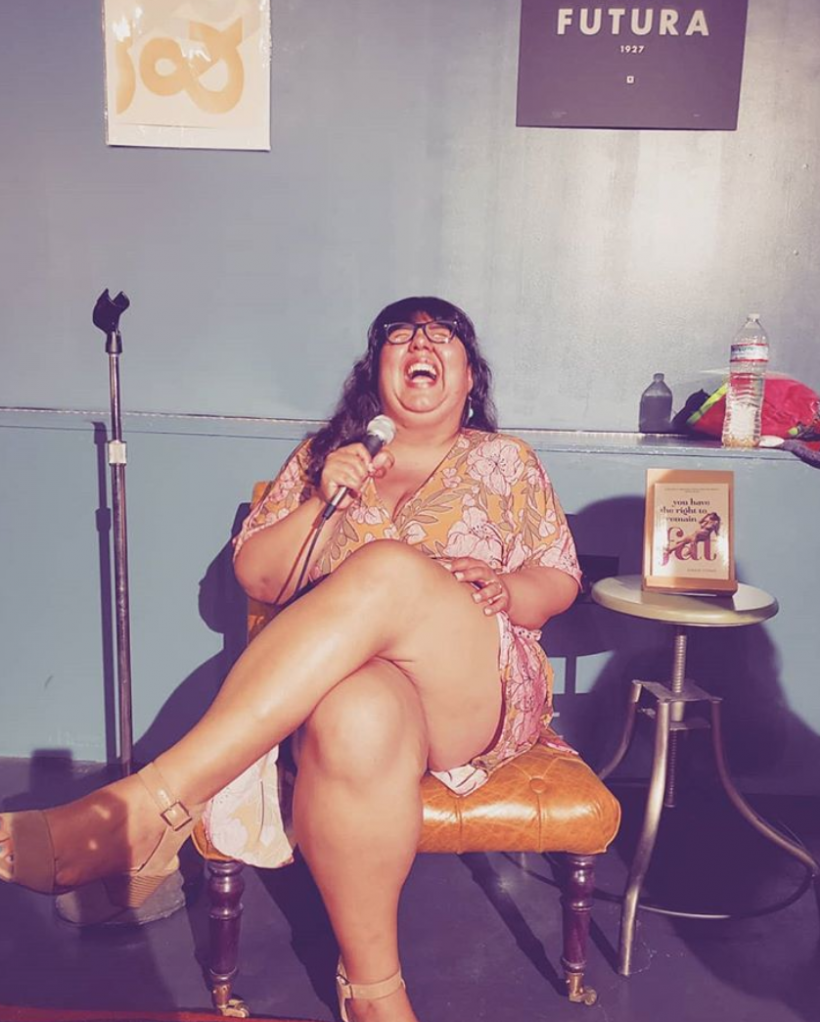 My new book, You Have the Right to Remain Fat, came out earlier this week. It’s a hybrid of memoir and cultural criticism. In the book I examine diet culture from a first person perspective and then expand outward to look at the bigger social picture that I feel contextualizes these tiny, on-the-ground moments.

There were a lot of things to consider when writing this book — how to pace the lines of argument, what characters or pieces of information needed to be included, and how much of myself to share. And there was one other thing, the hardest thing for me: how the audience would receive this work.

In the world of commercial publishing the audience is the potential market for your book. In order for a publisher to take on a book they have to have evidence that the market is ready for your work. We look at other similar books and their sales records to see what the market is telling us about the potential interest. And the author may tweak the tone or the message of their work to fit that need.

You Might Also Like: Virgie Tovar’s New Book, "You Have The Right To Remain Fat," Has Arrived To Blow Your Mind

It’s kind of impossible to anticipate what the reader is ready to hear about a topic that is so controversial and so layered. Also, who is the reader? A feminist with 15 years of patriarchy-smashing experience? A bigot who wants to poke holes in the argument that fat people deserve human rights? A student who’s new to this discussion and is seeking a primer on what diet culture is? A parent who doesn’t want to pass on toxic body ideals to their kid?

Anticipating the needs of another person is an imprecise science for sure, and yet entirely disregarding what might be the reader’s desires or needs isn’t the point of publishing a book like this one. There’s an exchange happening between author and reader that’s very intimate and at its core is a silent contract of mutual awareness: I see you and you see me.

I’m painfully self-aware when I’m being interviewed by big media outlets for the book that some of the stuff I’m saying sounds “extreme” — especially when it comes to some of the big, important questions around “how” and “why” diet culture and fatphobia exist. During a recent interview I found myself going into another head space where I sort of left my body and imagined how I sounded to this journalist as I was explaining the connections between the rationalization for colonialism (colonizers believed they could kill and enslave people because they had a more controlled and — in their minds — superior relationship to their bodies and desire) and the rise of food anxiety in the 1800s. I know for sure that this is not what the person on the other end of the phone was expecting to hear. Most people don’t look to diet culture and see the ripple effects of Manifest Destiny, but I do. And the connections look crystal clear from my vantage point.

It is a leap of faith — and an act of vulnerability — to put ideas and personal stories on the page for someone I do not know at all. And it feels even more vulnerable knowing that there are some people who can (and will) entirely disregard it as conspiracy theory cooked up by a militant and delusional feminist who just needs to get laid — or something? P.S. I am getting laid, so that’s clearly not the solution to my concerns about patriarchy *hair toss*.

To many who have experienced the gruesome reality that is diet culture I know YHTRTRF makes complete sense. To others who are less invested in looking critically at a cultural problem I know the book reads like a misdirected rant.

I realized something last week when I was going into my out-of-body headspace again: American history reads like conspiracy theory goddammit!

As I was thinking about Reverend Sylvester Graham and his crusade to end human sexuality through crackers, I came to the conclusion that I can’t control whether or not someone approaches my work in good faith.

Some of the ideas in my book are ambitious. I make connections between history and the present that are contentious. I talk about the ways that diet culture is part of a process designed to kill women’s spirits. I implore the reader to consider that we are in a global crisis of female unhappiness. This is not necessarily what one expects when they pick up a book about being fat, but this was the truth as I saw it.

And when I started writing the book I brought in one huge intention and marker of success: to tell the truth as well as I could. And I think I succeeded at doing just that.

If you like this article, please share it! Your clicks keep us alive!
Tags
take the cake
You Have The Right To Remain Fat
Virgie Tovar
Body Positive
fat acceptance