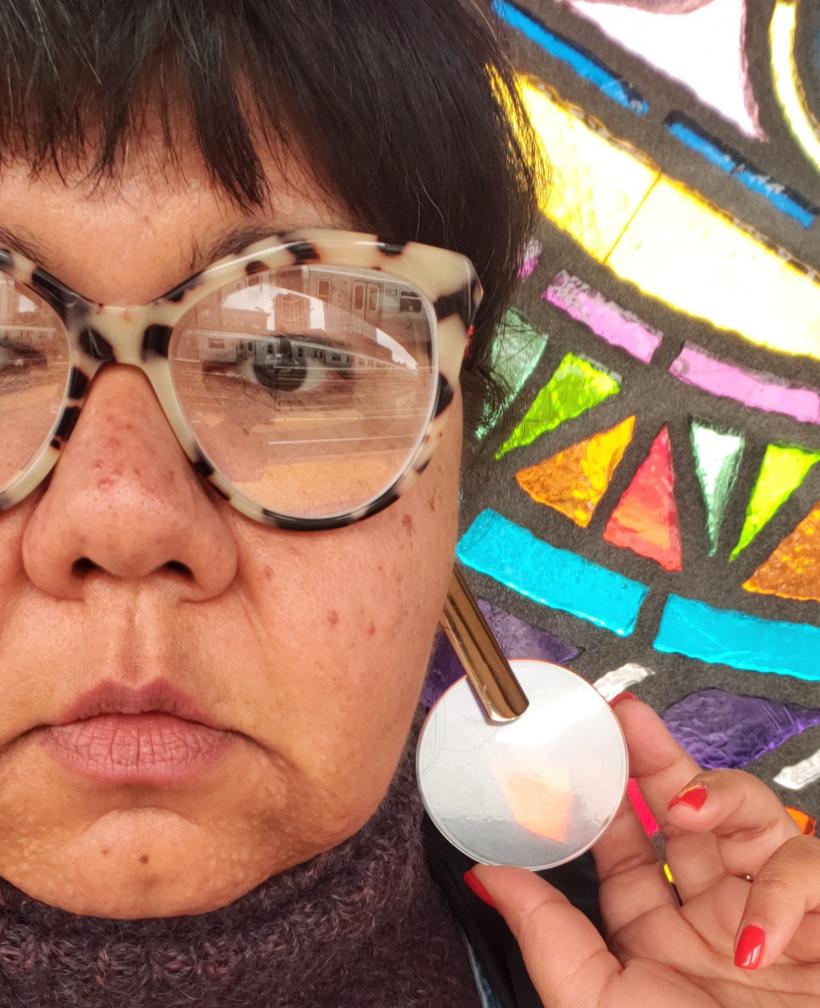 I recently wrote an article about how fat people deal with fatphobia in myriad ways, and how having compassion for that can absolutely go hand-in-hand with having boundaries with individuals who insist on engaging in methods that feel harmful or hurtful. One of the concepts I covered in that article was the difference between “fat-positive” and “fat-negative” methods. A lot of people seemed to find those categories really useful or have questions about them. So, I decided to do a deeper dive on these concepts, and offer a list of examples.

I was introduced to the concepts of “fat negativity” and “fat positivity” when I was a baby fat activist back in 2010.

I learned about them in fat liberation community, in particular the NOLOSE Conference. We used these phrases freely, and at the time they required little exposition. Why? Because anyone who identified as fat and was in fat activist community at that time was pretty much on the same page about what fat positivity and fat liberation meant. The community was small, and that meant new members were likelier to already be on the same page (or were at least excited about getting there) and could quickly be immersed into the language, context, culture and ideology. Further, the concept of “body positivity” as we know it now wasn’t really around at that time, and so we weren’t dealing with the dilution of core concepts.

Because I was already into bread pudding (fat liberation, in case you didn’t catch that) before it was trending, I can’t say that anyone ever sat me down and gave me the talk I’m about to give you.

“Fat-positive” is a phrase that describes behaviors and ideas that promote fatness and fat people as rad, beautiful, stunning and amazing. This phrase promotes the idea that fat people are a natural part of body diversity and human diversity. It goes beyond the idea of weight neutrality, and into — as the phrase suggests — affirmative attitudes. Yes, this phrase includes the idea that there is nothing wrong with fatness or fat people, but it goes farther into asserting that fat people have unique qualities that should be celebrated. People of all sizes can be fat-positive.

“Fat-negative” is a phrase that describes behaviors and ideas that promote fatness and fat people as always mentally or physically ill (more specifically that fatness is an illness or a sign of illness or lack of balance), intellectually or physically inferior, or less attractive. “Fat-negative” attitudes happen on a spectrum, and can go from latent bias to outright abusive behavior. People of all sizes can be fat-negative.

This is how people of all sizes can have latent bias or subconscious attitudes they may not entirely be able to access. Some people are just naturally good at seeing the multiplicity of worthiness and beauty in others. Most of us, however, have to work very hard or deprogram the bias we have been taught by our culture. Most fat people have been taught to have fat-negative attitudes toward ourselves and other fat people. This is how we’ve been taught to cope with fatphobia, which is a very harmful form of cultural trauma. Good news: you don’t have to hate yourself or other fat people! Literally no one benefits from the belief that an entire group of people is less worthy or bad.

You can test whether something is fat-positive or fat-negative by taking one person’s behavior and extrapolating it outward:“If every person did this, would this help to make the world better and safer place for people of all sizes, including fat people?” or “If every person on earth believed this, how would this affect fat people?” Fat positivity creates room for fat people to be seen with full humanity — not as failed thin people, but as complete and precious.

10 Fat-positive methods I love to suggest to not-fat people:

1. Recognize when your fat friends are killin’ it - with their outfit, their professional life or their crafting skills. Take a second to internally (and silently!) recognize they’re thriving against a lot of odds. Tell them they’re killin’ it.

2. Speak out against weight challenges at work.

3. Change your industry standard (especially if you’re in medical care, fashion or beauty).

4. Pay for your fat friend’s coffee if you benefit from the wage gap between fat people and thin people.

5. Date and have sex with fat people.

10. Call or check online to see if a restaurant, bar or theater has accessible seating before you hang out with your fat friend or date.

10 Fat-positive methods I love to suggest to other fat people:

1. Date and have sex with fat people.

5. Don’t take shit from doctors — you know your body best.

10. Understand that you do not benefit from engaging in fatphobia — not even a little!

If you like this article, please share it! Your clicks keep us alive!
Tags
body image
fat positive
Body Positive
#riotsnotdiets
take the cake
Virgie Tovar