Why Are Two Cheating Men At The Epicenter Of The Presidential Election? 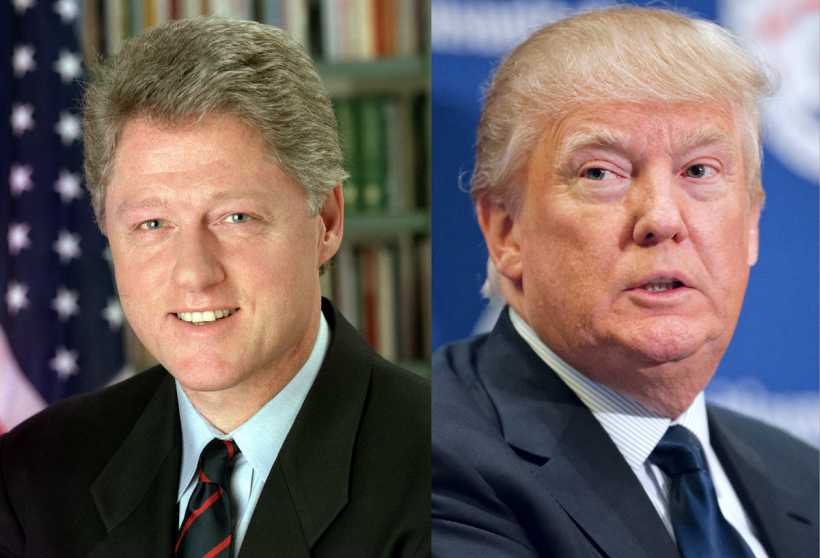 Media scrutiny of the former President and the Republican nominee’s cheating ways have become more contentious talking points than many of this year’s biggest issues.

Sunday night may very well have been Donald Trump’s last chance to appeal to female voters across the nation — a voting bloc that may very well control the fate of the 2016 presidential election — after a leaked audio recording, first reported by the Washington Post last Friday, featured the Republican nominee bragging about sexual assault.

But instead of distancing himself as much as possible from the election’s most discussed scandal to date, Trump played the offense, inviting former President Bill Clinton’s career-long accusers for a surprise pre-debate press conference and attacking his opponent for her husband’s infidelities during his time in political office.

Media scrutiny of the former president and the Republican nominee’s cheating ways have become more contentious talking points than many of this year’s biggest issues: a rising death toll in Haiti from Hurricane Matthew, poisoned water in Flint, Michigan, the daily destruction and bombardment of Aleppo, Syria, sexual assault remaining rampant on our nation’s college campuses through society’s pervasive rape culture, the list goes on. And yet network news organizations and publications have spent the crux of their time, ahead of an important night for politics, revisiting the timeline for President Clinton’s several affairs, instead of his track record as a politician (or his wife’s, for that matter). Journalists focused their efforts on uncovering further details about whether Trump went through with his efforts to have sex with married women, rather than researching his time as a real estate magnate in New York City.

With just about a month left until one of the most important presidential elections in modern U.S. history, the nation is more concerned with two men cheating on their wives than anything else.

Sunday could have been the Republican party’s last-ditch effort to redeem a fledgling nominee, making him seem more presidential and above the fray than ever before. Instead, Trump ostracized, tokenized and demeaned sexual assault survivors. He belittled an accomplished, career politician for her husband’s failures as a partner rather than as a president. Not that it would have made much of a difference if Trump did choose to lambaste Clinton for his own lifetime service in politics. Hillary Clinton is not her husband, and does not need to answer for his mistakes as a man or politician.

But make no mistake: Trump’s staged media fiasco ahead of Sunday night’s debate and threats to jail his opponent are nothing short of what the Republican party has been doing for years.

The Democratic presidential nominee’s platform, proposed policy plans, and the party’s most liberal agenda in modern history was not designed by Hillary Clinton’s husband. It was largely written by the former Secretary of State herself, along with the help of Vermont Senator Bernie Sanders after he lost to her in the Democratic primaries. Trump’s attacks on her husband’s career might have been a better play to capture moderate and undecided voters, though it still would not be a valid debate point against Clinton or her campaign. On the same hand, Clinton’s leaning into Trump’s remarks on women only further distracted voters on Sunday from national issues and global crises.

But make no mistake: Trump’s staged media fiasco ahead of Sunday night’s debate and threats to jail his opponent are nothing short of what the Republican party has been doing for years. Right-Wing leaders have spent millions of taxpayers’ dollars on investigations into Clinton’s use of a private email server, Benghazi, and other public media campaigns against the former Secretary of State, all of which have yet to reveal a smoking gun.

Trump’s spectacle of infidelities, both purported against the former president and those imploding his own campaign, might continue to be the biggest talking point of the presidential election for weeks to come.

But when the dust settles and voters are heading to the polls, our world’s issues will still remain.

The future we want to leave for our children will still be shapeable. Whether we want to continue down this path, or toward one with a dignity and respect that has made America great for so long, will be the choice Americans are making come November.

Why Are Two Cheating Men At The Epicenter Of The Presidential Election?
Chris Riotta