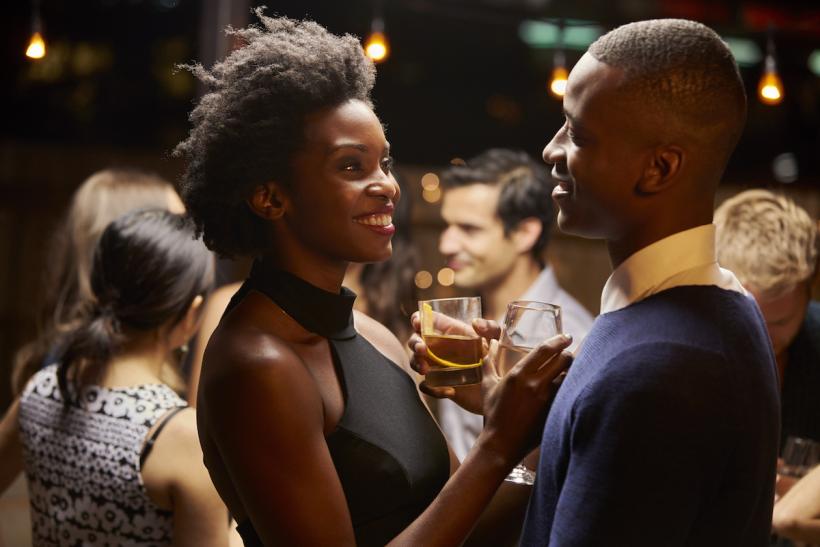 Would you date someone who has a good job, but zero retirement savings?

We’re leaning toward one another conspiratorially on our red lacquered barstools at a swanky Chelsea bar on a Saturday night. It’s our third date — the magic date when, if all the stars align, we might just fall in … something. We’re sipping potently delicious $15 negronis. He’s got on a sharp navy blue J. Crew suit. I’m wearing a $375 white Diane von Furstenberg dress (marked down to $125 at a sample sale, natch). We look like we were born to inhabit this posh land.

But in reality, I’m a broke freelance writer-editor with a solid Roth IRA, and he’s a salaried magazine editor with no 401(k). Both of us are living in deep Brooklyn.

When I ask the 35-year-old magazine editor why his retirement piggy bank is empty, he responds charmingly, “What's the point? I want to live for now. This cocktail is more delicious than an IV as an octogenarian."

To emotionally connect with someone, we need to have open, honest, and vulnerable conversations, even around conventionally “vulgar” topics like money.

I stop leaning toward him and start to cross him off my mental list. I think: This will be the last date we ever have. Get ready to go home and turn on Netflix and sleep by yourself again. And then I realize I'm prejudicial, and I might be lacking all the information.

Raised in the humble, hardworking Midwest by typical immigrant parents, I was trained to scrape together every dollar in savings I could. My parents believed in the American dream, and in the 80s and 90s, it seemed to work. But what’s the incentive (or even ability) to save in the millennial age, when thousands of dollars can be swept away in a Wall Street minute, and millennials earn 20% less than baby boomers did at the same age?

I logged onto Facebook and asked my friend network, “Would you date someone who has a good job, but zero retirement savings?” The response was deafening.

I was asked why I would even ask such a question. I was told by a performance artist that I was saying she was unworthy of love because she didn’t have any savings. A musician wrote, “Offended.” I was told that not everyone has the same opportunities I do to save — which is true.

I worked hard to hold down a 9 to 8 legal job for almost a decade while freelance writing and planning events on the side, but I was privileged to have a college education. I was lucky to have obtained a steady job with benefits that allowed me to contribute a significant monthly sum to my retirement savings. Now, as a full-time freelancer, I see how hard it is to build a financial mountain with paycheck matchsticks, but I’m still diligently using Digit to save small sums every month automatically.

“No retirement savings are an eyebrow raiser, but not a dealbreaker, especially depending on their profession,” actor Sri Gordon says. “I do have some retirement savings, and I am a freelance actor, but it’s certainly not as easy for me to save for retirement as someone who has an office job with benefits, access to a 401(k), company matching, etc.”

But this editor I was dating had a steady job and earned extra money to burn. To me, he seemed like the equivalent of the grasshopper from Aesop’s Fables, who frittered away the summer playing and then found himself in the cold come winter.

Could the grasshopper and the ant ever make a love match, or would they spend all their time squabbling over their monthly Quickbooks budget?

When I posted about this in my secret Facebook group of financially-minded women, they were taken aback. “Never!” one wrote. “Women don’t have the same security and luxuries as men,” another poster wrote. “I might well lose his number,” one woman wrote. Another commenter wrote, “That’s a turn-off and a little boy mentality. That’s living in lalaland, and no one has time for that.”

Laura Lea Brown, a makeup artist, living in New York, says that before she met her husband, she felt it was important to date someone with savings. “I dated engineers, doctors, and a chemist with great-paying jobs. I was afraid to be with someone just like me because I was like, Oh, both of us don’t have degrees or savings? That’s a recipe for disaster.”

However, after meeting her husband, who was in similarly dire financial straits to her, Brown had a change of heart. “The one who stole my heart was the one with a regular job and no savings. Upon opening up to love and getting to know this person, he understands where I come from, so together we will make it happen. I feel confident we will be fine because we are both hard working people who want better lives for ourselves.”

“You can certainly catch up if you start saving in your thirties,” lawyer Alicia Jill Sokolowski says. “For example, I have had jobs that match 150% up to 8% of your total salary. A 401(k) can grow gangbusters under those circumstances. Also, combining households alone can allow for thousands of dollars a month in additional savings. I think saying otherwise is unnecessarily discouraging.”

Another mitigating factor is the uncertainty of everything in a post-pension, Trumpian world. “Consider this: things can change in a heartbeat. Someone with a fancy job and fat retirement fund could lose it all in a downturn, or someone gets sick and racks up thousands of medical bills. It’s great to assess your financial comfort zone for the best-case scenario,” writer Meesha Halm says. “But ultimately, I’d choose a person who I can roll with when the worst-case scenario hits.”

One thing that may cripple our generation in finding a financially solvent and stable person is the prevalence of student loans, a topic that has come to the forefront as of the past few years.

“As a generation, our retirement savings scenarios are likely to look different than the expectations laid out by our parents. Many of us have student loans and/or jobs that offer no matching, etc. Not to say individuals can’t still save within those parameters, but it adds an interesting angle to the question of how we are to judge the financial stability of a generation,” writer Joy Martin said to me.

Em Mahdavian, a dance choreographer and filmmaker, is more focused on property and equity than retirement savings, despite her loans. “It’s not important to me, though my husband and I are paying off student loans and we own a tiny cabin outright. Inflation and volatile economics from things like climate change make me less inclined to value cash than being debt-free with my own land and home (albeit not in the city we live in). As an artist, I live on little and keep overhead low. That probably frightens some, but it’s the trade-off necessary to my work.”

Erica Lies, a comedy writer, knows that many in our generation have trusts and inheritances to fall back on. “What if they don’t have retirement savings, but are going to have an inheritance coming to them?” she asks.

But to me, relying entirely on parents’ money seems not only financially but emotionally irresponsible. To me, it’s one thing to accept cash as a down payment on a house or a little help during hard times, but to depend for one’s entire retirement on an inheritance seems risky since children can get written out of a will.

A British ex-boyfriend of mine once asked why American women seemed like such “gold diggers” (a term I find pretty offensive) on reality shows. I said that American women have less of a safety net than, say, European women, who have greater social security via governmental benefits. Consider the medical support you’ll receive as a single mother under the NHS in the U.K. versus what you’ll receive in the U.S. This is even truer in Trump’s America, with our dear leader already trying to roll back the Affordable Care Act. Living in expensive urban centers like New York may only exacerbate our financial worries.

“Living in New York City is a special situation and what is “normal” for us — living from paycheck to paycheck, 30 percent of paychecks going to rent, no savings — is not normal for any other people in our age group in the rest of the country,” burlesque performer Calamity Chang said to me. “So having said that, I think dating here has its own special set of rules as well.”

Brown has found peace with her and her husband’s financial situation. Now married, she and her husband have instituted a savings plan and are assiduously working toward solvency and prosperity.

Is it possible that my attitude toward those without savings is preventing me from finding a wonderful partner? Can I fly free in dating, a trapeze artist without a safety net, or is that just non-sensical?

I don’t have the answers, but I’m more open and less fearful now than I was before, after talking to friends. I realize that the fear I grew up with of never having enough money to survive (aka #povertyfear) may have held me back from considering more important attributes, like emotional support.

With more and more of my millennial generation flocking to cities, it seems no one has time to consider anyone except oneself financially. To emotionally connect with someone, we need to have open, honest, and vulnerable conversations, even around conventionally “vulgar” topics like money. As my pal Suze Orman says, money is all tied up in emotions, and it’s difficult to separate the two.