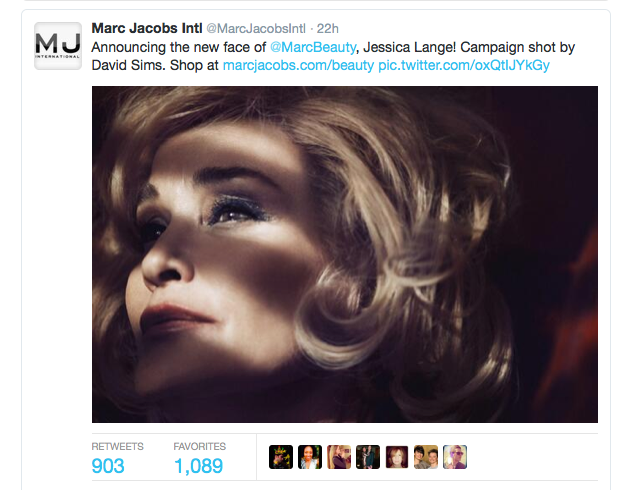 Confession: the thought of aging petrifies me. I’ve been rocking anti-aging face lotion daily since I was 17. With designers using teenagers to strut their style down the catwalk, it’s not hard to see why. Soon enough all designers will start parading actual children on the catwalk.

WRONG! Marc Jacobs announced via Twitter yesterday that the face of their new beauty campaign is none other than fiercely foxy Jessica Lange – who is 64, in case you didn’t know. Even though it was just a Twitter pic (seen above), Marc Jacobs sure nailed beauty for this American Horror Story actress! Jessica looks breathtaking with her bold brow and peachy lip combo. The patterned shadow and smokey eye adds to the sensual nature of the image in a sophisticated manner. This is a picture that says, “I’m 64, not 24. I embrace the beauty in my age.” We just LOVE it!

This isn’t the first time in recent times that a designer has opted for a more mature model. NARS Cosmetics selected 68 year old actress Charlotte Rampling (of Dexter and Swimming Pool fame) for their new line.  Mary-Kate and Ashley Olsen’s line, The Row, featured 65 year old model Linda Rodin in its pre-fall 2014 lookbook. The twins did Linda justice. In virtually every picture she looks regal and sophisticated, but also manages to display a unique intensity. She looks doesn’t look like a politician’s wife –- she looks like the politician.

We’re all for it. Why obsess over youth? It’s such a teensy facet of a long, healthy life. It’s time to shift our ideas of beauty into something that equates experience and maturation. Maybe our daughters will smile when they find their first gray hair.

If you like this article, please share it! Your clicks keep us alive!
Tags
style
beauty
marc jacobs
olsen twins
beauty at any age
designer
trendy
models