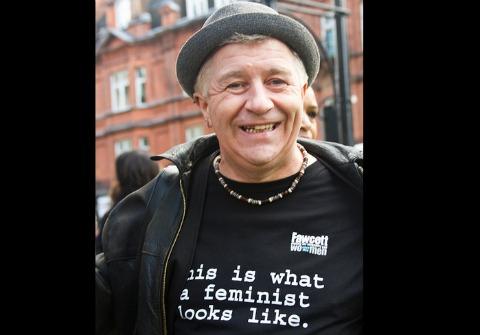 Gender loyalty not only exists (obvi), but we also sort of can't. help. it. Think back to all those boys vs. girls(!) playground games as a kid: you wanted the girls to win so badly just because you’re a girl. Class president election? Better pick Emily over Emilio. There’s just a sense of undeniable loyalty. Females first! But lately we've been digging on a new crop of gender lovin' — welcome to the meteoric rise of male feminists!

Just last night, I was celebrating my lady friend Sarah’s promotion over, errrrr, icy, adult beverages. Selfishly, I was happy to be celebrating a fellow female’s step up in the career ladder instead of a dude’s. My thoughts were echoed by my pal Mike partway through the night, reminding me that women aren't the only ones bolstering women:

The words resonated. In a culture where we’re more apt to blame the rape victim or instruct women on ways to avoid getting raped, it’s refreshing to hear misogynistic perceptions juvenilized. Organizations like Men Can Stop Rape have risen to the challenge of shifting our societal perception on violence against women. When describing the motivation for cultivating the ideas behind Men Can Stop Rape they explain:

Though the majority of violent acts against women are committed by men, the vast majority of prevention efforts are risk-reduction and self-defense tactics directed at women. The founders wanted to shift the responsibility of deterring harm away from women by promoting healthy, nonviolent masculinity.

It’s not just about ending violence—some men are even tacking “feminist” on their list of personal adjectives. John Brougher, founder of MaleFeminists, sparked debate when CNN interviewed him last fall to gain insight on his beliefs. He claims that the word “feminist” is inherently tainted: “for many,” Brougher says, “even just the word itself conjures up images of radical ideology.”

But for Brougher feminism is: “a simple belief in equality. I'm a feminist because I believe that men and women are and should be equal, but we're not treated equally right now,” he explains.

Dude’s got a following too. On Brougher’s site, guest author Dan Arel got bold with his statement:

So am I a feminist? Yes. Why? Because I believe my male privilege comes at a cost and that cost is female equality. I also believe as someone who benefits from such privilege it is my duty to eradicate it.

Because of this ongoing and often systematic inequality, violence against women continues to occur and go unreported; more than half of all rapes in America (54% to be exact) go unreported every year because of the shame and stigma surrounding the victim. The bizarre desire to blame the victim is prevalent in discussions surrounding these incidents; by doing this, we're enabling the rapists and further encouraging a disparity in gender equality.

Ugh. Back to the happy news. Some men rock and are trying to make a difference every day; cheers to that. Here at Ravishly we raise our glass.

If you like this article, please share it! Your clicks keep us alive!
Tags
macho men
male feminist
Men Can Stop Rape
female empowerment
Rape
violence
blaming the victim
not your fault
end violence