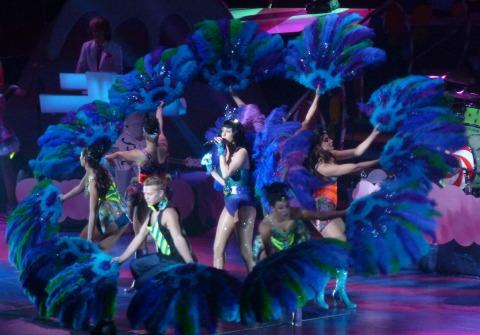 Hate to break it to ya, but you can't just say "sex" and expect your boo to drop trou instantly. There's gotta be some effort people! Similarly, some song writers seem to think that slamming pop stars with gazillion dollar checks to sing a few lines about the horizontal tango will help panties explode across the nation.

Hilariously enough, some of the most unsexy songs ever are about sex. Many eardrums (and souls) were destroyed in the creation of the following list:

7. "Peacock," by Katy Perry
Choice lyric: "I wanna see your peacock-cock-cock. Your peacock-cock-cock"
Wait a second, wasn't this written by an adult and not a fourth-grader?? It's like saying "suck my Bal-zac mom." Prefaceing "cock" with a completely f*cking weird bird reference is not sexy. Why is Katy Perry naming her man's junk after a colorful bird? Listen up ladies: c*m is supposed to be white. Call the doctor if it isn't. Yuck.

6. "Eat You Alive," by Limp Bizkit
Choice lyric: "Once you seep in under my skin / Theres nothing, theres nothing in this world that could wash you away"
First of all, the band's name brings flaccid penises to mind. Fine. But add to that the all-too-common flashbacks of awkward moments ("I just thought you would last longer") and embarrassment ("I just want to satisfy you ... but I can't"). Bad. Bad. BAD! The song itself is creepy—is he a cannibal? Should you give Fred Durst some bacon before boning him? This possessive/obsessive anthem gets steadily weirder as its made clear that the girl in question is largely not into Durst's attraction to her, yet he doesn't care—he's staring and fantasizing anyway, liiiiike a future serial killer.

5. "Sexy Love," by Ne-Yo
Choice lyric: "Just one touch / And I erupt like a volcano and cover her with my love"
La, la, la, Ne-Yo is singing about premature ejaculation. His lady friend touched him JUST ONCE and he j*zzed all over her. Ne-Yo is sexy! If I got him alone and he busted his load on my body before I even had the opportunity to get some, I'd be FURIOUS. Rather than apologizing to the poor woman he left (presumably alone with her vibrator), he just keeps talking about how much he loves the thing she does. Clearly he does! Maybe he should try thinking about baseball or something.

4. "Bubble Pop Electric," by Gwen Stefani
Choice lyric: "My sweet tooth I want your candy / The Queen Of England would say it randy"
Lines like that are a great way to say, "hey, I really need help with this whole rhyming thing." First of all, Gwen is in high school or something because she lives with her parents (who she talks to in the song) so she and 1/2 of Outkast decide to have sex in the backseat of a car. At least, we assume she's talking about sex. She keeps saying "bubble, pop, electric," which sounds more like a Japanese video game than sex. Secondly, the Queen of England would never f*cking say that. We all know she has polite sex.

3. "Gorilla," by Bruno Mars
Choice lyric: "You and me baby making love like gorillas"
Sexy voice. Moody beat. Good flow. What's holding our man Bruno back? A terrible f*cking metaphor. Who wants to be thinking about smelly beasts that eat their own feces when you're trying to get in the mood? Ew! We're definitely going to lock you out of heaven now, Bruno.

1. "Milk Milk Lemonade," by Katy Perry
Choice lyric: "My honeydew and your banana make a treat"
Wait ... are you telling us that melons look kind of like boobs and a banana looks almost like a penis? Consider our minds blown. Katy clearly wouldn't know sexy if it wrapped its hands around her neck and forced her to listen to Nickelback (which is why she's on this list twice). Not only are those lyrics terrible, but the whole song loops that childish rhyme: "milk, milk, lemonade, around the corner chocolate's made." There is NOTHING about childhood that should be running through my mind when I'm mid coitus—especially combined with bodily functions and sweets sung by an overly glorified misfit. Even if Ryan f*cking Gosling played this song, I'd jump out a window before allowing my consciousness to connect it to sex.

Image: penises are not supposed to do that, Katy. Courtesy of Wikimedia