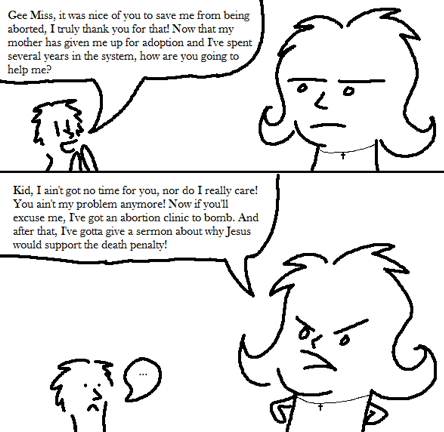 So, we're mildly flipping out about this whole Hobby Lobby thing. It's bad enough that a giant—yet friendly—corporation is fighting for the "right" to deny contraceptive care to their female employees, but (as we previously discussed) the case is about far more than throwing anti-fetus meds to lady folk; Hobby Lobby's reactionary diatribe has the potential to strengthen corporate power. And while it may seem batty to argue that a corporation is a "private citizen"—and should be free to act as such—wording is everything.

Despite all odds, this gray hair poppin' case has taken a surprising turn. At the risk of completely jinxing everything, this recent evolution doesn't look good for Hobby Lobby. At all. First pump.

Here's the lowdown: Hobby Lobby's main beef with the Affordable Care Act's requirements were the intrauterine devices (IUD) as well as Plan B and ella (a type of Plan B with a longer window of time), which they feel aid in abortions. Not so, clearly. Perhaps this argument's inherent dubiousness has become increasingly obvious to Hobby Lobby as well. Waaaait for it!

New evidence shows that Hobby Lobby's 401(k) retirement plan has holdings over $73 million in mutual funds with investments in companies that make these very products. Oh, and companies that produce drugs that are used in actual abortions. Naturally, Hobby Lobby made matching contributions too.

Other holdings in the mutual funds selected by Hobby Lobby include Pfizer, the maker of Cytotec and Prostin E2, which are used to induce abortions; Bayer, which manufactures the hormonal IUDs Skyla and Mirena; AstraZeneca, which has an Indian subsidiary that manufactures Prostodin, Cerviprime, and Partocin, three drugs commonly used in abortions; and Forest Laboratories, which makes Cervidil, a drug used to induce abortions.

Several funds in the Hobby Lobby retirement plan also invested in Aetna and Humana, two health insurance companies that cover surgical abortions, abortion drugs, and emergency contraception in many of the health care policies they sell.

Best of all? The documents that reveal this were filed three months after Hobby Lobby filed their lawsuit. Geez, what's that word? You know, the one that sounds like a giant nostril-ed animal that dwells in shallow water but also means "deceiver?" Oh right: hypo-crite.

This is all fine and dandy, but it also reminds us why this case is so unsettling. This is exactly why corporations can't be treated like private citizens. Besides wielding unholy amounts of power, corporations have their hands in too many places. There are too many connections, alliances, investments, employees, policies etc. to unite under a single front; I mean maybe we're oversimplifying things, but couldn't they have asked for a handy spreadsheet of companies they were investing in?