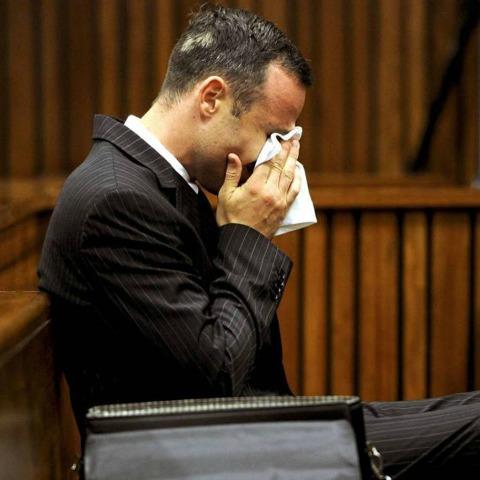 Hopefully you know by now to run for the damn hills when you hear these pitiful 'woe is me' lines. We're not sure what Oscar Pistorius said to Reeva Steenkamp on the matter, but sadly, she wasn't lucky enough to ditch him before meeting her violent demise. Alright, Pistorius hasn't been found guilty yet, but regardless, his 'it was an accident!' defense doesn't exactly paint a picture of a noble man anyway. Blindly firing through a bathroom door in the middle of the night because you heard a "window open" isn't too rational. Or sporting.

Further condemning Pistorius is a tasty bit piece of evidence from his ex-girlfriend, which just surfaced on Twitter. Briefly. And in a way, that's even more telling. Samantha Taylor (Pistorius's ex) has already gone on record stating that Pistorius not only has anger problems but a major crush on his gun. According to Taylor, Pistorius had his gun on him at all times and even fired his gun through the sunroof of his car following a confrontation with a cop. And no, it wasn't just the trigger-happy vibe he exuded, although that's terrifying enough. Taylor also alleges that Pistorius screamed at her frequently.

And she ain't ready to be silenced yet. While Pistorius was testifying earlier this week, he rambled on about how much he loved Reeva and how generally amazing-sauce their relationship was.

The post was deleted shortly after, but given that Taylor has expressed fear of Pistorius this move actually makes sense. Not surprisingly, her message got over one hundred retweets and the internet was more than eager to discuss her not-so-cryptic message.

Sometimes the exes know best. They've seen the person in question at their best and worst. Both are invaluable in determining character, or possibly guilt. We're stoked that Taylor has spoken up, but are crossing our fingers, toes, ankles, arms and otherwise that she doesn't end up 6 feet under for her bravery.

Image: Your tears don't faaaaaaaaall, they crash around mehhhh. Courtesy of, Facebook