Why it was Stupid to Obsess over Monica Lewinksy, Like Ever 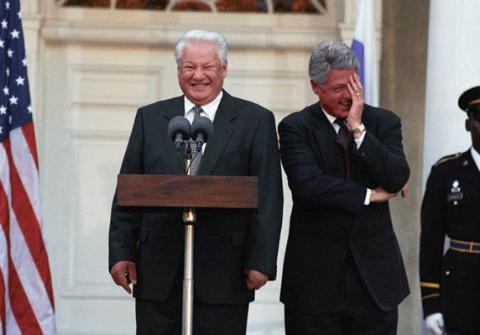 Not going to lie, we were pretty stoked when we saw the headlines boasting Monica Lewinsky's great reveal to Vanity Fair. What would she reveal? Semen stains, berets and Linda Tripp oh my! This was bound to be the story of the year!

Then . .  the non-juicy interview revealed, meh, nothing interesting: it seems that Lewinsky is a normal woman who made some mistakes in her youth. Why did we ever care?

I, for one, have a clear memory of former president Clinton's impeachment trial despite the fact that I wasn't even in double digits when it began. That fateful January morning started embarrassingly for me. It was well known amongst the 4th graders at my school that I belonged to the house of unpronounceable Italian food and mega health conscious teacher parents. I was determined to change that reputation and make myself the best slumber party host. As my best friend Chelsea (who is some how still my best friend) and I scampered to the TV—ready for a morning of cartoons—we were startled to see my parents already watching the trial.

"Girls," my ultra liberal mother began, "sorry, but you have to watch this. This is history."

It was—at the time. Watching a president endure an impeachment trial with a set of adults who remember the Nixon fiasco was memorable, to say the least. Oh, wait a second, didn't Nixon actually commit a crime? What was Clinton's philandering ass doing up there? Because we were about 9 (and my friend's name was Chelsea) much of our attention was focused on Clinton's family and how they felt about it. But we were confused: wasn't this a private matter that should have been solved over an awkward dinner table fight? Sure, lying under oath is bad—but why was he even asked? As rabid Hillary lovers, we're not advocating cheating. Especially on her. (Then again, how could we ever actually know what their relationship is actually like.)

Slate interviewed a trazillion (yes, we counted exactly one trazillion) others who were around my age when the event occurred to determine its effect on Millennials. Their assessment?

In light of everything that has happened since—Bush v. Gore, 9/11, the Iraq war, Hurricane Katrina, the financial crisis, Barack Obama’s election—it obviously seems silly in retrospect. But more than that, it seems completely irrelevant as anything other than nostalgia fodder. Rehashing Lewinskygate is rightfully seen by young people as an unnecessary wallowing in a kind of historical embarrassment and curiosity.

What a giant, steaming pile of "DUH!" You know what else happened in 1998, when this whole drama was brought to light? A scary ass ice storm nearly destroyed our northern neighbors, Quebec and Ontario. Oh, and then a hundred people were killed in a deadly massacre in Algeria. Hell, Elton John was even knighted! Shall I continue?

Regardless of the hype's motivation (money and scandal are always strong plays in political chess), the psychological—and moral!—chord it struck within the American psyche seems to still resonate depiste the fact that we know, deep down, it's all a bunch of baloney. It's no secret that we're sex obsessed, but for the love of torn families and silly interns—let it rest. Focus on real issues. You know, like the still-harrowing aftermath of 9/11 and the still-roiling Iraq war.