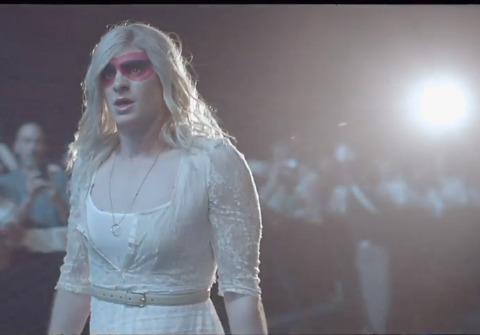 Arcade Fire never disappoints, and the new music video for "We Exist" is basically the coolest short film ever. Why? Oh sweet friends, let me tell you: not only does it star the latest Spiderman—Andrew Garfield—as a gender-confused dancer, but the climax of the video was filmed in front of the band's fans at Coachella. Nice personal touch!

Garfield delivers an amazing performance, despite having no spoken lines. Frustration and fear are evident in his tortured face as he struggles with his trans identity, at first privately, then in front of an army of haters. When things get rough at a dive bar (which, surprisingly, lacks an offensive Confederate flag), the video morphs into an escapist fantasy. The words "we exist" reverberates across the cacophony of Garfield's misery. We watch him dance ecstatically as he is accepted and learns that there are others like him. Transcending further into the realm of fantasy, Garfield finds himself walking onstage to join Arcade Fire at Coachella. The crowd cheers. Garfield is accepted—no, celebrated. The video never snaps Garfield out of this vision.

The whole thing is so beautiful that we were stunned to silence by the end of it. The intimate journey hits close to home for anyone who has ever felt "weird" or like an outsider. Plus, bringing in the cheering Coachella crowd and making the band's fans part of the experience was brilliant.