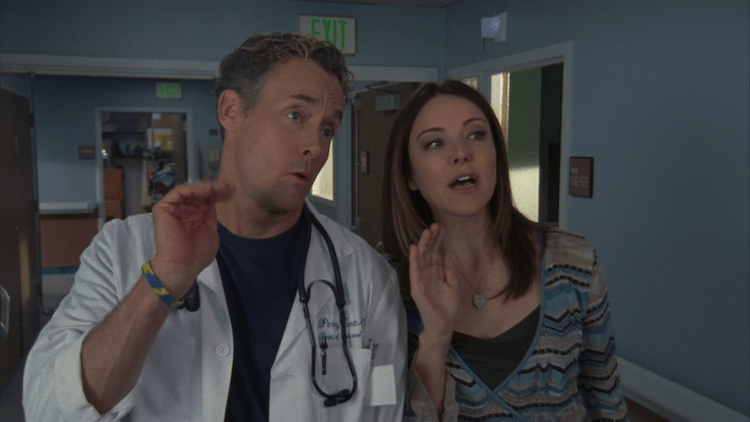 Ah, studies. They always tell us the craziest things. Case in point: New findings published in the Psychology of Popular Media Culture reveal that people who enjoy TV sitcoms are less likely to believe in romance. Those who binge on rom-com films and "marriage focused reality shows" are down for romantic idealism—but sitcom lovers just can't hop on the love bandwagon.

Maybe the creepy laugh track is a turn-off?

Time for a stats 101 lesson: Correlation does not imply causation. An episode of Modern Family probably won't make an otherwise hopeful romantic cry into a pint of Haagen Dazs while cursing the cruelty of love. People who dig sitcoms are likely drawn to them because they often mock conventional romance.

Any Scrubs fans in the house? Jordan and Dr. Cox (aka Perry) are the perfect example of this. They bicker, tear each other down, tell extravagant lies and are generally awful to each other. But because it's a TV show, these interactions are basically foreplay for them. They still love each other and, well, "end up" together. Cynical viewers may be drawn to this volatile relationship archetype, using it as "proof" to confirm pre-existing ideas about love.

At the end of the day, we all have different perceptions of love and romance. So watch whatever shows you want—just know that sitcom conceptions of relationships aren't always the healthiest to emulate in real life.