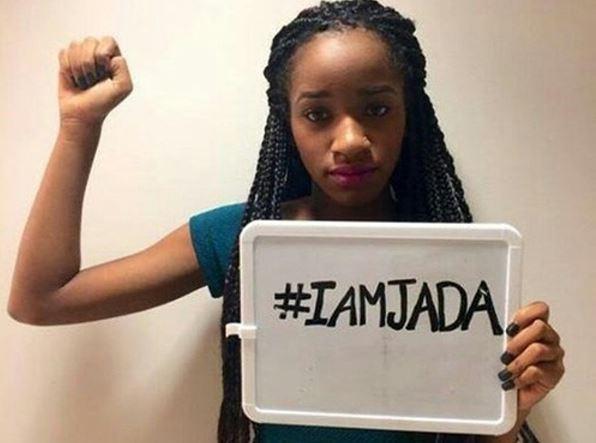 One week since Jada’s rape went viral as a meme, the horror rages on—but so does this remarkable teenager’s incredible bravery. And the conversation she’s sparking with her new #IAmJada campaign is just what we, as a society, need.

First up, the horror: Reports are emerging that Jada’s friend was also raped the same night Jada was. And, according to Jada’s spokesman Quanell X, this other victim might be one of many—all of whom are receiving the same stomach-churning social media treatment:

Oh, and then there was that Houston-area rapper who riffed on the sick #JadaPose trend.

And while the police have yet to make an arrest in any of the cases, Jada and her family continue to take a stand. In an interview with Ronan Farrow on MSNBC, Jada’s mother Sukieda spoke about learning about her daughter’s violation, which rendered her wordless: "Nothing I could say. All I could do was just hold her." On Jada’s stance to not back down, Sukieda said it’s because similar events have “happened all around the world” and her daughter “wanted to make a difference.”

How The View Blew It

Which is why, despite no doubt experiencing what must be unthinkable trauma, Jada valiantly agreed to be interviewed on The View. And why it’s an epic shame the hosts completely shit the bed on her. From Whoopi Goldberg to Jenny McCarthy to SuChin Pak and Meghan McCain, all the interviewers appeared uncomfortable. This in and of itself is somewhat understandable given the trauma Jada's faced. But the most SuChin Pak could offer up was "That's a very plausible story. That can happen at parties”—as if this statement were somehow helpful in any way.

As for Whoopi, she adhered to her stance: "The law will take its course. The law must take its course” . . . which is both vague and totally misses how the law so often fails rape victims.

Finally Jenny McCarthy finished the segment with an anemic: "Parents, have a conversation with your children."

Taking a Stand For What's Right

Here’s the thing. That interview was garbage and completely unworthy of the stunning fortitude Jada’s repeatedly shown in the face of atrocity. There was an opportunity for real dialogue and an examination of one of our country’s greatest ills—straight from the front lines. It was an opportunity completely squandered, which is what makes McCarthy’s lame sendoff so ironic: A real conversation on these issues is just what this country needs.

We need, as a society, to take a cue from Jada, fortify ourselves, and really reckon with this issue. We need to openly and rationally address our nation’s seriously huge issue of rape—perpetrated against women, against men, against people who are gender non-conforming.

We need to discuss how this violence manifests itself within different communities (e.g., studies show that between 40 and 60% of black girls have been sexually abused before the age of 18—and are far less likely to report rape than white women), and look into the insidious historical and social forces behind it.

We need to delve head first into examining what consent is and what it isn’t. We need to focus on the toxic masculinity that pervades our culture and how it gets perpetuated. We need to examine what healthier masculinities look like—and how they serve us all.

For as Jaclyn Friedman points out: “Rape doesn’t just harm one person. It tears at the fabric of our communities.”

With #JadaPose and all consequent slut-shaming and victim-blaming, our community is getting torn up. Pretending we don’t have a problem with sexual violence or just saying that “girls shouldn’t drink” is not the answer—in fact, it’s the direct path to more Steubenvilles, more Jadas, and the continued suffering of survivors who, in this toxic climate, remain silent.

The horror Jada suffered during and in the aftermath of her assault is devastating. But so are all the ways our society is letting her down. It’s sad that a 16-year-old, who’s suffered some of the worst pain a person can experience, has to stand up for survivors and create the dialogue we so desperately need—while the talking heads on TV can only offer up meaningless platitudes and awkwardness.

This is why we #StandWithJada.

If you like this article, please share it! Your clicks keep us alive!
Tags
Jada
Sexual Assault
The View
#JadaPose
#StandWithJada
Rape
consent