Blow The Roofie Off This Joint 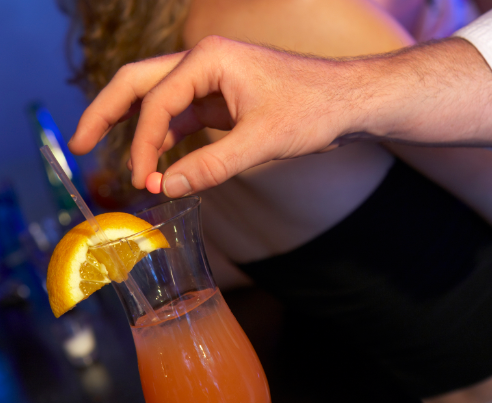 Look: Nobody’s saying that a manicure that changes colors isn’t the dopest shit ever—this technology is of prime pertinence to femme dykes like me. For certain reasons that is.

When said manicure change happens because a roofie is detected in a drink, it seems especially dope—and especially difficult to understand why people are so critical of it and similar protective measures (like these straws). Who wouldn’t want the chance to prevent their rape, am I right? Yeah, you’re right.

But that’s where your intent isn’t accurately coalescing with the reality of rape prevention.

Such snares (albeit clever) persist in putting the responsibility of rape prevention squarely on the shoulders of women, as it has been forever. And fingernails that change color don’t allay the burden of carrying such a weight around.

They also don’t really work. Per a government study, gamma hydroxybutyrate acid (GHB) was only detected in 3% of rape kits. When you eye a straw or a fingernail to see if it changes color, you look the other way on the much greater hazard at hand—alcohol—which is present in almost 70% of rape kits.

This isn’t a plea for temperance. Alcohol, like physical strength, charisma, lots of money and a huge fan-base, can be a largely innocuous variable. It is only when said variables are employed and manipulated to facilitate a scenario where you can “power through” someone’s nonconsent that they become tools, weapons. By focusing on how much a woman has had to drink, we emphatically obfuscate the root of sexual violence: a culture that condones and enables sexual violence.

Cee Lo’s blatant unrepentance for date raping a woman conforms to our societal conditioning about rape—that it’s only something certain kinds of men do. He’s famous. Powerful. Black. A man who clearly hates women. We latch onto this sort of narrative because it comforts us. We’re not doing anything wrong. It’s not our sexual education system or sexual violence resources that put the onus on victims alone to prevent rape. It’s just those kinds of men.

In a 2009 study, 1,882 male college students were given a list of questions designed to self-report sexual violence. In answering these questions—which had pointed and specific phrasing like “Have you ever had intercourse with someone by force or threat of force?”—120 men self-reported as having committed sexual violence.

Only 44 were one-time offenders, and the remaining 76? They owned up to a combined 439 successful or attempted rapes.

Now, I’m not suggesting that there is a unwritten conspiracy amongst the menfolk to propagate this cautionary tale of the amateur pharmacist lurking in every bar as a means to displace our attention from men who stick to old-fashioned (and demonstrably more common) tactics of “honing in on the drunk girl.”

What Do We Mean When We Say, “Rape Culture”

Anthropologists are not living amongst rapists to learn and appreciate their ways. We know there’s no rape embassy with rape diplomats who sustain rapist-American relations. That is not what we mean when we talk about rape culture.

But as the aforementioned study suggests, most rapists don’t self-identify as rapists, even after multiple rapes. This is the danger of peddling a broken record about the kind of men who rape, even in the face of damning demonstrable evidence that there’s no such thing.

When women are given a veritable utility belt of rape prevention gadgets, but we don’t teach men the basics of what attaining consent actually looks like—we allow rape to happen. When we scroll past a woman losing her job for reporting sexual harassment or a school refusing to discipline a rapist and shrug it off as an unfortunate but ultimately private matter, we allow rape to happen.

That is rape culture.

Praytell, what do you expect to happen when a woman’s manicure tells her she’s been roofied? Do you think that whoever roofied her 1) would admit it and 2) could be proven in a court of law to have done it?

Did no one, in your testing phase, suggest that instead, bar patrons would likely tell her she shouldn’t have been wearing a dress that short if she didn’t want that to happen, and hey, maybe she just did it herself. You know like 90% of rape accusations are false anyway, right?

Now this woman is looking at her hands, at this troubling marker that she has been deemed “easy prey.” A mark that won’t come off until she soaks her trembling fingers in acetone.

A mani that changes color is nice, but the real trick would be to overturn our centuries of victim-blaming conditioning with just a little chemistry.

More complicated still is the societal assumption we make that only men can rape. How does all this effort and technology into straws and nail polish—shit men are socially conditioned to associate with effeminacy—afford male victims space to engage a dialog about rape detection and prevention?

Again, the roofie scenario only represents 3% of acquaintance rape. All of this is a lot of work to avoid having to keep an eye on that guy getting too close and handsy with a woman who is clearly intoxicated and doesn’t seem to know him too terribly well.

The awkwardness or social anxiety around calling someone out in public seems un-traversable by mortals, but it is assuredly more effective and free. (You won’t get a thesis from it though, unless maybe you call him out in iambic pentameter and then hand out cut out snippets from Das Kapital to all the witnesses.)

Now: For a little less money and fewer critical articles on feminist blogs, you could spearhead resources that encourage people to watch each other’s drinks. Or make a fuss to have whatever TV show or book The Pickup Artist is behind these days taken out of public view. Or sway liquor advertisements to publicly reproach taking advantage of drunk women the way they have drunk driving.

Am I suggesting we effectively brainwash ourselves to be more proactive about intervening in sexual violence? Maybe. Behavior is conditioned and condoned through the approval—both explicit and implicit—of our peers.

And say what you will about my rattling the cage with social justice buzzwords and wanting to use propaganda and advertisement to convince people to culturally disallow rape . . . but my platform does not encourage or enable irreparable trauma that never leaves your mind.

In the end, I’m not afraid of those kinds of men. I’m afraid of you looking the other way. When you see someone cutting off a woman’s exit path, when you’re presented with facts that all this date rape science doesn’t actually work and you do nothing—you’re a greater threat to me than this 3% probability.

Don’t be that kind of man.