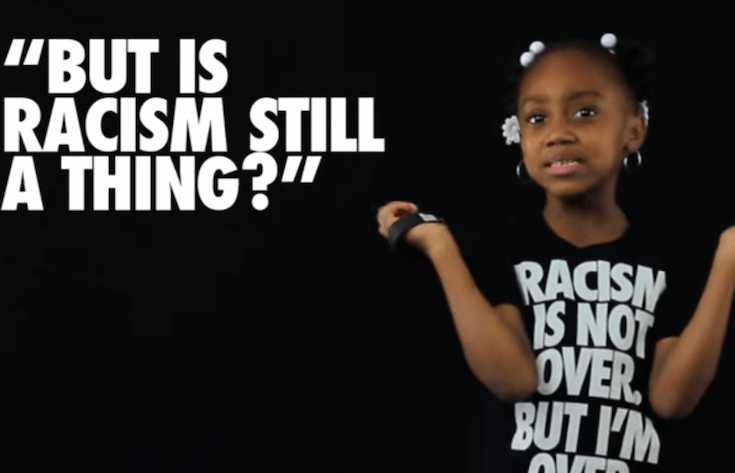 Do you ever hear people say, "is racism still a thing?" (and then, of course, promptly cringe/beat your head against the nearest wall). If no, please tell me where you live so I can join you. Even in the progressive Mecca of San Francisco, I still hear this debated (mostly in the Marina district). And this ignorant query isn't uttered just by out-and-out racist assholes—often, it's just your average privileged person, sheltered from having to face the grim realities of our racist nation.

Enter: FCKH8 with their new video seeking to “educate white America about the racist reality in 2014.”

It's time to smash some perceptions, y'all! In this trending video, produced by social justice-oriented T-shirt company FCKH8 (of LGBTQ rights fame in the late '00s), kids from Ferguson (town where unarmed teen Michael Brown was killed in the street by a white cop) address racism. Talking about racism makes you feel uncomfortable, fellow white people? "Try being black," one kid exclaims. All the children are wearing matching shirts that read "racism is not over, but I'm over racism" in stark lettering. It's a promo for the sale of these shirts, the proceeds from which go to the National Association for the Advancement of Colored People (NAACP), Urban League of the Metropolitan St. Louis, Crossroads Anti-Racism Organization and Training, and a memorial fund for Michael Brown.

Racism, as the kids will break down for you, is still very much an issue that plagues our society—and just because you may not always see it, or recognize what you're seeing, it doesn't mean it isn't all around. Watch the video, and pass on the awareness.