MacArthur Foundation Confirms Something We Already Knew: Alison Bechdel Is A Genius 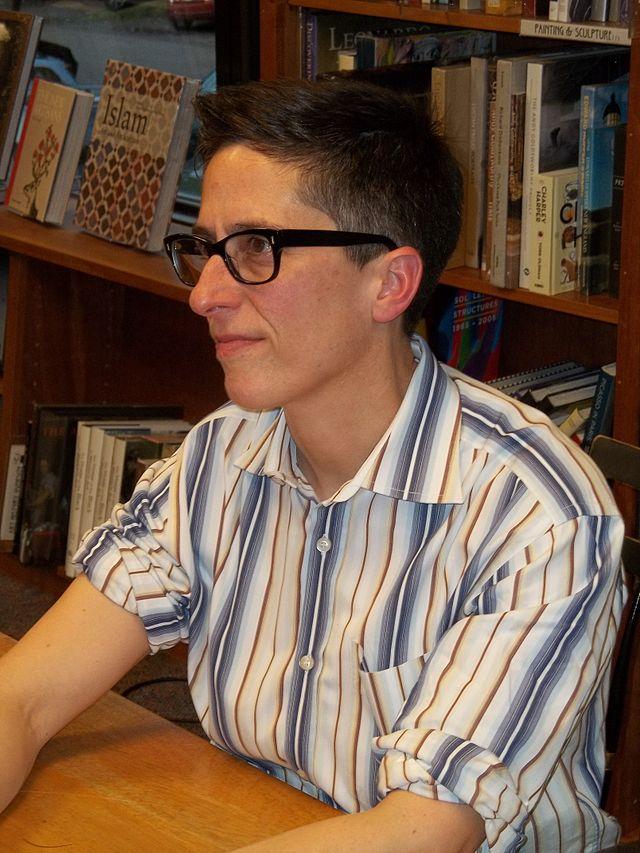 Hot off the presses: The 2014 MacArthur "Genius Grant" Winners have been announced! And it's quite the array of winners, from a labor organizer to a historian to a poet and a physicist. And though we're pretty stoked about all 21 of them—special hat tip to Bay Area-based professor and lawyer Jennifer Eberhardt, who researches racial stereotypes and crime (!)—there's one winner who's definitely captured a little bit more of our hearts than the rest: that badass, gender-in-film revolutionizing cartoonist Alison Bechdel. But before we dive into our undying love for this woman, let's recap what this genius business is about, anyways.

Background On The Grant

The John D. and Catherine T. MacArthur Foundation, which awards the grant, more broadly "supports creative people and effective institutions committed to building a more just, verdant, and peaceful world." And part of the way they do it is to give out this triumphantly kick-ass award every year—which comes with a hefty $625,000, to be spent any way these geniuses see fit. And given that many of them are of the starving artist variety, we're all about that.

The awards have been doled out annually since 1981, with the accompanying six-digit award prize distributed over a five-year span. With this year's additions, the total number of recipients tops 900.

What makes all this genius-awarding even cooler? The selection process is shrouded in secrecy; there are no applications. Instead, an anonymous group nominates people to the foundation's board of directions and then BAM, one day (today) 21 people are dubbed geniuses and get a giant pit of money to roll around in. (OK, so it's likely the funds are awarded via check, but we prefer the other visual.)

So why the maniacal excitement over Bechdel's win? The short answer: She is awesome. The more elaborate answer: She is awesome for having revolutionized the way our society thinks about gender in film—among many other notable achievements. She, as the name might imply, birthed the Bechdel Test back in 1985 in her comic strip "Dykes To Watch Out For" with a strip titled "The Rule." As we've written about before (when discussing all the gross ways Hollywood fails to represent our society), the Bechdel test is beautifully and brutally simple. It boils down to three rules designed to determine not even gender parity, but whether women are being included in a movie in a meaningful way. For a film to pass, the answer to all of the following must be "yes":

1) Does it have two female characters?

3) About something other than a man?

This pretty bare-bones test has made the leap in recent decades from feminist circles into the mainstream—and thank goodness because [expletive] do we still need it. Despite FiveThirtyEight's Walt Hickey establishing that films that pass the test make significantly more money (surprise! Women have their own cash monies and like seeing themselves represented on the silver screen), last year only 15% of the top films highlighted women in leading roles. And women, despite (friendly reminder) making up 50% of the population, earned only 30% of the speaking roles. Of all the movies out there.

Just imagine how few of us would be visible or speaking in movies were it not for dear Alison's incisive and wildly popular test on the issue.

And let's not forget the Genius (capital "G" as of today) cartoonist's multitude of other interesting and inspiring projects. Like the sketchbook about an old fling she published this summer for the New Yorker that begins:

“I once had a lovely affair with someone who was kind, beautiful, smart, interesting, sane, and available. I broke it off after a few weeks.”

Then there was her graphic memoir Fun Home: A Family Tragicomic, which delved into Bechdel's coming out to her father—and her father's suicide a few months later. Slate dubbed the memoir's play adaptation, Fun Home, as the "first mainstream musical about a young lesbian."

Currently, she's kicking it in Umbria, Italy at a castle (we told you she was made of win), experimenting with a giant roll of white paper. She's using it to explore life-size drawings in charcoal—many of them featuring her in various yoga poses.

So glad MacArthur has recognized something we long have: Alison Bechdel's genius. We hope you enjoy your giant pile of money in your castle, lady.

If you like this article, please share it! Your clicks keep us alive!
Tags
Alison Bechdel
MacArthur Foundation
Genius grant
Jennifer Eberhardt
Bechdel test
Dykes to watch out for
Hollywood
gender
gender parity
women in film