Roger Goodell Finally Announces What The NFL Will Do In Wake Of Domestic Violence Scandals—But Is It Enough? 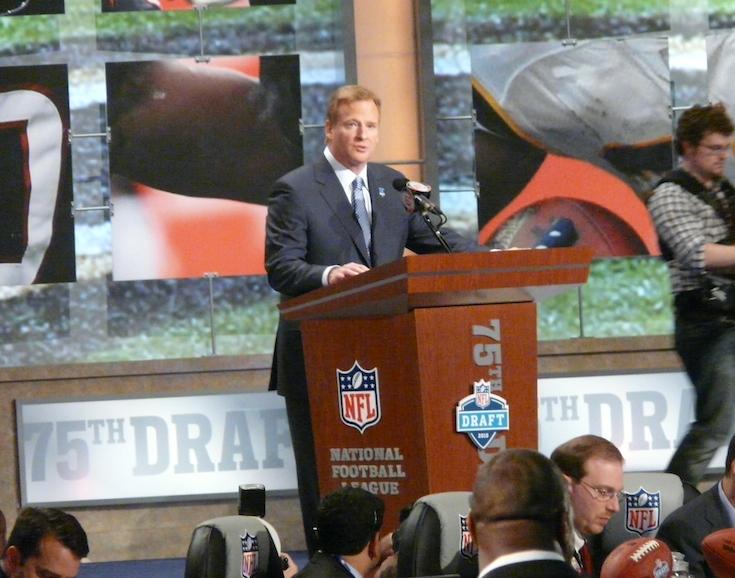 Football lovers, and all fans of not abusing people, have been waiting with baited breath on the answer to this question: How will NFL commissioner Roger Goodell react to the mounting abuse scandals plaguing his league? The harrowing videos and pictures documenting Ray Rice and Adrian Peterson's violence left us questioning the NFL's moral toughness, if not its physical force. Is profit truly more valuable than the safety of players' loved ones?

It seems only fitting that Goodell's response (after over a week of silence) would involve money. And so, it has. Today, Goodell announced that the NFL will donate funds to provide the National Domestic Violence Hotline with 25 more employees to assist efforts. Plus, all 32 teams will undergo some type of training and awareness program to educate and prevent sexual assault and domestic violence. Goodell also promises to support (publicly and financially) the National Sexual Violence Resource Center and its program Loveisrespect, a texting hotline.

Is this a good start? Yes. And personally, I'm particularly pleased about the educational efforts. Abuse is a cycle, and—as many have pointed out in Peterson's case—ignorance and sheltered perspectives can abet the violence. Sometimes, abusers don't even realize that they're abusers; many even see themselves as victims. Abuse training is a proactive and potentially powerful way to combat future atrocities. I think we can all agree that we'd rather the abuse never occur in the first place, rather than punish the perpetrator after it has.

Unfortunately, this is only a start. The sincerity of Goodell (and NFL coaches—we're lookin' at you, Broncos) will be proven or disproven the next time a player commits an act of violence. It's one thing to wait a week and retroactively make good. It's another to take an immediate stand that makes it clear domestic violence will not be tolerated—now or ever.

Since this piece was written, Goodell has held a press conference. Sadly, it sucked. Even NFL players were disappointed. Tedy Bruschi, former linebacker for the Patriots, was particularly horrified (even compelling me to like the Patriots a little more—never thought I'd say that). On ESPN, Bruschi said:

"As long as Roger Goodell is leading the NFL and he's the face behind the shield, you will have the same emotions you had today watching this press conference. Listening to him speak in circles, wondering, 'Man, what is this guy talking about?'

So as you continue and move forward and Roger Goodell is the commissioner, you will continue to feel that way every time you see him. In my personal opinion, being a former player that spent 13 years in this league trying to the the right thing, I want a new commissioner to lead my league. I want a new commissioner to go out there and say the right things and be that leader because right now, Roger Goodell is not that and I don't think he can ever be that.

Roger Goodell needs to step down and move on."

Not only that, but Goodell emphasized the need of an "investigation." Um, how hard is it to admit that you had poor judgment and you plan to change? Shame, Goodell. Not only that, but domestic assault is punishable by a six game suspension. Really? What message does that send young people—beating loved ones gets you a slap on the wrist?

Earlier we (okay, it was me) said that Goodell's future actions would determine his sincerity. This is not a good start.