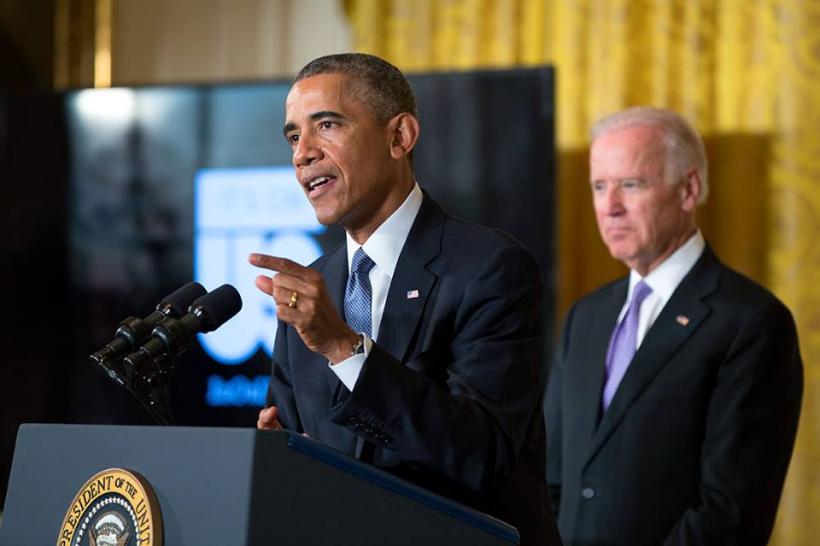 The White House rolled out the “It’s On Us” campaign—the Obama Administration’s brand-new initiative to curb sexual assault on college campuses—on Friday. Both President Obama and Vice President Biden spoke as a part of the launch, with Obama saying, “It is on all of us to reject the quiet tolerance of sexual assault and to refuse to accept what’s unacceptable.”

The campaign comes with a super nifty website, which encourages people to take the “It’s On Us” pledge (and allows one’s social media avatar to reflect said taking of pledge). And there’s a PSA chock full of celebrities speaking about sexual assault—including Jon Hamm and Kerry Washington.

Let me be clear as day about this: I love that the administration is giving this issue such attention. Seeing Obama say, "As far as we’ve come, the fact is that from sports leagues to pop culture to politics, our society still does not sufficiently value women. We still don’t condemn sexual assault as loudly as we should. We make excuses. We look the other way. The message that sends can have a chilling effect” makes me want to fist pump until my arm goes limp.

And the sprouting up of all those Twitter avatars of people who’ve taken the “It’s On Us” pledge? All those shows of solidarity and support? My heart is assuredly warmed. Seeing "it's on us to create an environment in which sexual assault is unacceptable and survivors are supported" getting bandied about? YES. All of the yes.

There’s a lot that’s tremendous about this campaign. And, I’ll reiterate, I love all the attention it is garnering this profound issue. But the initiative has been needling at me all weekend. Something about it is . . . not quite right.

And it's this: Nowhere in the campaign are rapists—you know, the ones who perpetrate these heinous crimes—actually addressed. This may sound totally basic but no one took the opportunity to say, “Hey, hey, everyone. Don’t rape.” Implicitly, I suppose, rapists are condemned through the wide condemnation of sexual assault.

But the problem is this very implicitness. Like, why are we not telling people not to rape? Why doesn’t this campaign address those who are at the root of this terrible phenomenon—at the heart of the 1-in-5 women statistic?

I’m not arguing that all serial rapists out there are going to hear a PSA of Obama saying “hey quit raping” and be like, “OHHH OK, yeah now I’ll stop.” But by not directly addressing rapists, they remain this amorphous, unspoken presence—the unknown stranger.

As anti-rape activist Melissa McEwan points out in her incisive post (that I hope is widely read) about the campaign on Shakesville:

"To write rapists and potential rapists out of the messaging, to fail to include simple and straightforward language like, "It's on us to not rape other people," the campaign suggests that rapists are outside of us, other than us, strangers lurking in the dark and waiting to harm us. This, despite the fact that a woman on a college campus is more likely to be assaulted by the friend who walks her home than the proverbial stranger who jumps out of the bushes."

Time To Put The Blame Where It Belongs

This is a massive problem. Because solidarity with survivors of sexual assault is crucial—as is a reduction in victim blaming bullshit. So while I’m glad Obama and Biden are on the team of looking out for survivors, the “it’s on us” message doesn’t actually place the blame where it belongs—on rapists. And while Obama is smart and right to identify tools we can use to make ourselves aware of sexual assault and the kinds of situations it happens in, by not calling out rapists explicitly and failing to identify them as people-y perpetrators, sexual assault remains this hazy thing we are all meant to try to confront together.

But it’s people who rape people. And far more often than not (like, 73% of the time) it’s people survivors know. And it’s on these people to not rape.

Recognizing that this scenario is very different for a multitude of reasons, let’s extend the “it’s on us” theme to cheating, merely to demonstrate its failings in messaging. If I see two people at a party who are drunk and likely to cheat on their partners, is it on me to intervene? No. People who violate the terms of their relationships are responsible for their cheating.

So while I think it’s great that, to quote the White House website, “It's On Us asks everyone—men and women across America—to make a personal commitment to step off the sidelines and be part of the solution to campus sexual assault," the only real solution to this epidemic is for people to stop raping. And I think Obama would be moving us closer to that reality if he put the explicit blame on said perpetrators.

If you like this article, please share it! Your clicks keep us alive!
Tags
It's on us
Rape
Sexual Assault
campus sexual assault
Obama
biden
Jon Hamm
campaign
initiative