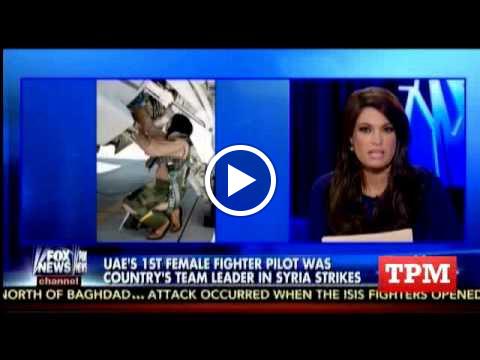 We suppose if we wanted to, we could write about Fox News and their sexist, racist, really-every-kind-of-negative-ist offerings every day. As it is, we generally try not to let them troll us, by pretending like they don't exist. This is precisely what we were doing when we first heard about the egregious “boobs on the ground” comment last week.

That is, until the veterans of the Truman Project wrote an awesome open letter about it.

First Up, The 'Jokes'

Last Wednesday, on Fox News’ The Five, the show was running a segment on the United Arab Emirates’ first female fighter pilot. Kimberly Guilfoyle opened the segment by saying “Hey ISIS, you were bombed by a woman.” She was speaking about Major Mariam Al Mansouri—who apparently led her country’s airstrikes against Islamic State—sending her some serious props, calling her actions “remarkable,” and wishing that America could say something similar. She concluded by remaking that she was happy to see a woman doing this anywhere, adding that it was especially rich as in some Arab countries, women can’t even drive.

Her male colleagues? Well, this is what they said:

Co-host Greg Gutfield: "The problem is after she bombed it she couldn't park it. I salute her."

"Would that be considered boobs on the ground or no?" Eric Bolling added, his grin suggesting he was quite proud of his asinine, 7th grade locker room response.

Guilfoyle, of course, was not pleased:

"Oh my gosh, why did they ruin my thing?" she said as she literally hung her head:

Appalled? Horrified? To reinstate your faith, here’s that open letter we mentioned.

Response From The Truman Project

We are veterans of the United States armed forces, and we are writing to inform you that your remarks about United Arab Emirates Air Force Major Mariam Al Mansouri were unwarranted, offensive, and fundamentally opposed to what the military taught us to stand for.”

They not only go on to directly state “first, foremost, and most obvious to everyone other than yourselves, your remarks were immensely inappropriate” but then begin dropping knowledge bombs about the history of women and aircraft combat:

“As it turns out, women have been flying combat aircraft since before either of you were born.Over 1,000 Women Airforce Service Pilots (WASPs) flew during World War II. Seeing as U.S. Army Air Forces Commander “Hap” Arnold said “Now in 1944, it is on the record that women can fly as well as men,” we can probably guess he thought their parking was adequate. The WASP legacy reaches into the present day; on 9/11, then Lt. Heather “Lucky” Penney scrambled her F-16. Completely unarmed, she was ready to lay down her own life to prevent further devastating attacks on American soil.”

Oh man, and then the kicker:

"Thus the skill of women as fighter pilots is well established. And before you jump to the standby excuse that you were 'just making a joke' or 'having a laugh,' let the men amongst our number preemptively respond: You are not funny. You are not clever. And you are not excused. Perhaps the phrase “boys will be boys”—inevitably uttered wherever misogyny is present—is relevant. Men would never insult and demean a fellow servicemember; boys think saying the word ‘boobs’ is funny.”