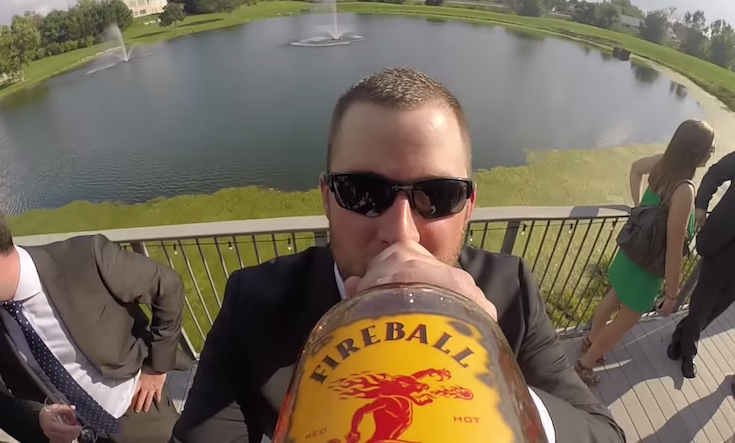 In the world of trending Internet videos, today I bring you a film shot via a GoPro fastened to a handle of Fireball whiskey. At a wedding. I really wouldn't blame you if you clicked away now. Except don't, because the video is kind of amazing.

A groomsman (who appears to be Macklemore's twin) begins the fun with a slick twist of the wrist. Off goes the cap. Various wedding guests whirl about and take sips. The GoPro makes everyone's faces look fish eyed and creepy. It's glorious.

That's not the blasphemous aspect of the video, however. Unfortunately, our beloved cinnamon "whiskey" (can we really call it that?) was recently recalled in Finland. Why? Because it contains a chemical found in antifreeze (propylene glycol). Oh no!

Alright, should we actually be worried? After all, the FDA believes that propylene glycol, used to maintain moisture in beverages like Fireball, is OK in small doses. Other data collected marks propylene glycol as a mere low-to-moderate concern.

Yet, one can't help but wonder—if Europe isn't cool with it, why are we? While the FDA (and the nation in general) scramble to make sense of this liquor fiasco, enjoy the antics of this wedding video. Because nothing says "wedding party" like too much booze . . . even if it does contain a chemical found in antifreeze.