Sophia Loren, Jane Mansfield And The Power Of Boob Envy 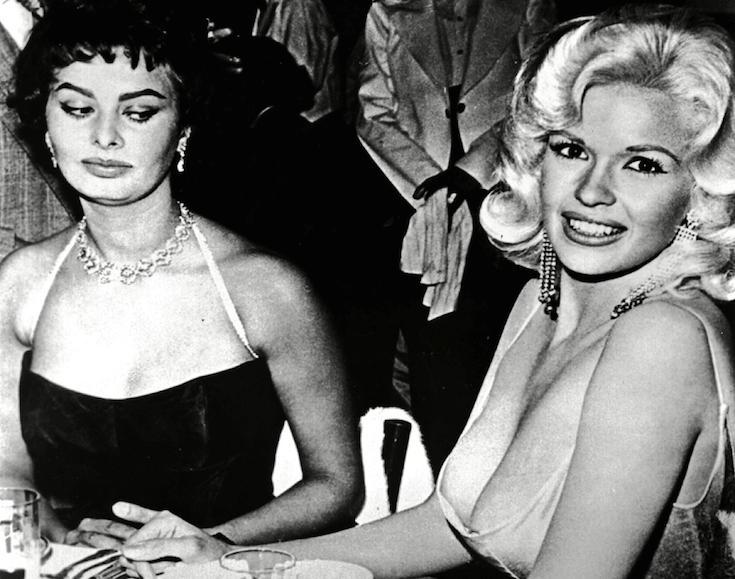 Mystery solved ... was there a mystery? Courtesy of, Twitter

Previously, this infamous picture of Sophia Loren eyeing Jayne Mansfield was deemed an obvious display of cattiness. Today, we learned the truth: Loren was staring at Mansfield's boobs, fearing (hoping?) that they'd pop out of her dress.

As Loren explained to Entertainment Weekly:

"I’m staring at her nipples because I am afraid they are about to come onto my plate. In my face you can see the fear. I’m so frightened that everything in her dress is going to blow—BOOM!—and spill all over the table."

Let's ask the exceedingly important question now: Was Loren suffering from boob envy? As the owner of a surprisingly large rack myself, let me assure you that this does exist.

From my own experience with boob envy, I can tell you that it doesn't develop right away. Just before third grade rolled around, nature bestowed two bug bites upon my chest, and I spent the next two years hiding the evidence of my training bra. Somewhere toward the middle of fifth grade, having boobs became cool; thus, the perplexing journey of boob envy began. Girls approached me for advice on training bras. Some were jealous; others didn't seem to care.

By the end of 7th grade, my formally small tatas blossomed into full-on bowling balls strapped to my ribs. The boob envy intensified. My female peers asked to touch them. "Wow!" they'd exclaim, while getting to second base with me. The attention didn't stop once we left junior high; all through high school, my girlfriends would stare at them openly. Boys, surprisingly, were usually more subtle (not grown men, sadly). Girls wanted to discuss my bra size literally all the time. I was "Big Titty Giana" in several social circles. I actually had to ask certain lady friends to stop obsessing over my boobs, because it made me uncomfortable (though now, I find it hilarious). It's not just me—other women, totally normal except in the boobage department, have had similar experiences.

Today, I still occasionally get asked the same questions—though nowhere near as frequently as I did as a teen. It's not surprising, either. Breasts are not only hyper-sexualized, but held up as an almost mythical standard of beauty. The fact that Victoria's Secret showcases the Fantasy Bra—not the Fantasy Boy Shorts, or thong, or even angel wings—in its elaborate annual runway show illustrates this awe. The highest-valued Fantasy Bra was $15 million. Made of red satin and covered in Thai rubies and diamonds, this is definitely an expensive way to say "America hearts boobies!"

It's not all about bra artists, though (yes, I believe the creator of the Fantasy Bra transcends the term "designer"). Look at how quickly those "Save the Tatas" paraphernalia infiltrated every aspect of decoration: bumper stickers, bracelets, t-shirts and so on. In movies, we see women flashing men as the ultimate distraction technique—like sassy Kat Stratford in 10 Things I Hate About You. People even joke that boobs possess magic powers and hypnotic effects.

That said, I'm not surprised Loren was staring at Mansfield's rack. The only head-scratching thing is that Loren had to cop to it. Didn't we kind of know this all along?