Is It Morally OK To Binge-Watch The Sex Crimes Of Law & Order: SVU? 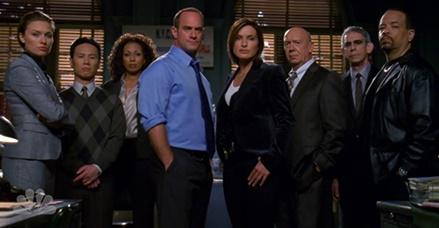 I can't remember when I started watching Law and Order: Special Victims Unit with my current fervor. But it should be noted that I do come from a Law & Order family—my dad owns several seasons on DVD and actual, somewhat scholarly books about the show—and I started watching the original series some time in late middle/early high school.

It must have been in college when my interest turned toward SVU. I remember marathoning it before marathoning was a thing; being home at odd hours of the day between classes and filling my time with episode after episode. Sometimes I watched it for so long that an automated message popped up on the screen, making sure I was still there and didn't just accidentally leave the TV on while I went out for a quart of milk.

About a year ago, I was over at my friend's house. It was in the middle of one of USA's much-trumpeted, weekend-long SVU marathons, and both our Facebook feeds had blown up with posts by people who were glued to their TV, watching. I talked about how I was one of those people who can get sucked into SVU marathons any time, anywhere, and as I kept talking I could feel myself approaching a sudden realization. Then she said what the back of my mind had been murmuring the whole time:

"Yeah, I just . . . I can't watch it. I feel like it just really glorifies sexual violence."

Right there and then, I knew. She's not wrong.

A Phenomenon Is Born

Created in 1999 as a spin-off from the immensely popular Law & Order series, Law & Order: Special Victims Unit has become one of the most popular shows in the United States, and after a decade and a half on the air, it is the sixth-longest running series of all time. During one recent weekend marathon, a 16-hour block of episodes intended to raise awareness for human trafficking, viewership peaked at 2.8 million viewers. And that was for reruns. #SVUDieHards is a thing. There’s even a Sesame Street parody, which TBH makes me more uncomfortable than any graphic attack I’ve seen on the show itself.

Centered on the NYPD’s sex crimes unit, the show is a dark, gritty police procedural that focuses on sex crimes, and has dealt with almost every kind of “special case” there is: Rape. Child molestation. Human trafficking. Exotic animal smuggling rings.

I'm not sure what it is that makes me and the legions of fangirls (viewers are overwhelmingly female) out there still love SVU—many writers have tried to expound on the show's appeal, but no one can form a thoughtful hypothesis as to what makes it so addictive. When you get down to it, it's actually quite a terrible show: The acting is . . . OK. The dialogue, thanks to network censors and copyright restrictions, is clumsy, filled with obvious references to existing companies (FaceUnion.com!) and unrealistically devoid of curse words for a show set in a precinct. Every episode moves at a predictable pace that has all the grace of a container ship: A garbage man/drunk high schooler/lovers leaving the bar stumble upon a body. Captain Cragen puts Olivia and current partner on the case. She goes through a few suspects until she finds a solid lead. Ice-T says something quippy; Munch spouts a nutty conspiracy theory. A young, blonde D.A. comes blowing in and scowls all over the place. The case goes to trial. Justice is, usually, served.

Perhaps it's found success through frankness—when your show revolves around rape, you can't really tiptoe around it. It doesn’t shy away from visual explicitness, either, and has only gotten bolder in the last 15 years. There’s also something downright operatic about it—the villains are obvious; the victims angelic and/or misunderstood—that cuts deep into the ancient heart of drama.

SVU's appeal and success raise a serious question, though, one touched on by my friend in anticipation of another marathon binge-watch. Does the show's dark subject matter, which is only compounded by the parade of episodes served up by USA on weekdays, skew our understanding of the seriousness of sex crimes?

The short answer is, surprisingly, probably not.

Studies show time and time again that a person’s reaction to violent media is informed by a vast network of factors, not simply exposure to it. In fact, the public debate around sex crimes and their seriousness has only gone up since the show's debut in 1999—I’m not saying there's a direct correlation, but who knows.

But even if SVU may have bolstered public awareness of sex crimes in recent years, that doesn’t mean it’s not in need of a little reform. In some ways, SVU is still stuck in the early 2000s, and it can misinterpret the reality of rape, abduction and abuse. SVU, like a lot of TV, deals in stereotypes and skewed data for dramatic purposes. That’s what my friend was worried about, and what still worries me a little.

As a Salon piece recently pointed out, the incidence of crime on SVU’s New York is way, way higher than NYC’s current crime rate—but it has to be, or else the show wouldn’t exist. Though they do a pretty good job of representing the diversity of New York, the victims are overwhelmingly female (1 in 33 men are survivors of an attempted or completed rape). And I’m not going to sit down and re-watch all 350 episodes, but I would wager that the show depicts a suspiciously high rate of false rape reports.

The characters are also made up of trope after trope after trope. Victims are either blubbering runaways from the suburbs or strong, powerful women who have been brought to ruin by rape. Villains are muzzled prowlers or conniving businessmen who try to buy the victim’s silence. Mothers are addicts who just can’t seem to stay clean, even for the sake of their adorable kids. Journalists are meddling weasels. Gay people are always hiding some vice-ridden secret life, and more often than not their sexual orientation is the direct cause of the crime. Trans people are pretty much always portrayed as hookers—just ask Laverne Cox, who played one on SVU in 2008. No, it doesn’t glorify or gloss over sexual violence and those who perpetrate it, but there’s definitely some creative license taken in order to get the story across in 60 minutes.

So am I calling for a boycott here? No, not really. For all its faults, SVU still contains some of the most realistic portrayals of sexual assault, addiction and grief on network TV—not perfectly realistic, of course, but the fact that it makes us uncomfortable means we’re not desensitized yet. But if you find the subjects lurid and the plotlines sensationalistic,  don’t at all feel guilty about not liking SVU—we all watched that awful monkey episode and trust me, no one will blame you for thinking less of it, even if your friends won’t shut up about how hot Stabler is.

But if you're someone who unashamedly looks forward to joining the gang in 1PP on the weekends, don’t feel guilty about liking it, either. Just watch responsibly: Not every victim is helpless, not every man’s a monster, and for God’s sake, not every trans person is a prostitute. And it’s very likely someone you know has been the victim of an assault.

If you like this article, please share it! Your clicks keep us alive!
Tags
law and order: svu
Review
analysis
sexual violence
Rape
statistics
critique
ethics