From Oscar Grant To Eric Garner: A Photo Essay Of Oakland's Protest 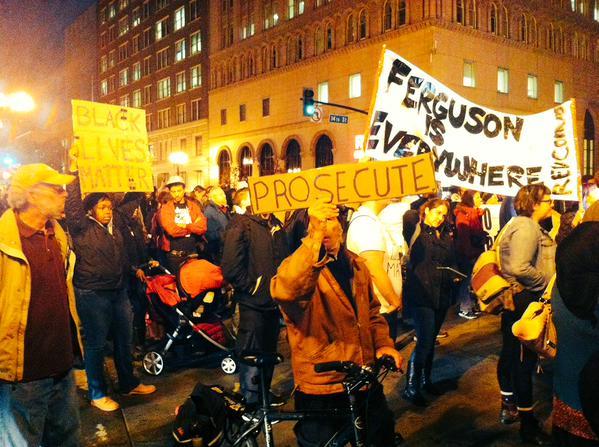 For all of our rhetoric about “freedom” and “equality,” our country is one founded on racism, a racism that plagues and infects our systems and institutions to this day. It’s a racism that renders “justice” a cruel mirage, desperately out of reach for massive swaths of the population.

And though this structural racism is one that is insidious, destructive, and dehumanizing every day, yesterday its egregious manifestation, in the form of a grand jury’s decision not to indict Daniel Pantaleo, the cop who murdered Eric Garner, was

so overt as to be smothering. Even for those who suspected this heinous outcome, had braced for it, that a man’s life could be squeezed out of him by a cop using an illegal chokehold, all while Garner cried out that he was unable to breathe, that a father, a grandfather, could be killed in our streets for allegedly selling loose cigarettes, that footage of his death could be recorded and widely disseminated, and his killer not even be indicted for his senseless death, it all still feels surreal, paralyzing.

Our citizens—our children—are being killed, hundreds of times a year, in our streets. And not only does this continue to happen day after day, but day after day those who do the killing are not held accountable for their crimes.

There is no recourse to be found in all the death, all the abuse, amidst the corpses of black lives senselessly claimed. The fact that the hashtag #BlackLivesMatter has cropped up is excruciating commentary that the humanity of the black community needs to be remembered, reinforced.

As white women, it’s crucial to remember our place in battling the injustices that are ripping our nation apart. White people need to know our role. And though this pain is not ours, this narrative is not one we have any part centralizing ourselves in—as members of the media, we are an occupier of a space, we have visibility. And with that visibility—especially in a company nestled in the midst of Oakland—home to one of the most violent, unchecked and brutal police forces in the country—we can document and bear witness to the fight for justice in a world so desperately in need of it.

To that end, writer Jetta attended last night’s protest, which manifested mere hours after the announcement that Pantaleo would not be indicted. Not claiming a role in the movement against state-sanctioned police brutality, she did capture the courageous work of those who are.

Below is what she uncovered.

Like leaving your house while it's dark and getting to work in broad daylight—there were about 50-60 of us at the BART station when the protest began. Once we stepped onto the street, there were easily hundreds. Organic and flawless—as if people were sprouting in the spaces between marchers:

The police were lined up and waiting at 8th street. They didn't speak or avert fixated gaze through the protestors. Maybe they were looking for something—a reason.

Surrounded at every step. The marchers were boxed in—officers pushing the march forward while others walled off the intersections before affluent neighborhoods.