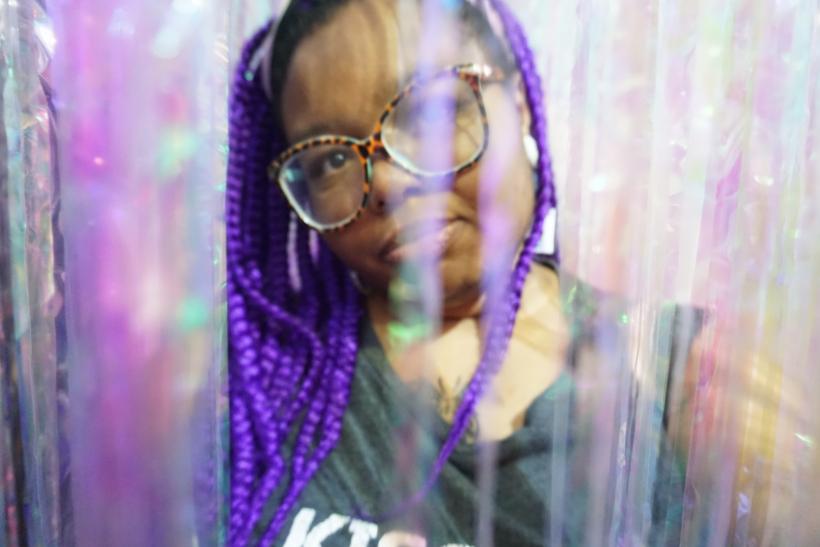 (photo courtesy of the author.)

Growing up in a suburb of Cleveland, I always had many white friends. As most black Americans can tell you, it’s not uncommon to be the only black person in a room — professional, personal, or otherwise. Being the token in one situation or another is something many of us contend with at some point in our lives. Living in a predominately white culture causes many people of color to have to contort and regulate our perceived otherness, all the while dealing with inconveniences that come with not being the majority.

Falling in with a mostly white crowd was not something that happened by design.

When I was growing up, some in my community found that some of my behaviors and interests were “white people things.”

In my instance, an affinity for singer-songwriters of the Tori Amos variety, falafel, and feminist literature, gave plenty of reasons for my friends and family to poke fun at me and question my blackness. In many ways, my gravitation towards white pop culture was a natural one.

Mostly I found people that I fit in with, like Sarah, my long-time friend from high school. Two years older than me, Sarah and I bonded over zine culture, 90’s girl rock, and teen movies from the 1980’s. For a time, we were inseparable, often spending weekends at each other’s houses binge-watching our favorite teen movies and stuffing our faces with junk food. Though our personalities clicked, ignorance and racist undertones could still be found brimming at the surface of our interactions.

While no one was ever explicitly unkind to me, the fact that her father was conservative and slightly racist, was no secret. When it was discovered her 16-year-old sister was pregnant, the one saving grace in the situation was apparently that the father wasn’t black. The underlying message of these people that I’d broken bread with and with whom I’d created connections with was that no possible mistake or ill-thought-out life choice they make could ever be as bad as my race. Regardless of if the intent was overtly malicious or not, the message of what a threat my mere being was, served as a way for them to reduce the existence of black people down to a stereotype.

Soothing egos and tip-toeing around white fragility are particular kinds of emotional labor that have often existed in some of my interracial friendships.

As Robin DiAngelo asserts in their book, White Fragility: “America’s largely segregated society insulates white people from racial discomfort, so when presented with challenges to their perceptions of race and society, they crumble quickly.”

Such was the case when I found myself having a conversation with Ryan, a friend of a friend I had drinks with once while living in Holland. Ryan was a former grade school teacher in America who taught in the New Jersey school system a few years prior. The conversation turned towards race and politics, and I somehow ended up listening to Ryan talk about all the things that were wrong with “the inner city” and his ideas for what black and other minority women needed to succeed.

When I merely suggested that black women, for instance, aren’t an anomaly and that perhaps as a white man he wasn’t in the best position to make such assertions, he got indignant, raising his voice while pointing his fingers and reminding me, “I know, cause I was around those people for three years and saw it first hand!”

At 23 years old, I didn’t have the language to properly articulate my frustration over the erasure at play, so I backed down — as I’d learned to do, lest I be seen as an angry black woman.

Black people often play a variety of roles when moving through the dominant culture. Just like in the movies, I can be a fun and sassy manic pixie black best friend, or, I can be whatever stereotype or trope someone else has already deemed me to be. Despite my best effort to live life on my own terms, sometimes it’s as if I have very little autonomy over such viewpoints.

Instances like this are not few and far between enough for my liking. A few years ago, I unceremoniously ended a friendship after a particularly offensive conversation where a white girlfriend compared me to Bill Cosby, who before being known as a convicted rapist, was known for talking down to the black community, and argued with me that black men get social power from sagging their pants. Perhaps on another day I would have talked it out more with her, tried to educate, or maybe even just ignored her. But that day, I just didn’t feel like it and was tired of being offended in my everyday life and dealings. I ended the friendship quietly, removed her from all social media, moved to China, and never looked back.

Still, despite these many infractions, I do my best not to allow such instances to keep me from meeting people on an individual level. I’ve had great friends and lovers in my life who don’t make me feel subhuman or as if I’m merely a minor character in their production. Over the years, I’ve had to learn to be more discerning with who I let in my life. It’s not just enough for someone to like hip-hop music and the work of Maya Angelou.

For many non-melanated folks, admiring black culture is easy, loving and caring for black people, not so much. Moving forward, I need for people in my life who have or are willing to do the hard work to not only understand the African-American culture, but me as an individual separate from that, and whatever preconceived notions they likely have brought to the table.

If you like this article, please share it! Your clicks keep us alive!
Tags
white fragility
race
racism
black friend