Newsflash: ManServants Are Not A Sign Of Feminist Progress 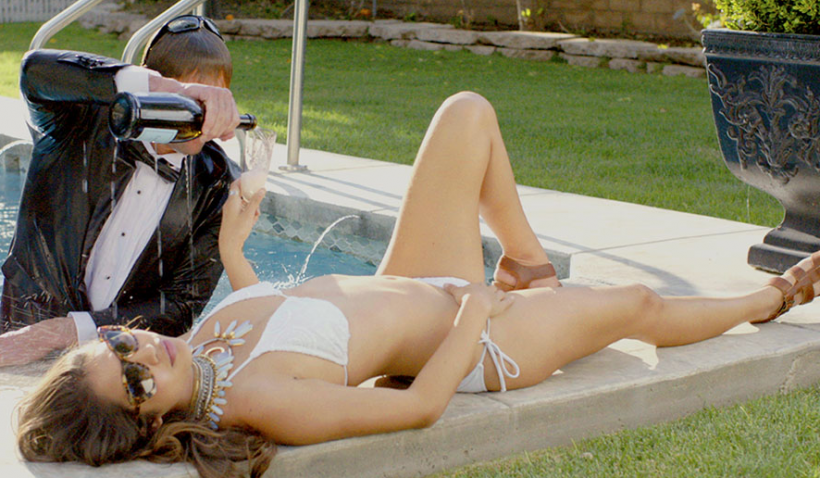 In truth, I've wanted to write about ManServants since this past July, when it first launched to confoundingly good press and lots of wink-wink commentary.

In case you're not entirely sure what this service is, here's a quick and dirty lowdown: Founded by Dalal Khajah and Josephine Wai Lin, ManServant is a "bespoke experience designed to release your inner lady of leisure." In short? You hire a "good-looking" man (whatever the fuck that means) as your personal, non-sexual fantasy to be at your beck and call, to serve your every desire and whim. You design him—kid you not—to have a certain persona, to discuss certain topics, to dress a certain way; you can even name him.

At first glance I found it a kitschy—if mildly offensive—idea designed to spur controversy and some admittedly funny fodder involving women being fawned over and doused in champagne. And then I started feeling really. freaked. out. Angry. Confused as to why more people and publications, which you'd think would lambast this shit and be as angry as I was . . . weren't saying much of anything.

Even Jezebel's Dodai Stewart was drinking the faux feminist Kool-Aid, ending her discussion of men-for-hire with a flippant, "I guess what I'm saying is that I looked on the Rent A Gent website and I need at least two, ASAP."

At the risk of getting too pedantic, I'd like to parse out a few things about this process of hiring a ManServant that I find so damn troubling . . . and deeply damaging to gender relations, feminism and our purported desire to dismantle the patriarchy.

Let's walk through the steps to getting your hands on a ManServant.

1. Cast Your Servant — "Set His Dress Code, Name Him, Just Your Type"

Right from the get-go, the power play is staggering; these men are offered up as empty, naked vessels for you to dress and fill. Choose your aesthetic, personality and desired behavior. Personally? I'm of the "do unto others" mentality. If you would never—in a million years—dress yourself up (or your best friend, mother or sister) as a French courtesan and dust the furniture while men ogled your/their lace-clad bottom while chuckling over cognac and cigars . . . why on earth would you do it to someone else?

I understand that much of feminism is unfortunately predicated on the notion that white, square-jawed men are enemy number 1—as society has historically rendered them demigods of the whole damn universe without ever having to earn said power, other than possessing the right color and genitalia. But attempting to re-appropriate that power by subjecting men to the same degrading paradigm doesn't level the playing field. It fills it with land-mines.

I get the impetus. Not a day goes by when I don't want to holler something sex-nasty at a hot biker-boy pedaling by. To induce, for a fleeting moment, that hot-faced feeling of shame in the face of sexual harassment that men subject women to on the daily. But I don't. I understand wanting to kick a yapping, vicious dog. But actually kicking it is a very different thing. It may feel good for a fleeting moment; the dog may pause, wounded and gasping for breath. But I think we can all agree it will rise, bare its teeth and come after your throat.

Woo the dog, tame the dog, ply it with beef-biscuits until you can have a civilized exchange. Violence—metaphysical or otherwise—begets violence, not understanding. Or a turning of the tables. At best, sheer force, or in this case, faux force under the auspices of "fantasy" (more on that in a minute) is delusional and decidedly not the point. Reconfiguring power structures with the same parts is not synonymous with dismantling the problematic structure itself. Lording one gender over another—perpetuating a hierarchy wherein men or women are subjecting the other to subservience, even if a certain gender has been lording over the other for centuries—isn't progress.

OK. So a big element of this whole ManServant thing is that it's all, by definition, a "non-sexual" fantasy. He isn't allowed to take off his clothes, you aren't supposed to grope each other and sex is strictly off-limits. The men are supposedly "trained"—through the "code of modern day chivalry"—how to ward off sexual advances from prying womanly hands and minds. I find the notion of having your back, feet or hands massaged, or being complimented on your beauty and charm, or being fed cheese and generally being kind of worshipped—basically an evening of high-end foreplay— without ever consummating a sexual act, to be demeaning and weird. The founders have tried to argue that their service is superior to and different than hiring an escort or stripper, but really, it's just more duplicitous.

The service also sexualizes labor, and at $125 an hour, it's a morass of classist servitude—who else but upper middle class women with disposable incomes could afford this?

Also, I'm sorry, but last time I checked, the height of female fantasy was not some ludicrous, prince Valiant, "yes m'lady" garbage where some obsequious fop pandered to my every childish whim. Being challenged is sexy. Being told, "I don't agree with you, but you make a really good point" makes me wet. Having a man render himself invisible, silent or anonymous in an attempt to make my person—physically and otherwise—more visible, is insulting. I don't need to be cherished and polished like some glass figurine.

Lastly, but sure as hell not least-ly, these men are trained to say "yes." A ManServant "always responds with 'As You Wish,'" the site says. There is no explicit conversation about expectations or boundaries, no mutual negotiation of how this night might unfold. Predicating your entire company on the notion that women crave power, chivalry, kindness and adoration so much—that there is such a dearth of being taken care of, heard or respected that you have to hire a stranger to achieve this dynamic—is the same reductive paradigm we as women have been trying for so long to escape. Offering up a male who "is a man, but better" positions actual men as fundamentally broken, as an ongoing disappointment that you have to supplement with a paid servant.

Because no real man in real life could actually "adore" you enough to occasionally carry your purse, pay for a few drinks, compliment your beauty, feed you cheese, babble in French or come to your aid if some drunk, leery-eyed asshole is getting frisky? That's a shitty fallacy to perpetuate. I'd like to believe that every woman on this earth will find a partner(s) who will enact every one of their fantasies.

I find it disturbing that not only does this service exist, but it's been treated as at best, a benign frivolity, and at worst, a sign of actual feminist progress. I guess what I'm saying is I looked at ManServant.com, and I need at least two aspirin, ASAP.