The Reality Of Chronic Pain Is Different From The Movies 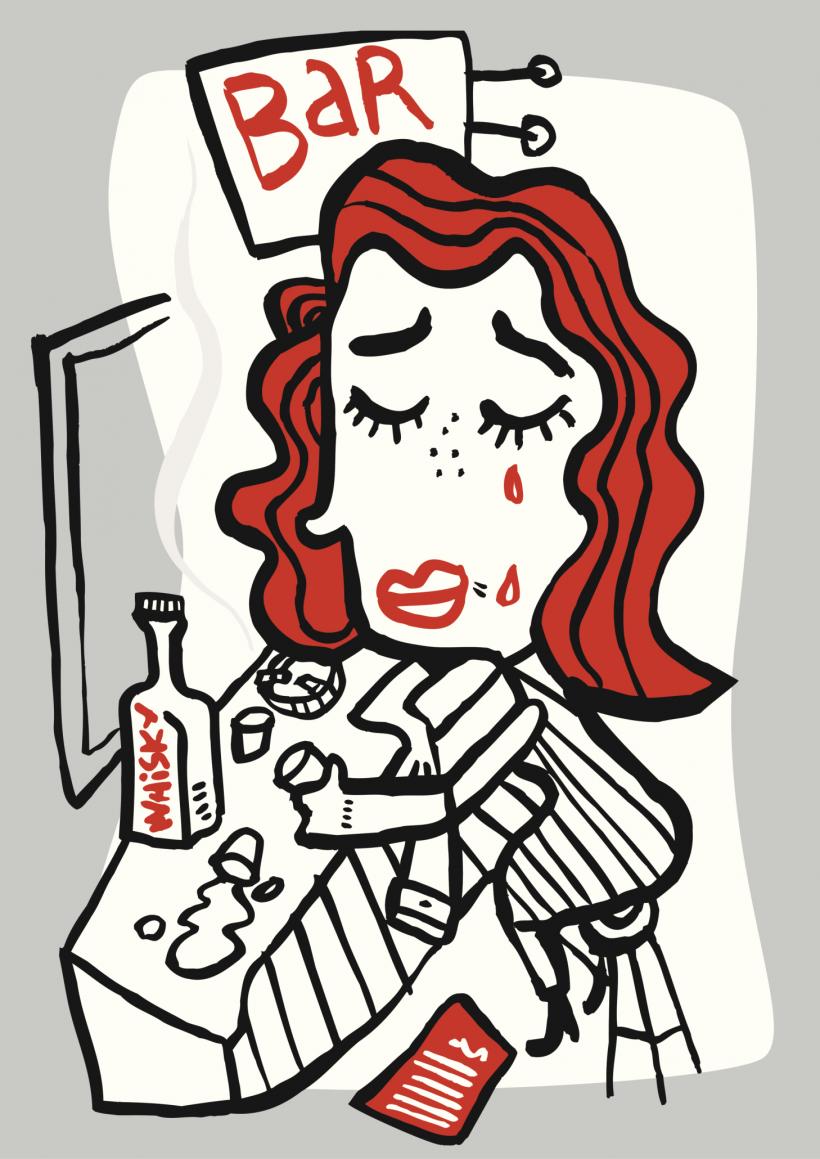 Jennifer Aniston stars in a new film about chronic pain—Cake. But rather than discussing this film as a great step forward for a nuanced portrayal of what it's like for someone to live in physical pain, the media (I feel) has used this movie instead, as a cautionary tale of addiction.

The current hype surrounding Jennifer Aniston is happily not about the glinting power-duo Brangelina and instead about her Golden Globe nomination for Cake, in which she portrays a woman with chronic pain. Additional hype comes from the fact that she was "snubbed" for an Oscar nomination.

As someone who deals with chronic pain—it's an almost daily reality—I waited with anxious anticipation to see Cake, and scoured every review I could find on it. When I finally saw the film I was impressed; Aniston's portrayal of pain was so raw, so intense, and so spot on.

Without giving too much away, one of the scenes I found most captivating was a sex scene early on in the film. Aniston's character takes what we assume to be pain pills before the encounter begins. Let it know that the scene is not sexy. Aniston's character can be seen clinging to a bed post wincing in pain as the camera pans over her contorted face; winces of pain are shown instead of gasps of pleasure.

But rather than discussing this film as a great step forward for a nuanced portrayal of what it's like for someone to experience chronic pain, the media (I feel) has used this movie instead, as a cautionary tale of addiction. And in this decision they've also rendered the movie a flat, one-note concept. They've stripped away the essence of Aniston's character's journey, and distanced themselves from the very point Cake is trying to make: bodies are fallible.

Our society perceive addicts as "other" and the media's portrayal is quick to place blame on their behavior. Surely they must be able to control themselves if they really wanted to.

We are all one bad fall, one car accident, one bodily breakdown from living within a place that is largely unimaginable to those who aren't there. In reflecting on this, I realized that perhaps part of the myopic narrative surrounding Cake's content is that there really are no other recent films that tackle the topic of someone suffering from chronic pain; when things are unfamiliar, it's easier to lack understanding.

Here is my take: Cake is a much richer story than just addiction. It tells a tale of physical suffering, unresolved mental health issues (that only deepen as her pain goes unresolved) and even some social commentary; there is a degree of medical system fatigue. She's not getting better and that's really, really, frustrating. Does she go to uncouth means to acquire medication? Yes. But in addition to examining her questionable behavior, we should also be questioning whether this is a reflection on the medical system's inability to properly address pain management. And support the community struggling beneath its weight.

My first migraine struck around age eight. The pain was so intense I passed out and my parents had to come get me from school. The next migraine I experienced at fifteen jumbled my speech and caused me to forget people's names. I kept walking into walls because my perception of my surroundings was off. It was an individual if painful episode. Finally I began getting migraines on a more frequent basis around the age of nineteen. They were uncomfortable, but I had medication that worked and all seemed manageable

that is until my migraines became chronic and constant. I saved my parents a bundle in electric bills because I spent nearly two months curled up in bed with a migraine that wouldn't go away; if it was daylight, I lay there with sunglasses on because the brightness coming through my window was overwhelming. The kind of migraines I get will make things around me look like a funhouse. Normal lights will look like strobes. Sometimes half my body will go tingly.

I went to my doctor's to try a whole host of things to get the migraine to "break" or ease up. What finally worked? Botox. I still get migraines, but I'm able to function. If I come up against a severe one where medications aren't helpful, an infusion of magnesium often works. And it just so happens I am also limited in what I can take for medication because of a clotting disorder I also have; yes, it's  extremely painful when you get blood clots. (When I had my first blood clot I thought I dislocated my shoulder, but instead it was an entire left arm with no circulation.)

I also have cervical dystonia. From what I understand, my brain sends out incorrect signals to my certain muscles in my neck causing them to get stuck in a spasm. Basically I woke up one morning with a cramp in my neck. I went to the doctor and received muscle relaxers. Instead of getting better, my neck became cramped in a position towards the right.

By the time my parents took me into the hospital I was actually screaming. Just the mere brush of material or a pillow touching my neck felt like my neck was going to rip into pieces. Botox again, fortunately, worked for this. But this also meant a total of about 50 injections between my neck and forehead. It's worth it to function however. My most recent MRI showed that the normal curvature of my neck has begun to straighten out—an effect from the muscle spasms pulling on my neck even with treatment. (Meanwhile I also rely upon essential oils, massage treatments, meditation, and yes, even a shaman healer. Anything I could to take the pain away.)

These are just a few of my pain stories. But I try not to think on them, not to dwell. I remain curious about the stories of others with chronic conditions however; in 2011, an article on WebMD stated that over 100 million Americans had some form of chronic pain. I asked a few individuals, whose identities will remain anonymous at what effect pain has had on their lives, specifically as women.

Erica* is an early twenties graduate student with hopes to become a therapist. She has been in chronic pain for the last decade. She began physical therapy for a nerve condition called Reflex Sympathetic Dystrophy (now known as Complex Regional Pain Syndrome), and instead of getting better, everything remained the same. She has tried a variety of pills—everything from anti-psychotics to anti-epileptics, which can have an effect on how nerves process pain. She also has a genetic mutation to where narcotic pain pills do not work as effectively for her. She is currently $300  out of pocket to see a Kinesiologist. Acupuncture has also been tried. She's willing to try anything to get out of pain.

Beth* is in her thirties and has had been diagnosed with lupus since her twenties. She is a writer who has published a number of young adult genre books all while going for a PhD. This past summer she had a nightmare scenario where she had uncontrolled abdominal pain. The doctors told her that she may just have to go home on codeine and "tough it out" because sometimes "women just have unexplained pain." A few weeks later she was hospitalized again needing an appendectomy, something that could've been addressed sooner if her pain had been taken seriously. For her lupus she has tried going sugar free, gluten free, and every other diet imaginable. It's gotten to the point she wishes people would stop coming up with random suggestions because she's probably heard of or tried them all.

Meredith* is also in her thirties and deals with endometriosis. Because of it she is unable to have kids. It's not just an issue that revolves around a menstrual cycle. It can be completely debilitating to the point where she cannot get out of bed. She feels the attitude is often "take a midol and toughen up" when there are also other symptoms to consider like extreme fatigue. It doesn't just go away or get better, and it's not a condition many know how to empathize with. It can also drastically affect a woman's sex life, and since women are often stereotyped as wanting sex less, the stigma of sex being physically painful can be quite overwhelming. Do you just wince through the pain? Hope your physician takes you seriously enough to find a better solution to the pain problem? Do you hope to find a partner who can understand something that many in the medical field cannot?

Another writer friend of mine, Lizz, who also deals with chronic pain, said something that I feel is entirely on point:

"Those of us with chronic pain do not take drugs to check out, to hallucinate or get high. We take them to cut through the fog pain wraps around our heads, so we are able to function like a normal person. We take them to get back into the world, not out of it."

If only there was a way to make society see this—even when chronic pain is depicted realistically as it was in Cake—it's still misunderstood.

Every one of those women I talked to are going through a daily battle with balancing prescription medication and various holistic methods in order to gain a semblance of normal life. Most of the time individuals with chronic pain are simply not allowing you to see just how much pain they are in because they are embarrassed. Embarrassed because they feel that they are not "strong enough" to cope. Embarrassed because sometimes it feels like they are bothering their physicians because they just wish for once, maybe, these set of pills will work and they won't have to keep calling them complaining or scheduling more appointments. Frustrated because they may need more help than the average person—because even unloading a dishwasher may leave them in debilitating pain for the rest of the day.

Hoping beyond hope that maybe society will someday understand that chronic pain doesn't mean addiction. Just because it isn't able to be seen, doesn't mean it isn't real.