Boobs vs. Brains: Making Amends With My Complicated Body 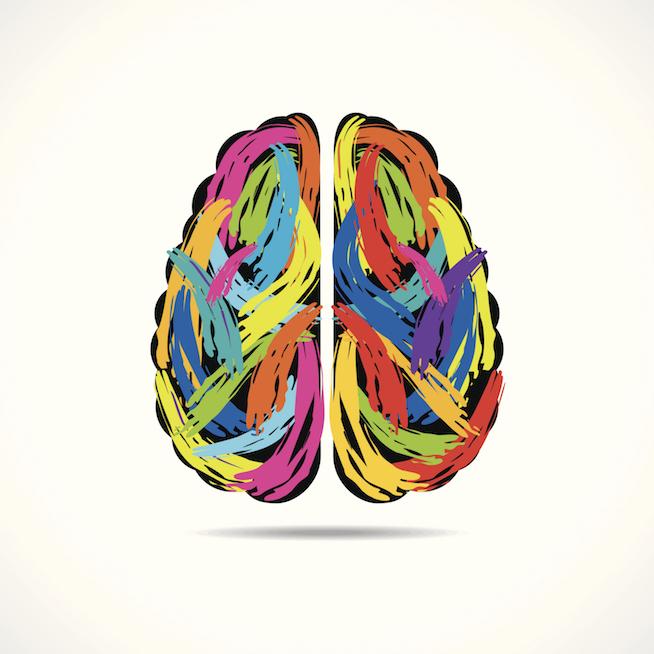 I was done with having a body, so I decided to consider myself merely a brain burdened by a wholly unwelcome and useless meat package. My body was nothing but ugly and too big, accompanied by an occasionally alluring pair of “tits.”

I am an early bloomer. I spoke in full sentences before I was 1. I learned to read when I was 3. I got my boobs when I was 9.

The latter was not a welcome development.

When I got boobs, I also got a body. A body that was (and is) not skinny. A body that women have both mocked and shamed. It’s a body that is simultaneously considered grossly sexual and repulsively large by the male gaze. It’s a hard body to be in.

When I was in the eighth grade, I sat across from two boys in my Algebra class. As I was taking notes during our lecture, I heard them whispering:

“They’re huge. I bet she could rest them on the desk.”

My stomach leapt up to my throat and my throat sunk down into my stomach. I kept my head down and tried to focus on the paper at my desk. I folded my arms over my chest and slouched down, hoping they would stop.

After a few days of trying to put up with their comments, of quietly asking them to stop, of telling them outright to shut the hell up, I finally went to the teacher and requested that they be moved. I told her they were “distracting” me.

They called me a fat bitch.

Around this time, I had a favorite quote by C.S. Lewis, which the Internet now tells me he actually never said: “You do not have a soul. You are a soul. You have a body.”

I did not take it to mean that we are all beings with thoughts and feelings transcendent of our corporal form. That’s not what made it my favorite. It was my favorite because I took it as license to sever myself from my body.

I was done with having a body, so I decided to consider myself merely a brain burdened by a wholly unwelcome and useless meat package. My body was nothing but ugly and too big, accompanied by an occasionally alluring pair of “tits.”

I have mentioned that I spoke and read early in life. These two qualities have stayed with me. I talk a lot. I read a lot more. From my very earliest memories, people have told me that I am smart. Much more often than they have told me I am beautiful or funny or anything else. It’s my thing — the box people like to put me in.

And unlike my body, my intellect is a very familiar, very comfortable box. It is the box I like to put myself in.

Around the year I was in that Algebra class, I set up camp in that box.

For much of my teen years, I viewed myself as nothing but a walking, talking brain. I poured myself into my studies, continued to read voraciously, and gave up all thoughts of the body that I used as I did these things. In my mind, I wasn’t really using my body. My body was just another thing in my way.

I numbed myself to all of the cruel words that had ever been spoken to me regarding my body. I disregarded the high school bully who listed me in the Top 3 fattest girls at school. I forgot the name of the boy who tried to slip his hand up my shorts in the first grade. I made the boys who had jeered at me in that math class nothing but background noise to the formulas I set myself to memorize.

And in doing that, I took from myself everything else my body had to offer. I did not take any joy in wearing clothes. I instead covered myself in baggy men’s shirts to draw attention away from my body, in all aspects. I swam with pants on, sacrificing my natural speed in the water for a way to hide as much of me as possible, to recede yet further into my “smart” box.

I repeated this pattern for years, and it took (and still takes) a lot of work for me to view myself as more than just any one thing. I had bought into the idea that people, especially women, are only ever permitted to exist as one easily digestible dimension of humanity. And that is not a purchase easily returned.

It is hard to inhabit a body that is regarded in such strange and uncomfortably disparate ways — to be taunted for both its size and sexuality, yet told that those two qualities can’t coexist. But it is even harder to live without a body, to ignore a material and tangible part of myself for the sake of not having to confront the challenges it carries.

I am not my brain. I am not my body. I am both, and a lot of other things, including a rather fantastic set of boobs. I am smart, but I am also funny and beautiful and empathetic and a little neurotic. I am a lot more than the space I take up and the thoughts I think of.

I won’t let anyone put me in a box, not even myself.

If you like this article, please share it! Your clicks keep us alive!
Tags
body acceptance
smart girl
body positivity
self image
Self Esteem