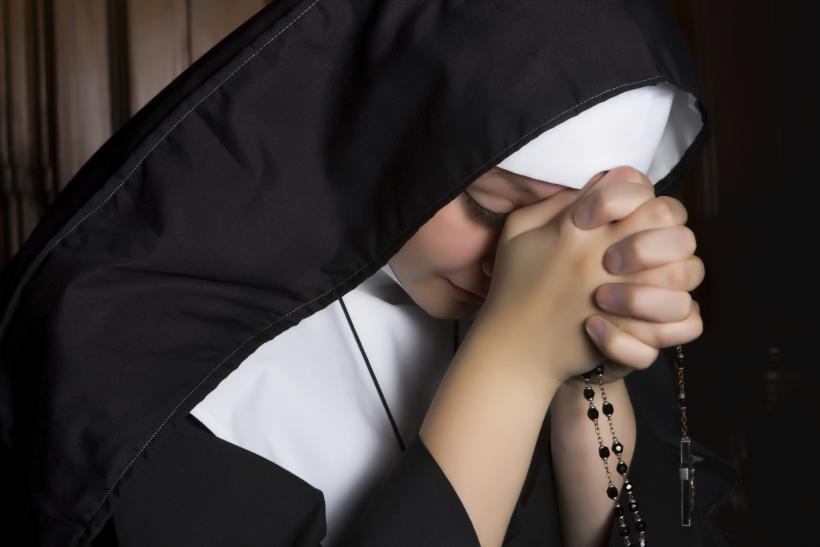 Please God. Don't let it be true. Courtesy of Thinkstock

Holy moly. The Vatican has been planning a Plenary Assembly of the Pontifical Council for Culture to discuss "Women's Cultures: Equality and Difference." (If you're confused about what exactly that means  . . . join the eyebrow-furrowed club.)

While the title has a nice ring to it or something, the Vatican has already undermined the entire project with its own efforts at outreach. The conference "outline" and promotional video have been lambasted and shat upon from on high, below, and just about everywhere as sexist, reductive, and utterly out of touch.

You're shocked, I know.

First came the video, commissioned by Cardinal Gianfranco Ravasi, which features Italian actress Nancy Brilli breathily asking women to submit one-minute videos with the hashtag #lifeofwomen, in the hopes of reflecting on their identity as women.

The clip was (apparently) a hit in Italy, but it was so ridiculed in America for its utter myopia in regards to race and privilege (among Saved by the Bell-esque editing and other ludicrous elements) that the Vatican had no other choice than to remove the English version from its website. But don't worry, Ravasi, like, totally gets it now and is thankful for the insight. At a press conference on Monday, he said:

“It allowed us to understand . . . how we must represent not just the traditional sensibilities of Europe but also that of other cultures and other horizons. It allowed me to realize that the sensibilities were profoundly different.”

It's so meta you guys!

Then came . . . the outline. Which seems to be some sort of heady mash-up of dense rhetoric ("pastoral praxis" and "kerygmatic proclamation" anyone?) coupled with gender stereotypes all wrapped up in a document that looks like it was designed on Microsoft Word in 1994.

Odd doesn't begin to cover it.

While I'd like to applaud the Church's seemingly genuine desire to discuss a very palpable societal problem further compounded by Catholicism, the anti-feminist fodder they've proffered as progressive belies their ignorance . . . even as they vow otherwise:

"It will allow us to gather some aspects of women’s cultures in four thematic stages, in order to identify possible pastoral paths, which will allow Christian communities to listen and dialogue with the world today in this sphere. The expression 'women’s cultures' does not imply any division from men’s cultures, but shows our awareness that there is a women’s 'perspective' on the world and all that surrounds us, on life and on experience. This perspective is a normal part of the fabric of all cultures and societies; we can see it in the family and in work, in politics and the economy, in study and decision making, in communications and literature, in art and sport, in fashion and cuisine, etc. This text has been composed by a group of women in the light of pastoral considerations sent in by our Members and Consultors and will guide us in our reflections.”

The four "thematic" stages include:
• "Between equality and difference: the quest for an equilibrium"
• "'Generativity' as a symbolic code"
• "The female body: between culture and biology"
• "Women and religion: flight or new forms of participation in the life of the Church?"

Guys, it is nothing short of delightful. It toggles between offensive and profound, impenetrable and immature. It's seriously worth reading in its entirety, but here are a few of my favorite quotes and quandaries in no particular order:

"There is a difference between the feminine and the masculine in techniques of problem-solving, in the perception of the environment, in models of representation and cycles of rest, to mention just a few categories. Cancelling such differences impoverishes personal experience. In this sense it is right not to accept an imposed neutrality but to value difference."

"Woman have sincere and painful questions. We seek to listen to their multifaceted discomfort with a rather obsolete feminine iconography in which they struggle to see and recognise themselves."

"It is the female universe that—due to a natural, spontaneous predisposition which could be called bio-physiological—has always looked after, conserved, nurtured, sustained, created attention, consent and care around the conceived child who must develop, be born, and grow. The physicality of women—which makes the world alive, long-living, able to extend itself—finds in the womb its greatest expression."

"'Plastic surgery is like a burqa made of flesh.' One woman gave us this harsh and incisive description. Having been given freedom of choice for all, are we not under a new cultural yoke of a singular feminine model? What do we think of women used in advertising and in the mass media?"

Oh, and did I mention that some people—what persnickity little PC bastards they are—felt that the Vatican's choice of this image . . .

. . . was not the best choice. On the Association of Catholic Priests homepage, one commenter had this to say:

Man Ray had a strong interest in Sade and sadism and there is a recurrent sadistic streak in his artwork,as well as in his relationships with women, characterised by domination and aggression Man Ray photographed women wearing implements of bondage and enacting scenes of torture. He also helped others, like William B Seabrook realise in real life his fantasies of women bondage.

What is behind this choice of female bondage image by the (all male) Pontifical Council for culture?Is it the choice of the group of women (Who are they?) behind this document? What message does it seek to convey?"

But, lest you holler that we're being woefully one-sided, another commentator had this to say:

"Putting aside Man Ray’s personal life and just taking it as an artwork on its own merit—it is an evocative statement about the way women have been treated by male-dominated systems and society. It is a brave choice for the cover because it articulates that so clearly. It certainly resonates with me and I am sure it might with many others.

It illustrates well how many women feel in the church: intellectually decapitated and physically dismembered, like this statue of Venus (the 'divine feminine' impulse dismembered and rendered obsolete by patriarchal religion), a lump of pretty stone (manipulated by the chisel of a male creator into a male idea of feminine beauty), able to sit still and pose nicely and do little else. All the while bound; bound to the church and bound up in its exclusive rules and rubrics that ensure women have no chance to actively participate in any meaningful way.

I love this piece of art—and I think of it as fitting very much with postmodern, feminist art. It is a powerful acknowledgement of the violence that has been done to female spirituality by patriarchal Christianity, the continual suppression of female spirituality and spiritual wisdom and power. Cutting off the head and limbs, tying it up, but, very significantly, the sexual organs are all still there! In theory this body can still have sex and reproduce. She has been reduced to these core fundamentals: sex and reproduction."

Maybe I'm being overly cynical and, ya know, a moral-less atheist, but an institution that has stuffed its golden coffers with the subjugation of women for like 24 centuries trying to command a discourse on the importance of celebrating the female experience . . . sort of stinks to high heaven.

Then again, as 1.1 billion the world over identify as Catholic and the struggle for gender equality has perhaps never been more hotly contested, this is precisely the axe they should be grinding.

If you like this article, please share it! Your clicks keep us alive!
Tags
The vatican
Women's Culture
Catholics
catholicism
the pope
religion
feminism
gender stereotypes