8 Dad Stereotypes That Are Anti-Feminist And Need To Stop 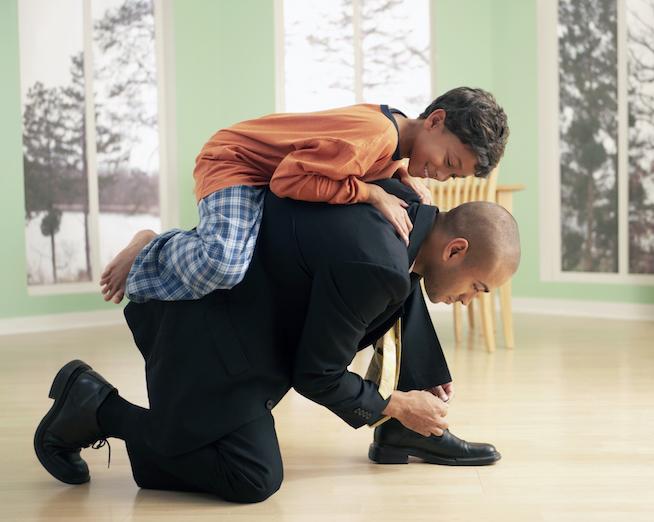 Be a good dad. It's that simple.

Dads don’t like to spend quality time with their kids. Be it because they’re always working and are too tired to give their kids the time of day, or because it’s supposed to be the mother’s job to bond with the children — it’s so untrue.

It’s the 21st century, and there are still dad stereotypes that are not only anti-feminist, but also downright backwards thinking. And they need to stop. But you can’t stop something until you know what it is, so here is a list:

1. Dads care more about having fun than actually parenting. A lot of the images in memes show fathers either riding their children’s bikes while the kids run after them, or the father playing his kids' video games without giving the kids a chance. Or worse, the father enjoying himself while his kids stand around waiting to be showered and put to bed. Not only is this a gross stereotype, but also an incredibly harmful one because it implies that a father’s authority is not on par with the mother’s.

2. Dads are perpetually bad cooks. Despite the fact that some of the greatest living chefs are men and that more and more men openly admit to loving to spend their days in the kitchen whipping up something for themselves or their loved ones, there continues to be this implication that the kitchen in inherently a “woman’s place.” Not only does it devalue the effort a father — and any man, really — puts into feeding his family, it also strengthens the sexist idea that women are no good unless they can cook.

3. Dads care more about maintaining appearances than their child. We’ve all seen that episode of that family sitcom where the male kid wants to do something traditionally “girly,” and the dad goes out of his way to try to convince the kid that he should do something “manly” instead. It’s often played as a joke to make the father seem out of touch with modernity and something to laugh at, but laughing at someone who has been raised with harmful patriarchal ideas is never a solution. Education is. I always see the father succumbing to his son’s wishes instead — never have I seen the episode end with the father realizing that there’s nothing wrong with his son dressing up as a fairy.

4. Dads don’t like to spend quality time with their kids. Be it because they’re always working and are too tired to give their kids the time of day, or because it’s supposed to be the mother’s job to bond with the children — it’s so untrue. Most dads would love to be able to spend all their time with their kids, whom they undoubtedly love to death and want to bond with. Alternately, there are mothers who need a break from their children just to be with their own friends or even just by themselves. Implying that the father never wants to be around the kids and that the mother always wants to be around them is such a ridiculous thing that I don’t even know why people still use this stereotype.

5. Dads only want to be stay-at-home caregivers because they think it’s an easy job. Not only is this untrue, it’s a trope that is insulting to everybody. It insults the mother by implying she’s married to a man who is ignorant, it insults the father by implying that he is ignorant, and it insults the children by implying that taking care of them is either perpetually easy or difficult, with no in-between. Being a stay-at-home parent is often a grueling, thankless, and emotionally draining job. Implying that dads are so dumb that they think that work is only work if you get a paycheck is unnecessary ignorance that needn’t survive in this day and age.

6. Dads are perpetually messy and unable to do housework. Again going back to the sexist stereotype that a woman’s place is in the home, this implies that women are inherently superstars when it comes to housework and men are hapless losers who don’t even know to separate whites and colors or how to change a diaper. Though I have met couples who fit that bill, I have met more couples who shared in the housework despite whether one or both of them had jobs already.

7. Dads who stay at home while their wives bring home the paycheck are weak. I can’t believe that in a time where just as many women choose to have careers, it’s still considered to be anything but normal when a dad decides to stay home and be  the primary caregiver while the wife supports the household financially. It’s a lose-lose for both halves of the couple because the woman gets deemed an uncaring mother and the father a spineless pushover. It’s not considered as taboo if both parents work and leave the kids in the aid of a nanny, but a parent choosing to be the one to raise his or her own children is apparently fodder for gossip.

8. Dads aren’t emotional or can’t/won’t express their feelings. This isn’t just a stereotype that is restricted to fathers, but generally to all men. Stock male characters, especially those who happen to be fathers, are often shown to be hyper-reserved when it comes to emotions. They won’t cry, and they won’t hug or kiss their kids in public. They sometimes have trouble just telling their kids they love them. This idea that dads are (or should be) “masculine,” and thus should be stoic creatures, is a stereotype that needs to change for all men. We need to stop teaching males that they need to “man up” and not show emotion, and we need to stop teaching them that showing emotion is a sign of femininity and, worse that femininity is something bad.

If you like this article, please share it! Your clicks keep us alive!
Tags
parenting
dads
dad stereotypes