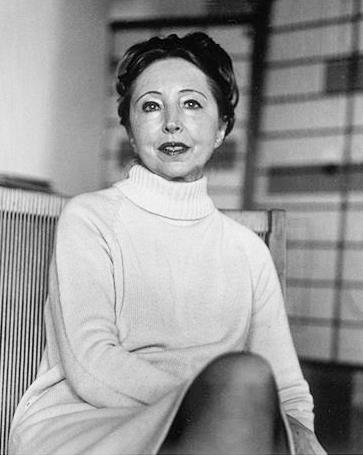 Writing about female sexuality, before that was a thing. (Image Credit: Wiki Commons)

I, too, was once like that, dear reader. This is surprising if you know me. I can be what the more conservative call “too open” because I talk about my body, my feelings, my experiences, and even my period with little to no self-censorship. So I never shy away from gushing about a good orgasm, nor do I shy away from discussing what helped me achieve it.

One of those things is the great diarist and writer of erotica, Anais Nin. Here are five reasons why we should all be getting off to her erotica:

Part of Nin’s appeal is that her erotica is about women’s perspectives, and also from a woman’s perspective. While male literary greats like D. H. Lawrence, and even the Marquis de Sade before him, became notorious for their wildly sexual and beautifully-depraved depictions of sex, even from a woman’s point of view, they really don't compare to the authenticity of a woman writing about women’s sex lives. As great as Lawrence and the Marquis may have been, they still possessed the quintessential patriarchal idea of what women and sex were all about. Their work is steamy and hot, for sure, but it lacks the je ne c’est quoi that Nin’s writing possesses, solely because she was a sexual woman writing about sexual women.

You would think that because Nin wrote most of her erotica in a time when female sexuality was still demonized that her writing would be rife with shaming of its female protagonists. Instead, Nin wrote about women indulging in affairs, obtaining abortions, using their sexualities to their own benefits, and even partaking in incestuous relations. And throughout it all, never does Nin’s narrator look down on, nor degrade these women who make independent choices about their own lives and bodies, who own their decisions - good and bad alike - and aren’t afraid to go out and continue using the near-unheard of privilege of bodily autonomy and total sexual independence.

I dunno about you, but hearing or reading about women who are unapologetic about their carnal desires totally inspires me (and gives me the courage) to become more uninhibited about my own.

Yes, I know there is supposedly a difference between erotica and pornography, but in my opinion, that is just an argument of semantics. Instead, I like to liken Nin’s writing to modern movements in feminist pornography.

In a very brief and vague nutshell, feminist porn aims to make pornography that is by non-cis males and can be enjoyed without making anyone feel like "less than." This means that there are no token ethnic characters, and no profiting off of the degradation or fetishizing of humans. As stated above, Nin ensures that her characters titillate the readers without dehumanizing, shaming, objectifying, or abusing them. On top of that, her erotica was commissioned by a man at a dollar a page, so it was clearly intriguing enough to appeal to men as well as women, i.e. it catered to everyone, rather than a narrow, isolated audience.

I feel like this should be a given. Of course, the fact that Nin was such a badass babe who wasn’t afraid to tackle the issue of female sexuality in a time that was way more oppressive and ignorant of women’s rights makes it hot in general. But still, the stories themselves are steamy. There’s romance sometimes, there’s animal sex other times; the prose is beautiful and vivid, and the images it paints are steamy AF. You can read it on the subway or in the park and enjoy it as solely literature, or you can read it in bed or in the bath and enjoy some quality time with your body; indulging in it means you not only read and sharpen your mind, but you also get to enjoy orgasms! It’s all win-win, so get out there and get off to Nin!

Nin was revolutionary back then, but it can be argued that she still is today. While what she wrote was unheard of at the time, it's still pretty rare to see female sexuality from a female perspective that isn't a cookie-cutter copy of the patriarchal idea of sexuality that we're raised on. Nin's work has women seeking out casual sex, masturbating, having concerns over their bodies, and enjoying their bodies and the bodies of their partners. In none of her stories is there ever a suggestion that these women give much of a damn about how society expects them to be; they happily embrace their lust, and go for what they want sexually.