5 Reasons Why Selfie Shaming Is Anti-Feminist 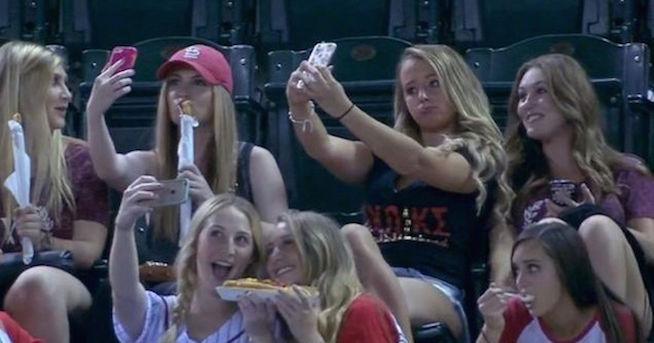 Take a selfie. For feminism.

While there has been much conversation about whether selfies are a good or bad thing, I strictly believe that making fun of or shaming someone for taking photographic evidence of their physical self-confidence is nothing but inherently harmful and just another way that we unknowingly let the patriarchy continue to reign.

There are only a few people around who haven’t seen the video/picture of the group of sorority girls at a baseball game doing nothing but taking selfies. These women have become the butt of jokes all over the Internet and are being held as an example of the supposed egotism and self-obsession of today’s youth (even though, it's worth noting, the selfies were taken during a ballpark promotion that encouraged attending fans to take selfies at the game).

While there has been much conversation about whether selfies are a good or bad thing, I strictly believe that making fun of or shaming someone for taking photographic evidence of their physical self-confidence is nothing but inherently harmful and just another way that we unknowingly let the patriarchy continue to reign. So, the next time you decide to shame someone for taking a selfie (or a million selfies) just remember the five reasons selfie shaming is anti-feminist:

1. It’s a form of casual sexism. While men are also shamed for taking selfies, they’re not shamed as much as women are. From poking fun at the sort of things we do in selfies (“duck” faces, peace signs, etc.) to flat out calling us self-absorbed, making women feel guilty for taking photos of themselves is sexist. Similarly, to shame a man for taking a selfie because it’s a feminine thing to do is also sexist, just in case anyone was unclear.

2. It’s a way to knock women off their supposed pedestals. Women are raised to be modest and humble, and taking selfies conveys the opposite of modesty. We might take selfies because we look spectacular or feel happy and want to share our awesomeness with the world. This alarms a lot of people (as in: “Who do they think they are?”). It scares people that we are daring to embrace ourselves and celebrate our unique beauty.

5. It’s a way of turning women against each other. Feminism is all about equality — bringing women up to the same social, economic, and personal standards as men. While everyone with an iota of common sense will see why this is a necessary thing, there are still those who believe that women should remain inferior. One of the best methods the patriarchy has developed to keep women submissive is by turning them against each other. Selfie-shaming is another way of doing that, because it’s implying that women who don’t take selfies are somehow better than those who do, which is absolutely not true at all.

If you like this article, please share it! Your clicks keep us alive!
Tags
selfie
selfie shaming
feminism
anti-feminist